The best bicep pump workout to blow up your arms

Enjoy the best bicep pump of your life with this 20-set workout. 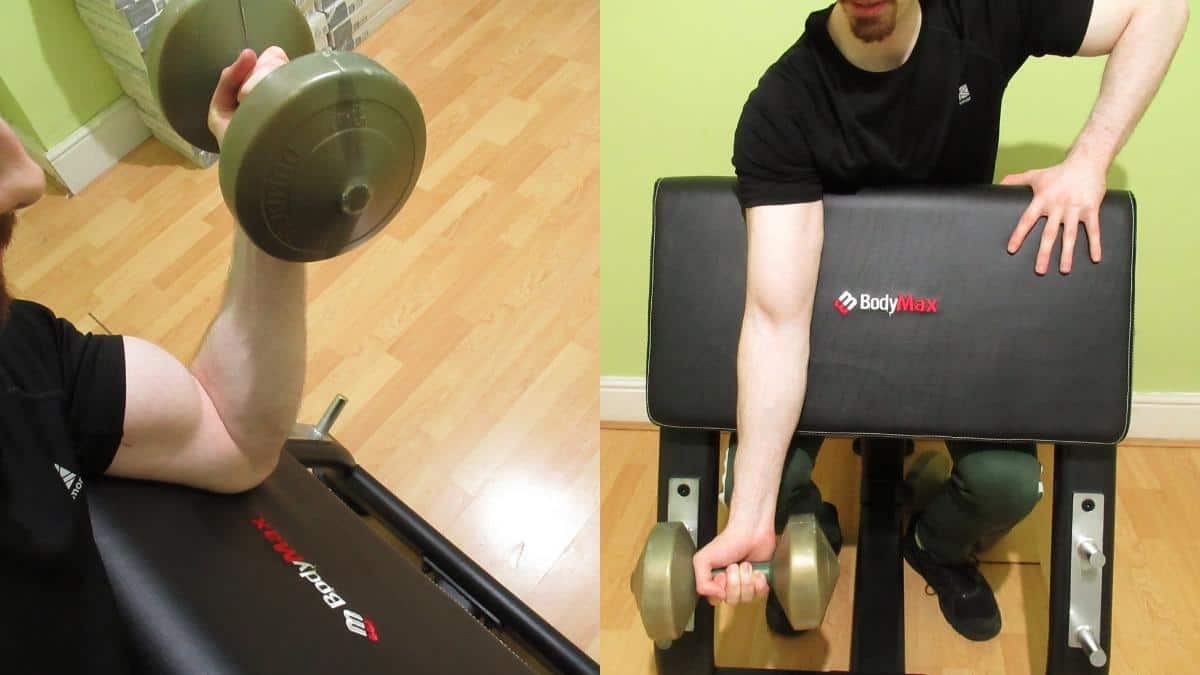 Understanding how the biceps function can help you to get a better workout by picking the optimal pump-inducing exercises. For example, movements that have you curl with your arms in front of your body train the biceps at a shorter muscle length and thus create a stronger pump (more on this later).

We've already created bicep workouts for mass and building muscle. But sometimes, you just want to get a good pump so that your arms look temporarily bigger and more vascular.

That's precisely what our bicep pump workout is for.

This routine will certainly build size, but the primary focus is inducing the best bicep pump possible rather than maximizing muscle hypertrophy.

Performing the spider EZ bar curl will help you to get pumped biceps because the exercise trains your bis at a short muscle length, which is to say, when your shoulders are in flexion. As mentioned, curling with your arms in front of you like this intensifies the peak contraction and thus produces a skin-splitting pump.

The trick is to keep your elbows and shoulders as still as possible while you curl. You don't want other muscles to become involved and then fatigue before your biceps; otherwise, your biceps won't receive proper stimulation. Instead, think about moving the undersides of your forearms toward your biceps while keeping everything else locked in place.

Spider curls are helpful in this regard because you can't swing the weight up with your legs or back because both of these body parts are braced against the bench.

The only downside is that you'll need to wheel a weight bench over to a low pulley, which might not be feasible in all gyms. The good news, of course, is that you don't need a preacher station for this exercise. So since weight benches are far more commonplace than preacher benches, there's a good chance that you'll be able to perform this bicep pump exercise in your gym.

Behind the head cable curls will give you the best bicep pump of your life, certainly on paper and probably also in reality.

Here's what I mean.

Training at shorter muscle lengths produces stronger pumps, whereas training at longer muscle lengths creates deeper stretches. Well, the fully shortened anatomical position for the biceps is when your shoulders are in maximum flexion, which is to say when your arm is behind your head (like in a front double biceps pose).

So, in theory, the behind the back cable curl is the absolute best exercise for pumping up your biceps because you couldn't train your bis in a more shortened or contracted position even if you wanted to; you've reached perfection in the land of bicep pumps.

The only way that other movements could possibly produce a stronger pump is if you're simply more used to them. In this case, you may have a better mind-muscle connection with your biceps on those familiar exercises rather than on this rarely-performed behind the head curl.

You've probably noticed that there are a lot of cable exercises in this routine. Well, that's simply because cables produce a more potent muscle pump than free weights due to the fact that they provide constant tension and thus give your biceps no opportunity to rest until the set is over.

So if you want to get the best bicep pump workout possible, then make sure to implement constant tension training on all of your exercises—in other words, don't lock your elbows out until the set is finished—not just on the cables ones.

Performing drag curls with cables targets the long head of the biceps and intensifies the peak contraction of this already pump-focused exercise.

Even though this routine is a bicep pump workout, you still need to train your brachioradialis and brachialis muscles if you want to achieve complete arm development.

To do this properly, however, you need to put your big strong biceps at a position of mechanical disadvantage so that they don't dominate the movement. Curling with a reverse grip is the best way to accomplish this because it puts the brachioradialis and brachialis in powerful force-producing positions.

Moreover, because you're doing reverse grip concentration curls, you'll naturally get a more potent pump because bracing your arm against your leg helps you to better isolate the target muscles.

How to pump up your biceps

To get the best bicep pump workout possible, there are a few training guidelines that you need to follow. While some coaches will recommend various supplements to help you get a biceps pump, these substances offer, at best, very minor benefits that likely won't be noticeable.

Your best bet is to focus on optimizing your lifting technique for the pump.

That's what this section is all about.

To get a good pump, you need to place your biceps under sufficient tension. Since high repetition sets last longer than low rep repetition, performing a high rep biceps workout is one of the best ways to intensify your pump because they generate more time under tension.

However, there's a sweet spot that you don't want to overstep.

If you train to grinding failure, where you literally can't complete another rep, then you'll have to significantly lighten the weight and/or reduce your reps on your subsequent sets, which isn't ideal for muscle growth.

Instead, you're better off leaving 2-3 reps in the tank on each set. This way, you can still get a great pump without sabotaging your strength for the rest of the workout.

When you train your biceps in their shortened anatomical position (which is to say when your shoulders are in flexion), the peak contraction feels more intense because your biceps are maximally contracted.

Conversely, when you curl with your arms behind your body, you're placing a greater stretch on your biceps by training them in their lengthened anatomical position. This training style is great for building muscle (as is the other), but it doesn't produce the same kind of pump because the muscle simply isn't as contracted.

So if you want to get pumped biceps while you're lifting, then make sure to prioritize exercises that have you curl with your arms in front of your body.

Or to say it another way, the more flexed your shoulders are when you curl, the stronger the peak contraction (and thereby the muscle pump). That's why behind the head cable curls are so effective for pumping up your arms.

If you need to lose body fat to make your pump more visible, then you can see our guide on how to define your biceps for some fat loss strategies.

As a personal trainer, I always advise my clients to use a full range of motion so that they stimulate the broadest possible range of muscle fibers and maximize their bicep hypertrophy.

But sometimes, you just want to get the best biceps pump possible.

And for that, you need to stop your curls just shy of lockout so that the lactic acid doesn't have a chance to escape from your biceps.

I'm not saying that you should perform half reps, although doing partials at the end of a set can certainly enhance your pump. Rather, you should still get a full contraction, but you don't need to lower the weight all the way down.

Yes, you'll probably be stimulating fewer muscle fibers by training with partial reps. But maximizing muscle hypertrophy and maximizing your pump are two different goals (although they’re not 100% mutually exclusive). You could always perform separate workouts within the week to cater to both goals optimally.

You could also do a bicep superset session if you're short on time and want to get a massive pump.

Now that you know how to pump up your biceps as well as which exercises are best for the job, it's down to you. Make sure to really focus on your biceps during every rep. This mental cue will improve your mind-muscle connection and thus enhance your ability to contract your biceps and get a better pump.

While you can definitely perform a specific bicep pump workout that's focused on high reps and constant tension training, you can also get a great pump from regular workouts by improving your mind-muscle connection. Sometimes, when you're struggling to get a pump, it's not that you're training incorrectly; it's just that you need to focus more intensely on stretching and squeezing your biceps.