Will using a wrist and forearm blaster build your lower arms? 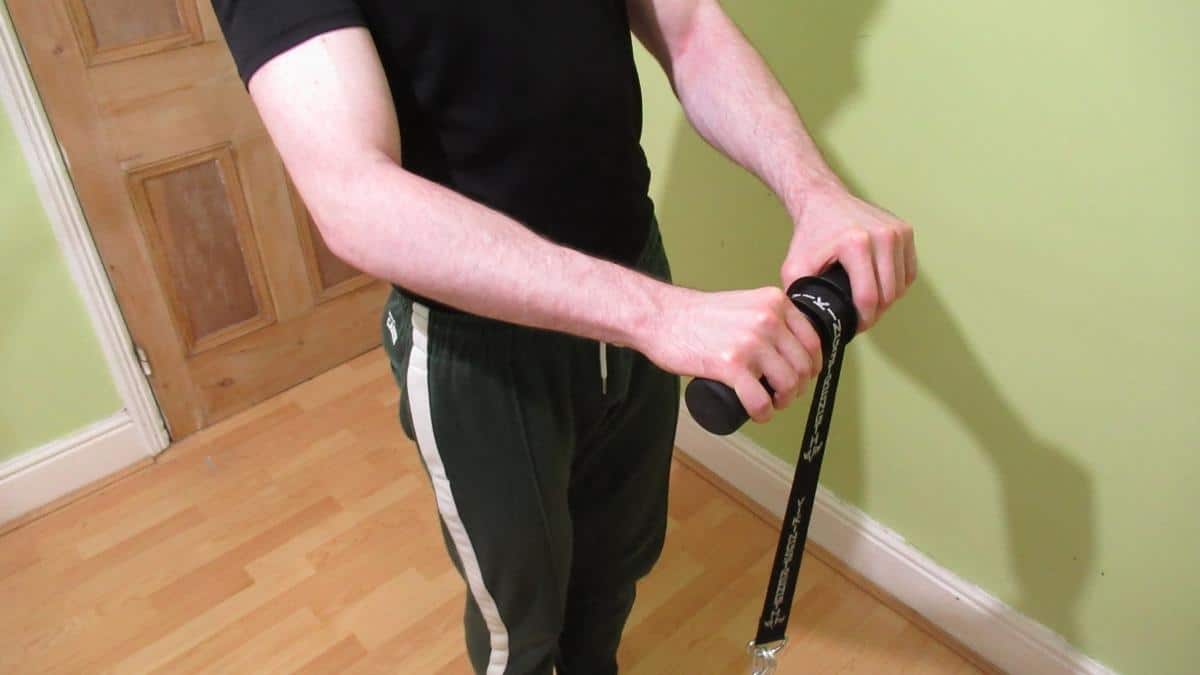 The forearm muscles and their surrounding areas are highly visible on the human body. So unless you want to be the butt of small arm jokes, you need to put some serious effort into building up your forearms.

Using a forearm blaster is one way (perhaps the best way) to do just that. And in this concise buying guide, you’ll soon learn why.

What is a wrist and forearm blaster?

So, what exactly is a wrist and forearm blaster? If you’ve read our best wrist roller guide, then you’ll know that a forearm blaster is simply the more descriptive name for the old-school forearm device known as the wrist roller.

This forearm workout tool increases your lower arm strength, size, and endurance, by making you lift a heap of weights by repeatedly flexing and/or extending your wrists.

Essentially, your forearms are like a crane that has to lift up the heavy load.

The blaster is considered an old-school piece of gym equipment because it’s been around since the 1940s/50s and was used by many bodybuilders of that era as a mass building tool. However, because a no-frills workout device is not very marketable, it’s not as popular as it once was, which means that few people ever realize the benefits of using one.

Instead, lifters flock to the latest new supplement and ignore top-tier training devices like the aptly named forearm blaster.

Is it worth buying a forearm blaster?

I like training at home. But I don’t like having toothpick forearms. So for me, buying a wrist roller and lifting forearm weights makes a lot of sense. After all, it takes about 20 seconds to set the device up, and the pump is just unreal.

Also, forearm blasters are just downright cheap. Most gym machines these days cost thousands of dollars. And while some certainly have their place, they don’t necessarily get better results than lifting heavy iron.

Well, this is precisely the case with the forearm blaster. It’s a cheap product that companies can't make a lot of profit on, but it works just as well as any expensive exercise machine for building the forearms.

So, to answer the question, if you like old-school lifting, want some jacked forearms, or train at home, then I think that investing in a forearm blaster is a smart idea.

What results can you get from using a forearm blaster?

Let’s start with the obvious: You’re going to get bigger lower arms from using a forearm blaster—if your diet and recovery are on point. These gains will come naturally because you're constantly using your flexors and extensors to keep the weight moving.

But you're also working your crushing grip strength. This is because you need to grip the bar tightly while you're repeatedly flexing your forearms to move the weight. So it won’t just be your main flexors and extensors that are getting hit; all of those small gripping muscles are going to get a heck of a workout too.

A forearm blaster can produce comparable results to lifting free weights—without going to the gym.

Having a firm grip makes you stronger on your compound movements. Plus, it’s positively correlated with life expectancy, and it gives you a ridiculously masculine handshake. [1]

You can also see results from using a forearm blaster fairly quickly because most people aren’t used to training their forearms particularly hard. So when you’re forced to repeatedly flex and extend your forearms to keep the weight moving, your lower arms are going to respond by getting bigger.

One round in a forearm blaster workout is when the weights get to the top or when the device clicks (depends on your particular piece of equipment).

A set is a collection of rounds. Typically you’ll do 1-4 rounds per set when using a wrist blaster for your forearms.

As for how many sets you should do, well, that depends on how advanced you are with regards to the forearm blaster. If you’ve never used one before, then 2 sets of 2 rounds will tax you a lot. But if you’re a seasoned pro, then you might get more from doing 3 sets of 3 rounds or something like that.

Even just 2 or 3 rounds will give you forearm DOMS if you've never done this intense drill before.

Of course, you can just do one major set and perform as many rounds as possible. This is best done when you’re using your forearm blaster as a finishing exercise so that you can still grip things earlier in the workout. [2]

Here’s a sample forearm blaster workout routine in case you need some inspiration. But for best results, be sure to factor in your level of advancement (how strong your forearms are) and what other work you’re already doing for your lower arms.

Also note that these weights are just for demo purposes. If you're new to this training device, then you'll need to experiment with different weights to learn which is the most appropiate.

The verdict on wrist and forearm blaster products

I’m a big fan of old-school training devices because they’re usually far better value than these expensive, modern machines. The forearm blaster is no exception to this.

If you don’t fancy going back to the gym just to train forearms, then using a forearm blaster at home is a great idea. Your gym buddies will wonder how your grip got so strong. But if they’re the arrogant meathead type (not that all meatheads are like that), then maybe keep the secret to yourself.

Other than that, don’t forget to treat the forearm blaster like anything else: Use progressive overload and always keep your form tidy. This way, you'll get great results from day one, and you won’t have to do the dreaded weight reset because your technique won’t become sloppy.

Bicep exercises and workouts for mass