While a good forearm blaster device or wrist roller will certainly add mass to these muscles, most products come with thin handles that are no good for stimulating the vital gripping muscles in your hands and fingers.

As such, many lifters end up with a weak grip and poor crushing strength that lets down their performance in the gym because they can’t hold onto weights during max effort attempts or for prolonger periods of time during high volume training.

But the wrist blaster from Core Prodigy promises to change all this. With its thick cylinders and spheres (there are 2 models), this wooden wrist exerciser claims to recruit more muscle fibers in your forearms, fingers, and hands than the run-of-the-mill wrist roller. But how does it stand up to scrutiny? 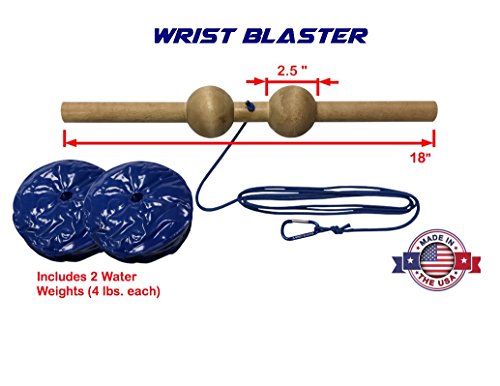 Core Prodigy was founded in 2014 because the creators felt that most fitness equipment was boring and out of date. And I couldn’t agree more. Most wrist rollers are carbon copies of each another that bring nothing new to what’s fast becoming a a junk-filled fitness industry. In fact, I suspect that many brands actually use the same cheap suppliers in order to keep costs down.

The Wrist Blaster is different. Each model is handmade in the USA from sturdy birchwood. Therefore, it’s unsurprising that the units also have a 160lb weight capacity, which is well above the 50-100lb industry average.

First off, there’s the cylinder version, which measures 24″ long and includes two thick cylinders that each measure 6″ long and have a 2.5″ diameter. This model is the most similar to a traditional wrist roller.

The main difference is that it offers two gripping positions. You can place your hands on the outside of the blaster to use the thinner grips (1″), or you can keep your hands on the cylinders to take advantage of the aforementioned 2.5″ grips and the extra forearm stimulation that these thick handles naturally provide.

The other option has 2.5″ diameter spheres (balls) rather than cylinders, which results in a design that’s 18″ long, so 6″ shorter than the cylinder version. Again, you can optionally place your hands outside the spheres to use the standard 1″ grips and reduce the activation of your hands and fingers.

Both models come with water weights that provide 4lbs of resistance apiece when fully filled up. This weighting method is ideal if you don’t have access to weights and/or want to be able to blast your forearms from anywhere.

That said, both designs are still 100% compatible with weight discs, dumbbells, and other traditional wrist roller resistance methods.

But as for which is more challenging, Core Prodigy says that the cylinders offer slightly more difficulty. Of course, the main factor that determines how challenging the exercise will be is the amount of weight that you’re lifting. Yet, if you want a different kind of stimulus to that provided by regular wrist rollers, then you might want to give the Wrist Blaster Sphere a shot.

It’s widely known that the majority of wrist rollers (and indeed most gym equipment) are not made in America or in whatever country the company is based. [1] Instead, most brands purchase lousy products from the same cheap suppliers and then try to pass their roller off as some fantastic new forearm device.

But they can’t pull the wool over my eyes.

I’ve tried poor-quality wrist rollers for myself. And although they might seem like good value for money, it’s hard to give them any praise whatsoever because most leave you with muscle imbalances since the cords always become lopsided during your workouts.

But that’s not the case with the Wrist Blaster. This solid device is handmade in the USA from sturdy birchwood. As such, it’s naturally a lot more durable than the regular plastic wrist rollers and even those made from hollow metal.

Yet, despite the damage-resistant construction, the Core Prodigy Wrist Blaster is remarkably light. You could easily slip it into your gym bag or take it with you while traveling because it only weighs 2lbs.

The Wrist Blaster comes with two water weights that each provide 4lbs of resistance when fully filled up. As mentioned, this included freebie makes the Wrist Blaster the ideal training companion if you don’t have access to weights. Believe it or not, 8lbs is actually more than enough wrist roller resistance for a beginner or intermediate lifter.

But if you’re in the pursuit of truly colossal lower arms, then you can pound your forearms with up to 160lbs of resistance thanks to the Wrist Blaster’s heavy-duty cord and carabiner.

This is around 2-3x as much as the industry average weight capacity for a wrist roller. So it just shows that people at Core Prodigy were serious when they said that they wanted to invent more effective products that were actually fun to use. [2]

Well, using the Wrist Blaster might not seem like fun when your forearms are on fire. But you get the idea. We’re talking about genuine innovation here. 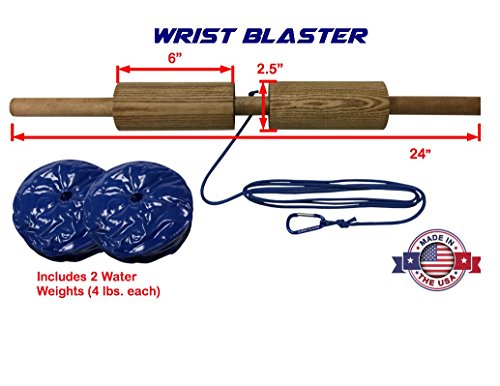 The main difference is that on one model, the grips are cylinders, and on the other, they’re small spheres or balls.

While the cylinders are a bit more challenging, don’t let that put you off getting the sphere version if you want to try something different.

To my knowledge, there are no other (worthwhile) wrist rollers available that offer spherical grips. So if you want to activate muscles in your hands and fingers that you might not even realize you had, then getting the Wrist Blaster Sphere is a great idea.

But if you just want to blast your lower arms without learning a new gripping technique, then you’ll most likely prefer the cylinder version. It has an old-school feel but with a durable, modern design that will undoubtedly withstand many heavy and intense workouts for years to come.

Should you get the Wrist Blaster for your forearms?

I hope that you found my Wrist Blaster review and comparison helpful. I’m pleased to recommend this affordable wrist roller to you if you want to increase your forearm strength, size, and function.

Due to having two different grips (1″ grips and 2.5″ grips), the Wrist Blaster offers the best of both worlds; simple handles for when you want to focus on lifting heavy, and think cylinders/spheres for really working those often understimulated muscle fibers in your forearms, fingers, and hands.