Hammer curls vs bicep curls: What's the difference between these two dumbbell drills?

We pit hammer curls against biceps curls to find out which is best for muscle growth and strength development. 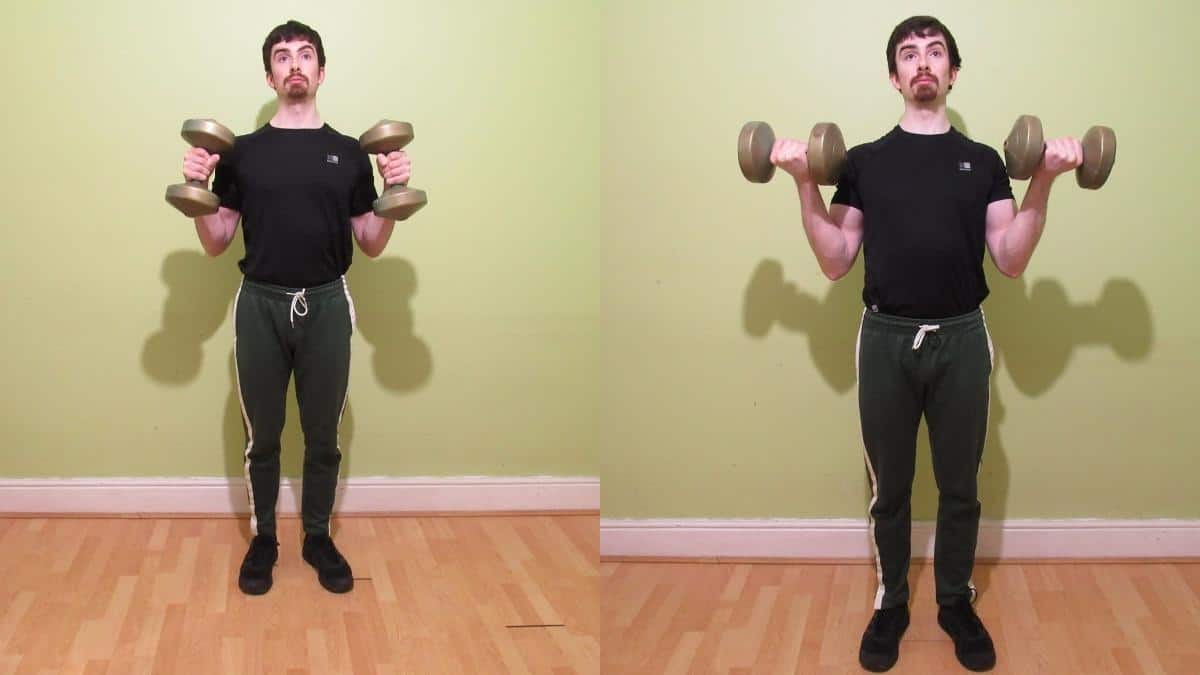 In this detailed hammer curl vs bicep curl comparison, you'll learn which of these two immensely popular exercises is most effective for building the bicep brachii, brachioradialis, and brachialis—the three prime movers in any type of curl.

Let's see how the hammer curl compares to the bicep dumbbell curl.

This section compares dumbbell curls vs hammer curls (as well as bicep curls in general). If you want to see how hammer curls stack up to barbell curls specifically, then you can check out the next section for a full rundown of the differences.

Muscle activation is the main difference between hammer curls and bicep curls. While the former is better at working your forearms, the latter is much more reliable for building your biceps.

Dumbbell curls have you lift the weights with a supinated grip, which is to say with your palms facing up. The act of turning your hands from a palms-down to a palms-up position is known as forearm supination, which is one of the main functions of the biceps (the other is elbow flexion).

Knowing this, you can preferentially target your biceps by curling with your palms facing up. This grip results in better bicep activation because the muscle is highly contracted. Try it for yourself, if you want. Rotate your palms while holding your bicep and feel it tense up!

Hammer curls indeed train the biceps via elbow flexion, which, as mentioned, is the other primary biceps function. However, since you're curling with a neutral grip, the forearms aren't maximally supinated, which in turn means that your biceps are at a mechanical disadvantage [1] since they can't produce as much force when they're not fully supinated.

The Brachialis is a muscle on the side of your arm that lies beneath the biceps. Its only function is elbow flexion, which is to say that it helps to decrease the distance between your upper and lower arms.

Although the brachialis is highly active during bicep curls, it's active to an even higher degree in hammer curls.

Because, in regular curls, the biceps are doing a large part of the lifting. But in hammer curls, the biceps are at a mechanical disadvantage due to the lack of forearm supination, which means that they can't produce as much force. As a result, the brachialis (and brachioradialis) has to pick up the slack and help your biceps out in lifting the weight.

Another critical difference between hammer curls and regular curls is the specific forearm muscles that they work.

You can lift more weight on hammer curls than on regular dumbbell curls. This is because your biceps have extra help from your brachioradialis—which is a powerful elbow flexor—when you curl with a neutral grip. So in terms of overall arm strength, hammer curls are the clear winner.

But if we're talking about strength on a per muscle basis, then it depends on your goals. If you want stronger biceps and forearm flexors, then normal curls are better. But if you want a stronger brachioradialis, then hammer curls are the superior choice.

As for which has better carryover to compound movements—where you can really test your muscle strength—it again depends. Regular curls will have more carryover to movements like chin-ups, which you typically perform with an underhand, bicep-dominant grip.

Hammer curls have better strength carryover to overhand rows and the like because both exercises place significant emphasis on the brachioradialis. So for optimal strength development, you might wish to perform both exercises.

Despite being one of the easiest exercises to perform in the gym, many lifters still struggle to perform curls with the proper form. Ego lifting is the main reason for this. Some people would rather look strong in front of their fellow gym-goers than actually put forth the discipline to develop true strength.

Hammer curls are more straightforward to perform than bicep curls because they're a pure elbow flexion exercise. In other words, you're just lifting weights straight up and down because no turning of the wrists is required.

Dumbbell curls, while still reasonably simple to execute, are slightly more complicated to perform than hammer curls because you have to lift with supinated forearms. It's also recommended to rotate your wrists into a neutral position as your lower the weight on a regular curl so that you don't strain your forearm flexors, which is a big problem with barbell curls.

As a result of this extra rotation, dumbbell curls require a bit more skill to execute properly. Hence, hammer curls may be better for beginners.

Put simply, there are far more kinds of bicep curls than hammer curls.

In practical terms, however, this difference isn't overly significant because it's not as if you're going to perform 50 different kinds of bicep curls in your workout.

Still, having extra variety at your disposal gives you more opportunity to try different exercises and see which ones you like the most. Variation also helps to keep your training regime fresh and exciting because you can always swap exercises if you get bored of a particular movement. [3]

From the point of view of a bodybuilder, there's nothing quite like the pump. Not only does the pump temporarily inflate your muscles and make them look larger while you're lifting, but it can also lead to more hypertrophy in the long run.

In terms of overall muscle pump, it's hard to call the winner. But on a muscle by muscle basis, the judging is much easier.

If you want to get those bicep veins popping, then standard curls are your best bet because they produce a much more intense bicep contraction than hammer curls. Regular curls also heavily work the forearm flexors, which can look really impressive when they're pumped up because the veins tend to become highly visible.

Conversely, hammer curls are the better choice for pumping up your brachioradialis, which can make your lower arms look thick and wide when well developed.

Now that we've compared hammer curls vs regular curls (i.e., dumbbell curls), it's time to see how the former stacks up against the most popular bicep drill of all time: barbell curls.

The verdict: Should you do hammer curls or bicep curls?

Now that we've reached the end of our hammer curls vs bicep curls debate and thoroughly compared the two exercises, it's time to answer the ultimate question: Which is best and why?

If you could only choose one exercise, then regular bicep curls would be the best choice. This is because they're more effective than hammer curls for building the biceps brachii, which is the muscle that most lifters want to target with curls.

While dumbbell curls aren't as good as hammer curls for building the brachioradialis, you can work that muscle with other, more specific exercises such as reverse curls.

Hammer curls can certainly build impressive arms, but they're more of an overall mass-builder. In other words, they don't train the target muscles optimally in the sense that regular curls are optimal for the biceps due to their palms-up positioning.

I hope that you enjoyed this bicep curl vs hammer curl showdown. As you can see, regular curls just edge it. But as we explained during the comparison, the best drill for you depends on your goals and personal preferences.