Learn the key differences between these two popular bicep-building exercises. 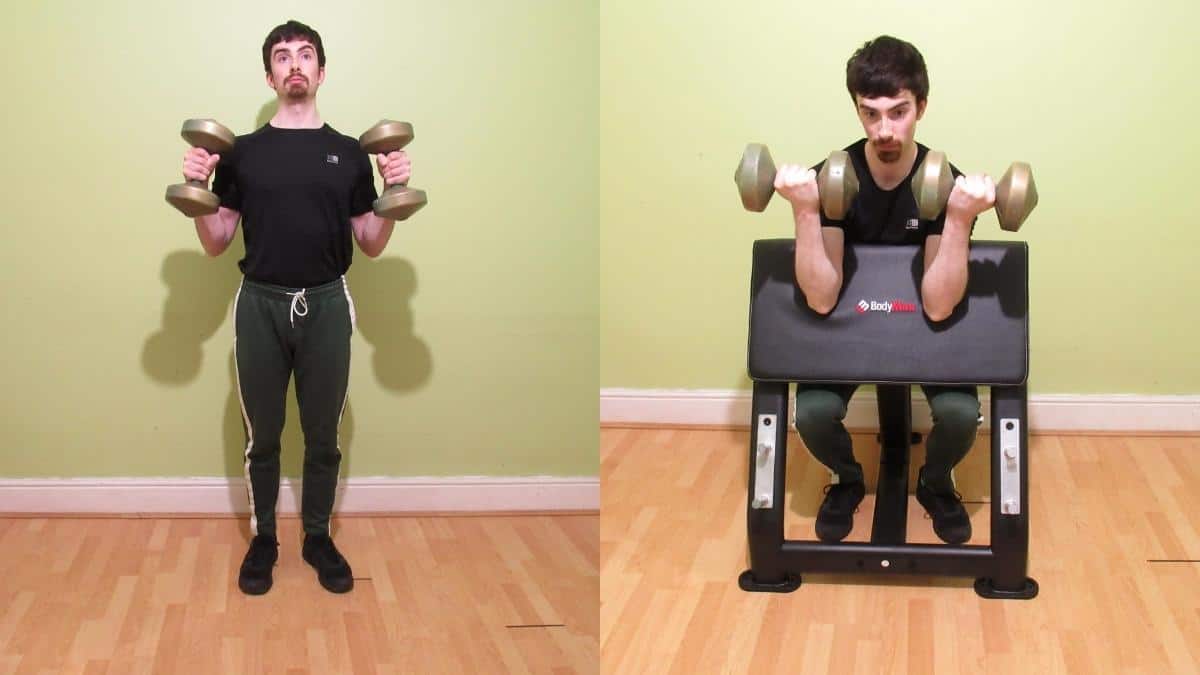 Both hammer curls and preacher curls train the primary biceps function, which is elbow flexion. The preacher curl exercise, however, also work the second major bicep function—forearm supination—because they have you curl with your hands in a palms-up position.

This comparison takes each category—strength, hypertrophy, skill—and discusses which of the two exercises is best for achieving each goal. Let's see which one is right for you.

You can also see our dumbbell hammer curls guide for a full tutorial if you want to learn the correct technique.

Which is better for bicep growth and strength?

Most people who lift weights want to make their biceps larger, so that's where we're going to begin the hammer curl vs preacher showdown. From a hypertrophy standpoint, which is to say from a muscle growth perspective, sufficient training volume [1] and usage of the correct technique are the two most critical factors that determine the quality of your results.

However, if you want to maximize your bicep development, then you can gain a valuable edge by making preacher curls, rather than hammer curls, your primary exercise. This is because your biceps are most active when your forearms are supinated, which is the exact position that the preacher curl puts your arms in.

Moreover, the preacher pad makes it really easy to isolate your biceps. Unlike with hammer curls, you can't cheat the weight up when you're sat on the seat with your arms braced against the pad. Therefore, your biceps are forced to do all of the heavy lifting because your other body parts—shoulders, legs, hips, etc.—couldn't help out even if they wanted to.

Hammer curls, on the other hand, place the biceps at a mechanical disadvantage, which means that they're less able to produce force, and so the brachioradialis has to take over the reins.

Which is better for the forearms?

As mentioned, hammer curls take your biceps out of their optimal supinated position and thus reduce their ability to produce force. As a result, your brachioradialis [2] has to pick up the slack and, with the help of the brachialis, perform the majority of the lifting.

Preacher curls still train the brachioradialis, but not to the same extent as hammer curls.

While it might be tempting to stick to palms-up exercises if you're in pursuit of beefier biceps, a well-developed brachioradialis can transform the appearance of your arms as a whole by making them look thicker and more substantial.

But if we're talking about the forearm flexors, then the preacher curl is actually the superior choice. That's because you naturally flex your wrists a bit (the main function of the flexors) as you curl the weight during preacher curls. Hence why you often feel a forearm pump.

Which exercise is easier to execute?

On the one hand, you could argue that hammer curls are easier to perform because all you have to do is lift the dumbbells straight up and down. With preacher curls, if you're using dumbbells, you should ideally rotate your palms during the exercise, which adds another level of complexity to the movement.

But on the other hand, you could make a strong case for preacher curls being more straightforward because the addition of the preacher pad makes it easier to stabilize the weight. As such, you can focus all of your attention on simply training your biceps rather than having to balance the bar or dumbbells.

In terms of accessibility, while you can definitely do the preacher curl at home, the hammer curl is still easier to set up because you only need a pair of weights.

Which should you perform first?

This depends on your goal.

If, like most lifters, building the biceps is your biggest priority, then start your arm workout with preacher curls. After all, they're one of the most effective exercises for isolating the biceps because the pad makes it virtually impossible to cheat the weight up.

Yet, if your brachioradialis is lagging behind your biceps, then it's a good idea to do hammer curls first. This way, you can improve the symmetry of your physique while still sneaking in some bicep stimulation.

Should you do hammer curls or preacher curls for your biceps?

As we established in our hammer curls vs preacher curls debate, the most optimal exercise depends on your goals. For example, if you just want to build your biceps, then preacher curls are obviously the better choice because they fulfill both of the main biceps functions. Hammer curls, on the other hand, only train one bicep function, which is to say elbow flexion.

Conversely, if you want to thicken up your forearms, then your best bet is to perform hammer curls. This is because hammer curls put your biceps at a mechanical disadvantage and thus reduce their ability to produce force, which means that your brachioradialis has to do the majority of the lifting.

Of course, for optimal results, you can do both movements. Just be sure to start with whichever exercises prioritizes your weak muscle groups.