Discover the key differences between reverse curls and hammer curls and learn which is best for muscle growth. 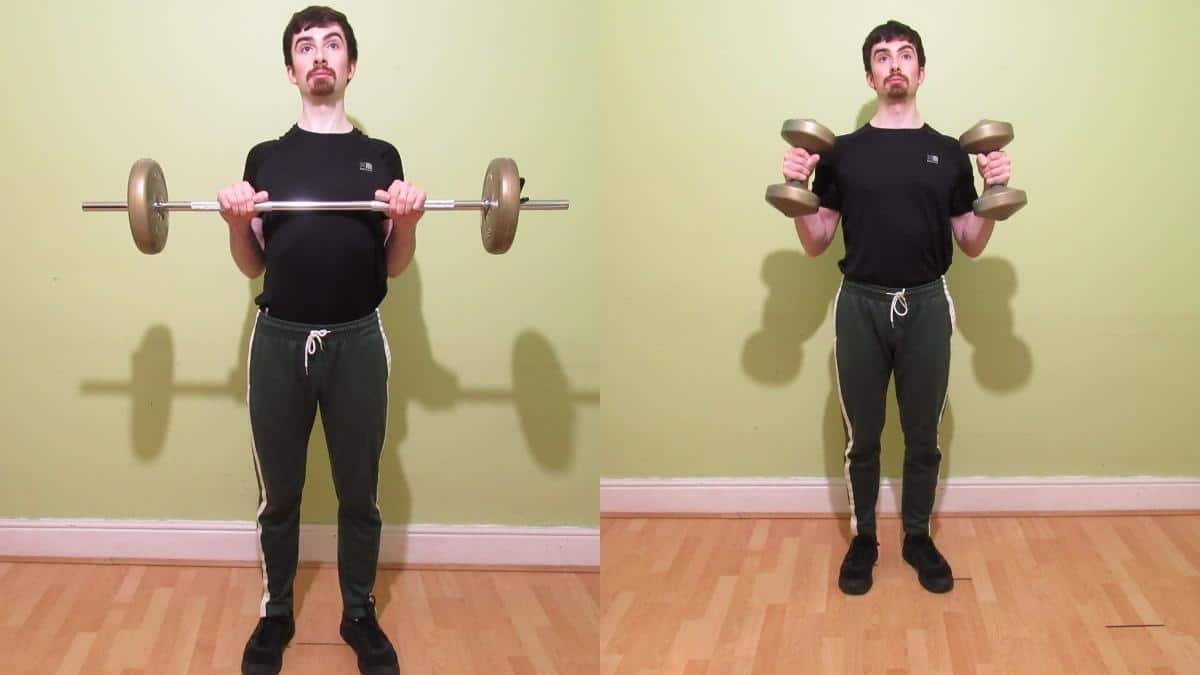 In this detailed yet practical hammer curl vs reverse curl debate, we'll discuss which exercise is best for building the biceps brachii muscle and which is optimal for developing the brachialis and brachioradialis.

See our dumbbell hammer curls guide if you're a beginner because it will help you to learn the correct technique and understand the pros and cons of the exercise.

Likewise, you can see our guide to reverse curls to learn more about this overhand exercise and its variations.

You can also read our hammer curl vs dumbbell curl comparison to learn more about how different grips affect muscle activation and growth.

So since neither reverse curls nor hammer curls work the biceps in full forearm supination, neither exercise is optimal for bicep development.

That said, hammer curls are still more effective than reverse curls for building the biceps because they have you curl with more supinated wrists.

Also, since hammer curls naturally enable you to lift far heavier weights than reverse curls, they're a lot better at overloading the target muscles, of which the biceps, in addition to the brachialis and brachioradialis, is a prime mover.

As a result, hammer curls are better than reverse curls for bicep growth (not just activation) because, all else being equal, higher levels of muscle tension lead to greater hypertrophy than lower levels. In other words, progressive overload is a critical component of muscle growth. [1]

However, muscle activation levels between the biceps and brachioradialis are a function of the mechanical advantage that one muscle has over the other.

In other words, by putting your biceps at a mechanical disadvantage, which is to say, by curling with a neutral or palms-down grip, you naturally reduce its force output potential, which means that your brachioradialis is forced to pick up the slack.

Based on this line of reasoning, the reverse curl is better than the hammer curl for building the brachioradialis. Doing drag curls with a reverse grip, in particular, produces a very intense peak contraction.

The brachialis is a pure elbow flexor. So it's highly active regardless of your grip. Again, you can increase its activation and make it work even harder by putting your biceps at a mechanical disadvantage.

We know that hammer curls enable you to lift more weight than reverse curls. So in this sense, hammer curls could be better for building the brachialis because they overload it with more resistance, which is extremely important for hypertrophy.

However, the brachialis is a slow-twitch dominant muscle. So since people generally perform reverse curls for higher reps than hammer curls, the former could actually be better despite the fact that you're lifting lighter weights.

One thing's for sure: The brachialis responds excellently to slow tempos. So regardless of which curl you choose, try to perform 3-5 second negatives to really make this fatigue-resistant muscle work.

In practical terms, you could do hammer curls for sets of 6-8 reps to focus on the fast-twitch muscle fibers (after all, the brachialis still has plenty of those). Then you could end the workout with high-rep reverse curls to recruit the remaining slow-twitch fibers. This approach gives you the best of both worlds.

Strength means different things to different people. But one thing that we do know is that strength is both a skill that you develop through repeated practice and something that's also a function of muscle size.

In terms of increasing your overall arm strength, hammer curls are the superior choice because they allow you to lift more weight. So in that sense, if I could only do one exercise, it would definitely be hammer curls rather than something like a reverse plate curl.

Hammer curls are also better at developing bicep strength because they work the biceps to a greater degree than reverse curls.

As for the brachioradialis, you could argue that hammer curls are once again superior because they overload it with more resistance. But you could also make a strong case for reverse curls being the better choice because they put your biceps at a more significant mechanical disadvantage, thus reducing their ability to contribute to the exercise even more.

The verdict: Which is best overall?

As you hopefully learned during our hammer curls vs reverse curls showdown, there is no universal best exercise for everyone; it depends on your goals and preferences.

If you want a good combination of biceps, brachioradialis, and brachialis development, then hammer curls are your best bet because of their neutral grip, which distributes the resistance more evenly than reverse curls.

If you want to take your biceps out of the equation as much as possible, then you should choose reverse curls. The exercise works your forearm extensors much more than hammer curls and may also result in better brachialis and brachioradialis stimulation due to the fact that your biceps are at a significant mechanical disadvantage when your palms are facing down.

For best result, you may want to consider performing both exercises, since, as we discussed in detail, both have their pros and cons. It's recommended to do low-rep hammer curls with an explosive lifting motion to work the fast-twitch muscle fibers. Then, perform reverse curls for higher reps and with a slower tempo to better recruit the slow-twitch fibers and, specifically, the brachialis muscle.