This is the brachioradialis-builder that no one's doing. 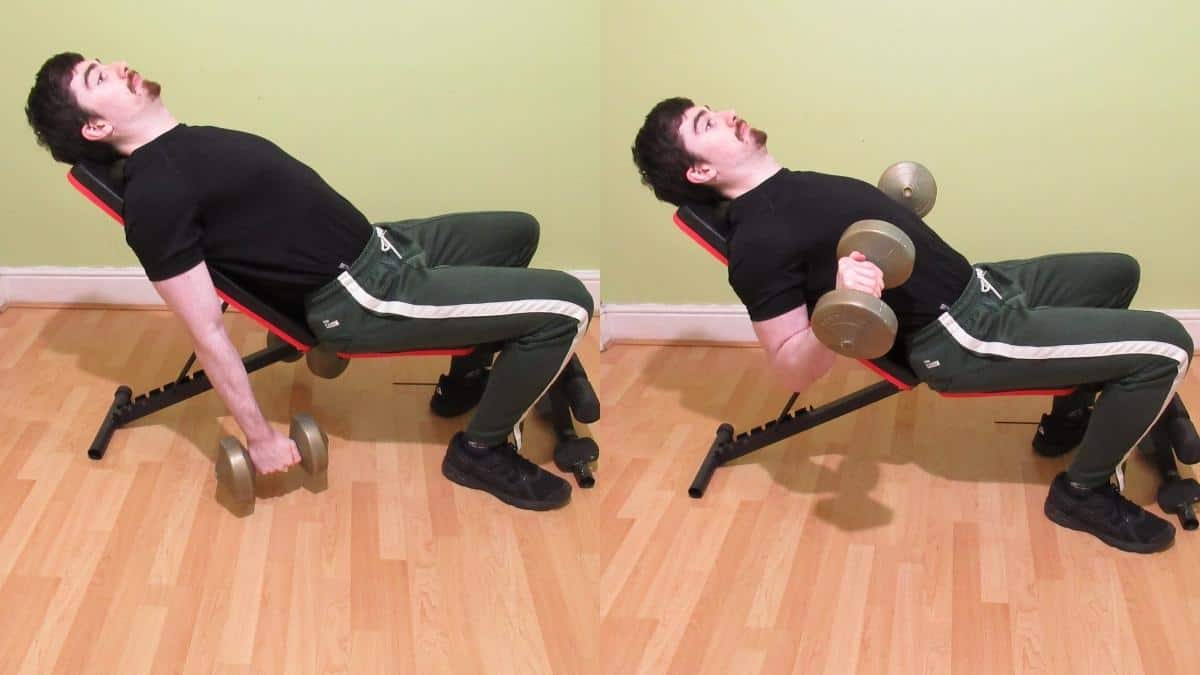 How to do incline reverse curls

You can also perform overhand spider curls by using the bench in the reverse position, which is to say, by pressing your torso against the backrest and letting your arms hang forward.

Reverse dumbbell incline curls aren't as popular as the alternate incline dumbbell curl because most lifters like to train their biceps as much as they can. However, by prioritizing this pronated grip exercise, you'll be well on your way to sculpting arms that are not only big but proportional too.

Great for the brachioradialis

The brachioradialis is a large lower arm muscle that contributes the most mass toward the thumb-side of your forearm. It's a powerful elbow flexor that becomes more active when you curl with your palms in a pronated position.

This is because when you use an overhand (pronated) grip, you're automatically putting your biceps in a position of mechanical disadvantage, which in turn reduces their ability to produce force. As a result, your brachioradialis has to take over the reins and perform most of the heavy lifting. [1]

The end result is more symmetric arms, presuming, of course, that your brachioradialis is actually lagging behind your biceps, which is the case for the vast majority of lifters.

Since the brachioradialis is a fast-twitch dominant muscle, you'll get the best results from performing low reps (6-8) with an explosive lifting tempo.

Brilliant for the brachialis

The brachialis is, at best, an afterthought for the average gym-goer. But, by developing your brachialis to its full potential, you can make your upper body stand out from the crowd of bicep-dominant physiques.

It's a similar muscle to the brachioradialis in that it becomes more active when your biceps are placed at a mechanical disadvantage, which is to say, when you curl with a reverse grip.

The catch is that the brachialis is also the opposite of the brachioradialis in terms of muscle fiber composition. To be clear, the brachialis still contains a considerable amount of fast-twitch muscle fibers, which will grow larger from heavy reverse incline curls.

However, it's primarily a slow twitch muscle. This means that it grows best from high repetitions, slow rep tempos, and a generous amount of training volume. [2] In other words, it's a real workhorse that's hard to fatigue.

In practice, your best bet is to perform the incline dumbbell reverse curl heavy for the first few sets to focus on the fast-twitch muscle fibers. Then, on the final few sets, lighten the weight, do a few more reps set, but really slow down the negatives to make your brachialis resist the tension.

The single arm reverse grip bicep curl is an excellent exercise for building proportional arms because by training each limb independently, you reduce the chance of developing muscle imbalances.

The issue is that standing exercises like these leave more room for error when it comes to the technique. Specifically, it can be tempting to use your legs, back, and hips to swing the weights up in a bid to lift heavier dumbbells.

This type of lifting form is suboptimal because it forces your joints and connective tissues to handle more resistance than they can cope with on their own. Plus, it doesn't lead to any extra stimulation of the target muscles because the other body parts that you're using to cheat the weights up are receiving the majority of the extra resistance.

However, with the reverse incline dumbbell curl, this is never a problem because your back is braced against the bench, and your feet are planted firmly on the floor. As such, you can't swing the weights up as effectively, which in turn means that your brachialis and brachioradialis have to perform more work.

Conclusion: Is the reverse incline curl worth your while?

The incline reverse curl is a worthwhile exercise for anyone who has decent bicep development but comparatively weaker brachioradialis and brachialis muscles. Essentially, if you want to build arm muscles that are in proportion to one another, then the reverse incline curl will help you get those symmetry gains.

Just make sure to use the strictest possible form.

While a small amount of shoulder flexion is often permitted in the incline inner bicep curl (because the biceps is a shoulder flexor after all), you should keep your elbow completely still as you lift the weight during incline reverse curls. This is because you want to take the biceps out of the movement as much as possible so that your brachialis and brachioradialis can enjoy the majority of the tension.