How to do reverse concentration curls

Isolate your brachialis and brachioradialis with overhand concentration curls. 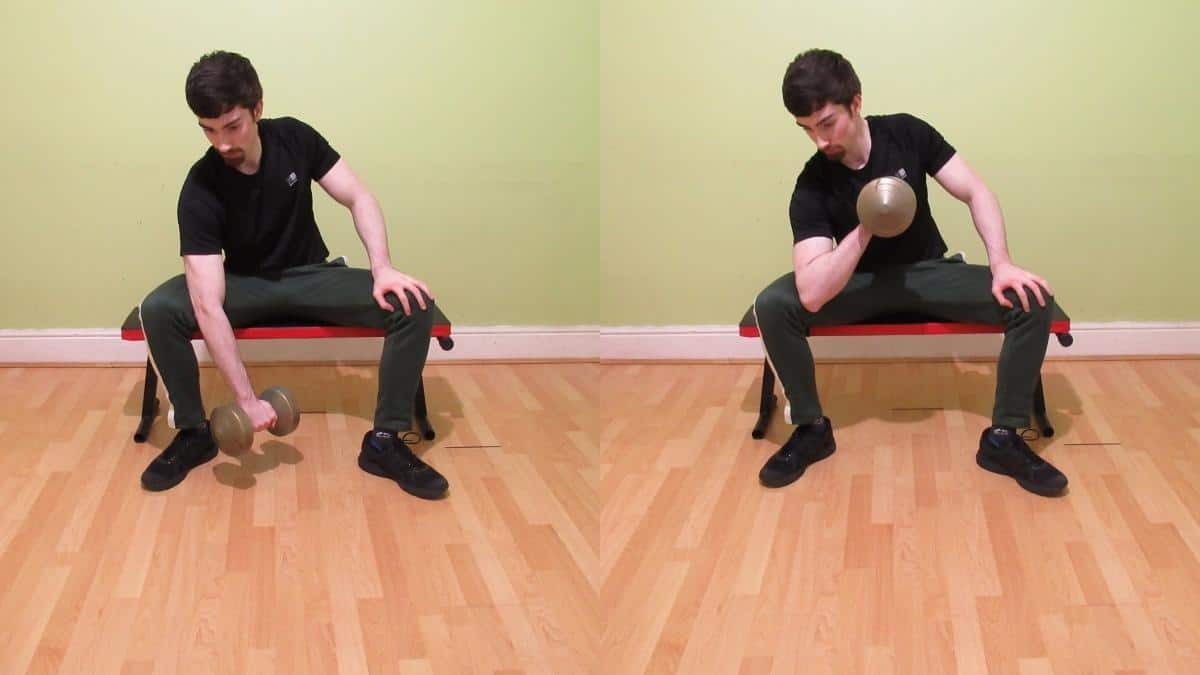 Unlike the regular concentration bicep curl, the reverse grip concentration curl trains the brachialis and brachioradialis in addition to the biceps brachii muscle. This makes it an excellent exercise for building symmetrical arms because way too many lifters overemphasize their biceps these days.

How to do a reverse grip concentration curl

The brachialis muscle becomes more active when you curl with an overhand grip because such a grip places the biceps at a mechanical disadvantage. This means that your biceps can't produce as much force, and so your brachialis has to pick up the slack and perform the majority of the lifting.

What this means for you is that you'll develop fuller-looking biceps because the brachialis pushes the biceps out when it's well developed, which in turn makes your arms look broader and more imposing.

Since the brachialis is composed of predominantly type I muscle fibers, it responds best to slow and controlled reps. So try and lower the weight over a five-second duration to really tire this muscle out because it's incredibly resistant to fatigue.

This movement is very similar to the one arm reverse curl. The only difference is that you're doing the concentration version sitting down, which may help you to focus more on working the target areas.

Like the brachialis, the brachioradialis becomes more active when you lift with a pronated grip. It's highly involved in exercises like pronated grip incline curls that use an overhand grip, but concentration curls are arguably the best of all because they provide better muscle isolation.

This is because it's much harder to cheat when your arm is braced against your leg. Therefore, the vast majority of the tension stays on the target muscles, and so you naturally get a more substantial muscle growth stimulus for your brachioradialis.

Because the brachioradialis is mostly fast-twitch in its muscle fiber composition, you want to lift heavy weights with explosive rep tempos to target it optimally. This is in contrast to the brachialis, which, as we just established, responds best to higher reps and slow negatives.

The way around this contradiction is to simply start heavy and then decrease the resistance and bump up the reps as your sets progress. This way, you'll target the widest variety of muscle fibers (after all, the brachioradialis still has some slow-twitch muscle fibers) and thus trigger the most amount of muscle growth.

You can also give the reverse grip spider curl a go in your next workout if you have a weight bench.

The concentration reverse curl encourages you to use good form by necessitating that you brace your elbow against the inside of your thigh during the exercise.

Well, not only does this setup improve your lifting technique, it also enhances your mind-muscle connection and gives you pumped up biceps and brachialis muscles. This is because you don't need to put as much effort into stabilizing the weight, which in turn means that you can channel all of your energy and focus into blasting your biceps, brachialis, and brachioradialis.

You can also do the resistance band concentration curl if you don't have access to free weights but still want to pump up your arms.

Reverse concentration curls are a valuable exercise for building arms that are not only big but proportional too. By emphasizing the brachialis and brachioradialis, the reverse grip concentration curl work the two arms muscles that are lagging for most lifters.

This naturally improves the aesthetics of your physique and the symmetry of your upper body because you won't have overly dominant biceps if you perform the reverse concentration curl on a regular basis.

Of course, this exercise won't reduce your bicep development. Rather, it will simply help your surrounding muscles to catch up to them in terms of size.