Here are 3 pros and cons of doing kettlebell spider curls. 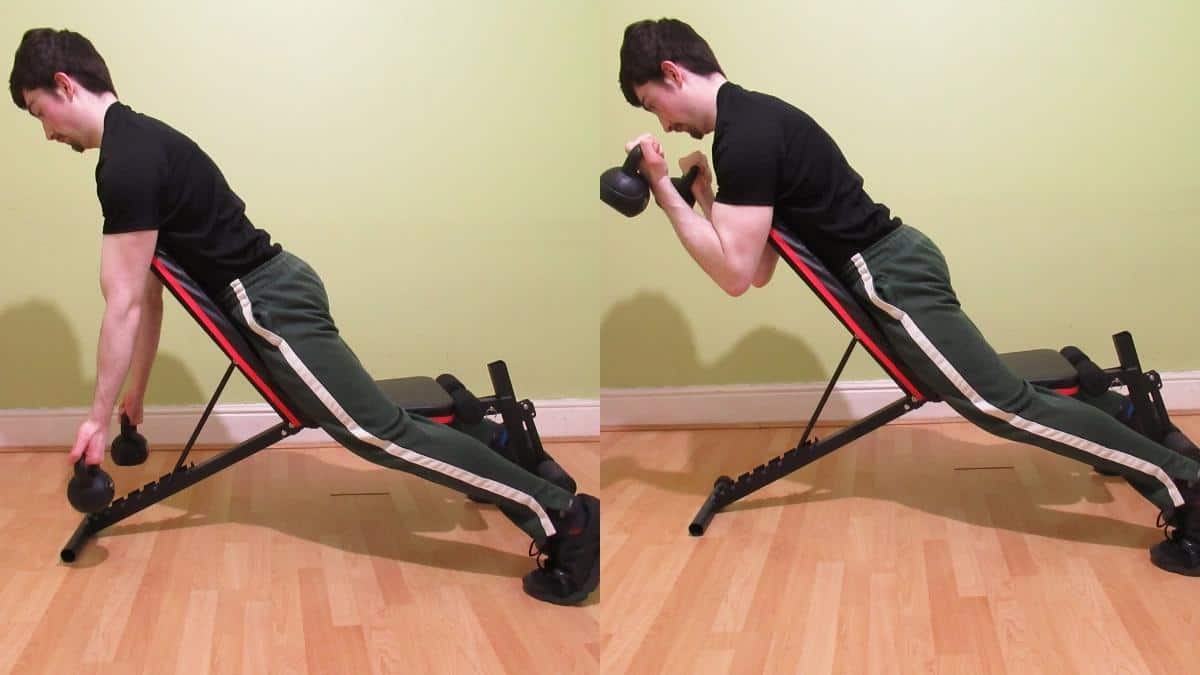 Kettlebell spider curls are a unique exercise that can improve the size and shape of the biceps muscle. While the setup time for this movement is longer than that of regular kettlebell curls, the spider version is better for isolating your biceps because you can't cheat the weights up as effectively when your body is stabilized on the bench.

The DB spider curl is more convenient than its kettlebell counterpart because not all gyms have kettlebell sets that ascend in manageable increments. As such, it can be hard to gain strength efficiently when you make kettlebells your training tool of choice.

The benefit, however, is that kettlebells are typically a bit easier to grip than dumbbells. This means that you'll naturally take some of the tension off your forearms and place it on your biceps instead by using kettlebells.

How to do kettlebell spider curls

Kettlebell spider curls are one of the all-time great kettlebell bicep exercises because they really isolate the target muscle by stabilizing your upper body on the bench. However, there's one major downside that you need to take into consideration before deciding whether or not this movement is actually feasible.

Since the spider kettlebell curl necessitates that you stabilize your upper body on a weight bench and plant your feet on the floor, it naturally lends itself to bicep isolation. This is because you can't swing the weights up—at least not without considerable effort—when your torso and legs are in a fixed position. As such, your biceps get to enjoy the vast majority of the resistance.

Note, however, that's it's perfectly okay to allow your shoulders to come forward slightly as you flex your biceps. This will actually intensify the contraction because the biceps biomechanically assist the deltoids with shoulder flexion.

Progressive overload, which is to say increasing the resistance over time, is vital for gaining strength and muscle mass. The issue is that not all fitness facilities have kettlebells that ascend in manageable increments. Therefore, it can be hard to make progress on exercises that work relatively weak muscle groups, such as the biceps.

The solution is to make spider kettlebell curls a finishing exercise. This way, you can just lift a light weight and train to muscular failure (or close to it) in order to recruit the remaining muscle fibers.

Spider cable curls, on the other hand, are a much better primary exercise because cable machines typically increase in very manageable increments. And even if your particular unit doesn't, you can always use microplates to make the weight jumps more accessible.

Movements such as the resistance band spider curl are undeniably effective for building the biceps. However, they're not exactly convenient to set up because you have to get your body in the correct position and then reach down for the weights, which can be surprisingly challenging if you aren't blessed with long arms.

But as you know, kettlebells are much taller than other types of free weights. This makes them much easier to grab when your body is braced against the bench in the spider curl position, which in turn means that you don't need to waste any needless energy getting the weights into your hands.

The spider kettlebell curl is a versatile arm exercise that enables you to emphasize different muscles by changing your grip. Below you'll find guidance on how to do just that, as well as the pros and cons of each version.

The reverse kettlebell spider curl emphasizes the brachialis and brachioradialis muscles over the biceps brachii because using an overhand grip places your biceps in a position of mechanical disadvantage.

This means that your biceps can't produce as much force because they're not in their optimal supinated position. As a result, your brachialis and brachioradialis have to pick up the slack and do the majority of the lifting.

You'll need to lift less weight on this variation because, as mentioned, the biceps aren't as active, but if you have a lagging brachialis or brachioradialis (in comparison to your biceps), then this exercise will help you to build more proportional arms.

Alternating kettlebell spider curls are very similar to the regular version. The only difference is that as one of your biceps contracts, the other one relaxes. This may actually help you to lift slightly heavier weights and/or perform more reps because your biceps are getting a short rest as the other one lifts its weight.

Of course, you can combine this exercise with the reverse variation by performing it with a pronated grip if you want to prioritize the development of your brachialis and brachioradialis.

You could also do the underrated kettlebell bicep hammer curl to work your arms from a different angle.

If you want to ensure that each of your biceps receives equal work, the one arm kettlebell spider curl is the exercise for you. By training each arm individually, you can make sure that you don't develop any muscular imbalances or worsen the existing ones that you may already have.

The verdict on kettlebell spider curls

Like the even more popular preacher kettlebell curls movement, kettlebell spider curls are fantastic for isolating your biceps. This is because kettlebells are very easy to hold onto, which means that your forearms don't have to do as much work. Ultimately, your biceps will enjoy more of the tension because you don't have to grip the kettlebell so tightly.

Spider kettlebell curls are definitely more suited to high reps because it can be hard to increase the resistance on a regular basis if your gym doesn't have an extensive kettlebell set. Perform 10-15 reps on each set and focus on stretching and squeezing your biceps so that they get plenty of muscle-building tension.