Learn why kettlebells are king when it comes to building a bigger brachialis. 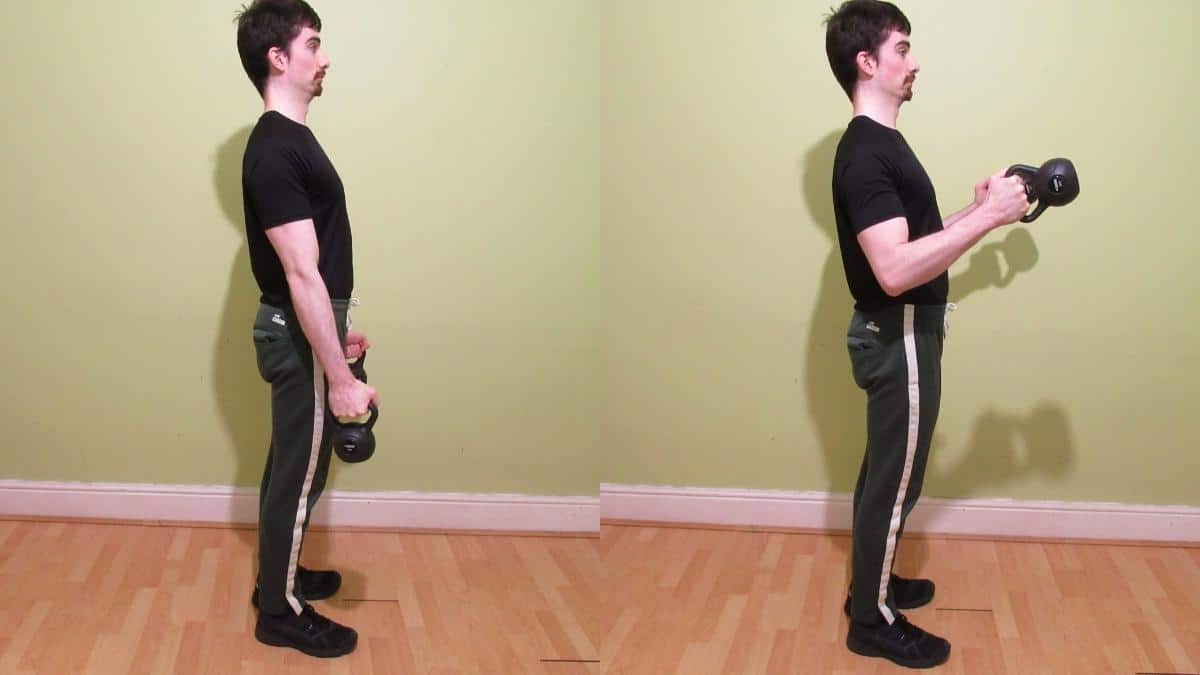 The kettlebell hammer curl is an underrated exercise for working the bicep anatomy, brachialis, and the surrounding forearm muscles. This is because the drill relies on the radial deviation strength of your forearms in order to keep your wrists straight.

So compared to dumbbell hammer curls, you're getting more bang for your buck with this exercise because the kettlebell version works a broader range of muscles. The downside is that you'll need to use significantly less weight than you would on regular hammer curls and kettlebell curls. Therefore, it's recommended to perform kettlebell hammer curls at the end of your workout for high repetitions rather than as your primary bicep or brachialis exercise.

How to perform kettlebell hammer curls

Hammer kettlebell curls are seldom performed by bodybuilders and powerlifters because the movement isn't very conducive to lifting heavy weights. This is mainly because the exercise also works your forearms via radial deviation, [1] which is a lower arm function that most lifters erroneously neglect and are thus weak at training.

The kettlebell bicep hammer curl works your forearms in two ways; it trains your brachioradialis via elbow flexion, and it works your wrist extensors via radial deviation.

Concentration hammer curls, in and out hammer curls, and every other variation of hammer curl works the brachioradialis. Yet, the kettlebell version is the only variant that trains the wrist extensors, which are the muscles that reside on the top of your forearm.

Of course, you could just perform radial deviations separately to strengthen this commonly neglected forearm function. However, why do in two exercises what you can accomplish with one?

The kettlebell hammer curl creates a distinct pump and burn in the forearms because it's one of the few exercises that train two forearm functions simultaneously.

And all of this is in addition to the bicep and brachialis stimulation that we'll discuss next.

Hammer kettlebell curls and low-rep training do not go together. This is because you're relying on your wrist strength, which, no matter how developed, will never be able to keep up with the power of your fast-twitch bicep muscles.

As such, you need to perform the kettlebell hammer curl for high reps during your kettlebell bicep workout if you want to enjoy its best effects.

Although being confined to lifting light weights on this exercise might seem like more of a curse than a blessing, it actually isn't. This is so because the brachialis is actually a slow-twitch dominant muscle. Therefore, it responds best to high reps, higher training volume, and slower tempos. [2]

Considering that the brachialis is often neglected in favor of more obvious mirror muscles, and knowing that it can visually push your biceps out and make them look thicker, any exercise that trains it optimally is worth your time and effort if you're in pursuit of aesthetic arms.

It's recommended to perform the kettlebell hammer curl for sets of 12-20 reps after your main bicep exercises. This way, your arms will already be fatigued to the point where you can get excellent muscle stimulation from relatively light weights, like you can with spider kettlebell curls.

Movements such as the hammer spider curl can undoubtedly turn a puny pair of arms into sculpted biceps with enough effort and consistency. However, exercises like this one and the machine hammer curl require extra equipment and more setup time. This ultimately means that your workouts will take longer and feel more burdensome.

The kettlebell bicep hammer curl, on the other hand, has only two requirements; a pair of kettlebells and a spare five minutes. So if you train at home or simply want to keep your workouts short, intense, and enjoyable, then choosing exercises that you can do with basic equipment is a bright idea.

The standard kettlebell hammer curl is, in our opinion, the most effective variation (for all the reasons specified above)—hence why we made it the subject of this article. That said, there are certainly pros and cons of doing these other two variants from muscle growth and convenience perspectives.

The single-arm kettlebell hammer curl is exactly the same as the regular version; the only difference is that you're curling one arm at a time. As such, you may find it easier to maintain the correct lifting form because you don't have to split your focus and exertion between two arms.

The downside—and this is only if you have very strong arms—is that you might feel off-balance if you're lifting an especially heavy kettlebell. But if you're performing the movement toward the end of your session when your arms are already fatigued, then it's doubtful that you need to worry about the problem. The weight will naturally be light enough to where you can maintain your balance without issue.

If you only have access to one kettlebell, then this is the exercise for you. Rather than gripping the top of the handle like in the standard version, you'll be holding the sides of the handle with both of your hands.

You'll need a pretty heavy kettlebell to make this movement effective. But as long as you have access to the necessary weights, then this exercise can build as much mass as any other type of hammer curl.

Conclusion: How good is the kettlebell hammer curl for building bicep muscle?

Hammer kettlebell curls are an often overlooked exercise because they're not performed with traditional bodybuilding equipment. And while it's true that regular hammer curls are likely more effective for beefing the biceps and brachialis—because you can lift more weight and because these two muscles are fast-twitch—kettlebell hammer curls are actually better for building the brachialis.

Developing your brachialis will make your biceps look broader and more peaked. This will give your physique an edge over those of your competition, many of whom likely just rely on basic bicep curls.

Moreover, the kettlebell hammer curl trains the wrist extensor muscles by challenging your radial deviation strength. So not only will you build larger biceps with this exercise, but you'll also build better-looking forearms too.