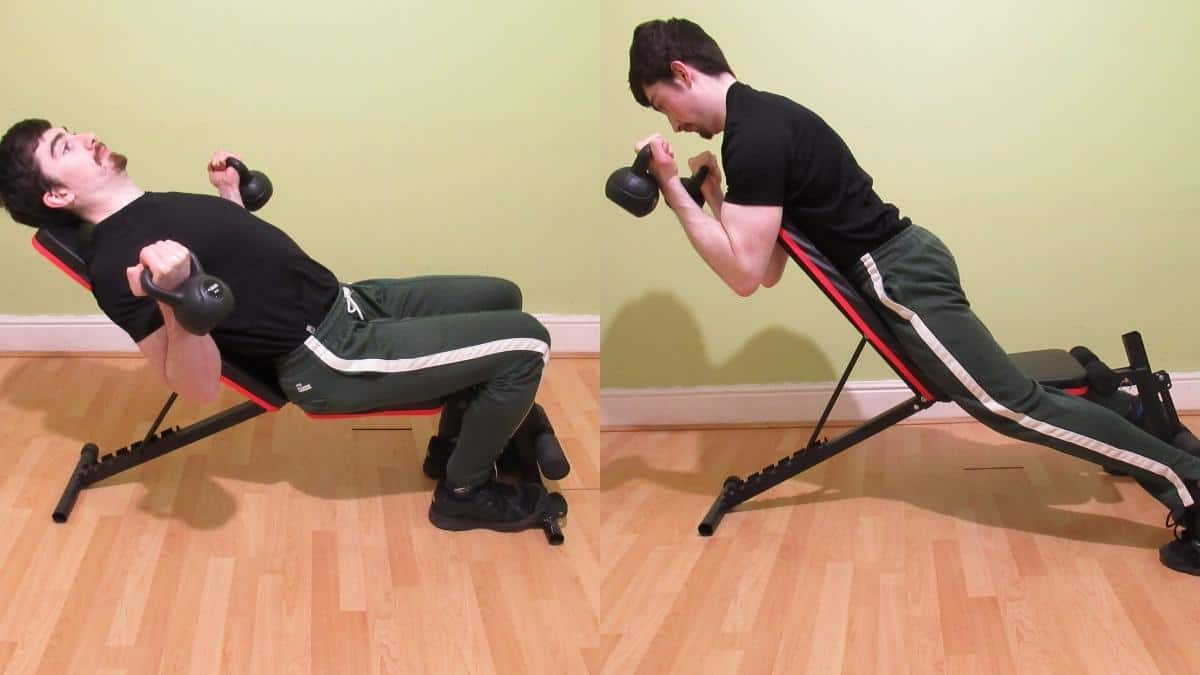 In addition to forearm supination, the primary biceps brachii function is elbow flexion, which is to say moving your forearms toward your biceps. Kettlebell bicep exercises are particularly effective in this regard because they train both of these main functions simultaneously.

Kettlebell bicep curls are a simple yet effective muscle-building exercise that you can perform virtually anywhere. All you need is a kettlebell—or two—and a small amount of workout space.

This movement is especially effective for building mass because it enables you to lift heavier weights than the other exercises due to its focus on the biceps as a whole.

Perform it standing to engage more of your core muscles, or try the seated version (the form is the same for both) to better isolate your biceps.

The hammer kettlebell bicep curl is a great training drill to do if you want to build your biceps and forearms simultaneously. This is because your forearms have to perform isometric radial deviation in order to keep your wrists straight during this exercise.

The downside is that you'll have to lighten the weight because there's no way that your radial deviation strength will be able to keep up with that of your biceps.

Still, considering that most lifters neglect this lower arm function (the forearms move from side to side as well as up and down), you'll build a more complete upper body by incorporating this move into your kettlebell bicep workout.

The incline kettlebell curl emphasizes the long head of your biceps because curling with your arms behind your body shifts the emphasis onto the outer muscle fibers of the biceps.

This can help you to develop a better bicep peak.

But the movement is also generally one of the best kettlebell bicep exercises because it provides much more consistent resistance than something like a spider kettlebell curl, which only becomes challenging when your biceps are maximally contracted.

Preacher kettlebell curls are an ideal KB bicep exercise if you often struggle to maintain the proper lifting form during similar movements (i.e., if you have a tendency to cheat the weight up with momentum).

This is because you can't effectively swing the weights up with your legs, hips, back, or shoulders when all of these body parts are stabilized by the preacher curl station. As such, your biceps naturally have to handle most of the heavy lifting, which also means that they get to enjoy more of the tension.

Ultimately, your biceps will grow larger because they have to do more work.

Concentration kettlebell curls are convenient and highly effective. All you need is one kettlebell and a comfortable place to sit. For this reason, it's definitely worth including in your kettlebell bicep workouts if you train at home.

You can do this drill in a standing position, where you essentially bend over to a 90-degree angle, let your arm hang, and then curl the kettlebell. This version is ideal if you don't have a weight bench or a comfortable sitting position (like a chair or sofa).

This tutorial, however, covers the seated version because most people will be able to evoke a better mind-muscle connection when they're sat down because their core will be more stabilized.

If you want to enhance your overall arm aesthetics by developing your brachialis and brachioradialis muscles in addition to your biceps, then the kettlebell reverse curl is one of the best exercises for the job.

Since this movement places your biceps in a position of mechanical disadvantage where they can't supply much force, you'll have to lift lighter than on other kettlebell biceps exercises. However, the benefit of more proportional arms (most lifters have lagging brachialis and brachioradialis muscles) is definitely worth the trade-off of lifting less resistance if you're a bodybuilding enthusiast.

You can also give kettlebell Zottman curls if you want to do an exercise that builds your biceps and forearms simultaneously.

The kettlebell crush curl essentially mimics a hammer curl. The difference is that the crush curl relies on your grip strength to a greater degree, especially if you're gripping large-diameter kettlebells.

Below you'll find two bicep kettlebell workouts that each help you to achieve similar yet slightly different goals. The first workout prioritizes muscle growth (hypertrophy), while the other workout emphasizes strength gain, with hypertrophy as a secondary focus.

If you just want to beef up your biceps as effectively as possible, then this is the kettlebell bicep workout for you. We start heavy with a proven mass-building exercise to add size to the biceps. Then, after 3-5 sets, we switch gears and focus on the brachioradialis and brachialis, which are two muscles that most lifters neglect and which can really improve the appearance of your arms.

Then we move onto a unilateral exercise to really focus on each bicep to make sure that it gets the attention it deserves. Finally, we challenge our biceps and forearms simultaneously by performing high rep hammer curls.

Follow this biceps kettlebell workout if you want to develop freakishly strong biceps. We begin with standard curls to focus on overall mass and strength. Then we tax our biceps and forearms together by tackling the tough kettlebell variation of the Zottman curl for a minimum of 4 sets.

As the workout progresses, we hit it hard with hammer curls to focus on that all-important radial deviation strength. And then, finally, we unleash our inner bodybuilder and pump up our arms with a few sets of high reps crush curls to focus on the slow-twitch muscle fibers.

Conclusion: Are kettlebells good for building the biceps?

Kettlebell bicep exercises are excellent for building muscle mass and developing strength. They're especially useful if you enjoy functional training and want to work out with kettlebells as frequently as possible so that you can get used to gripping them.

The only slight downside is that, depending on your gym, you might not always have access to kettlebells that ascend in manageable increments. This can make it hard to gain strength because the weight jumps may simply be too large for a small muscle group like the biceps.

You can follow one of our routines, or, for more customization, you can create your own kettlebell bicep workout from the list of exercises that we provided.