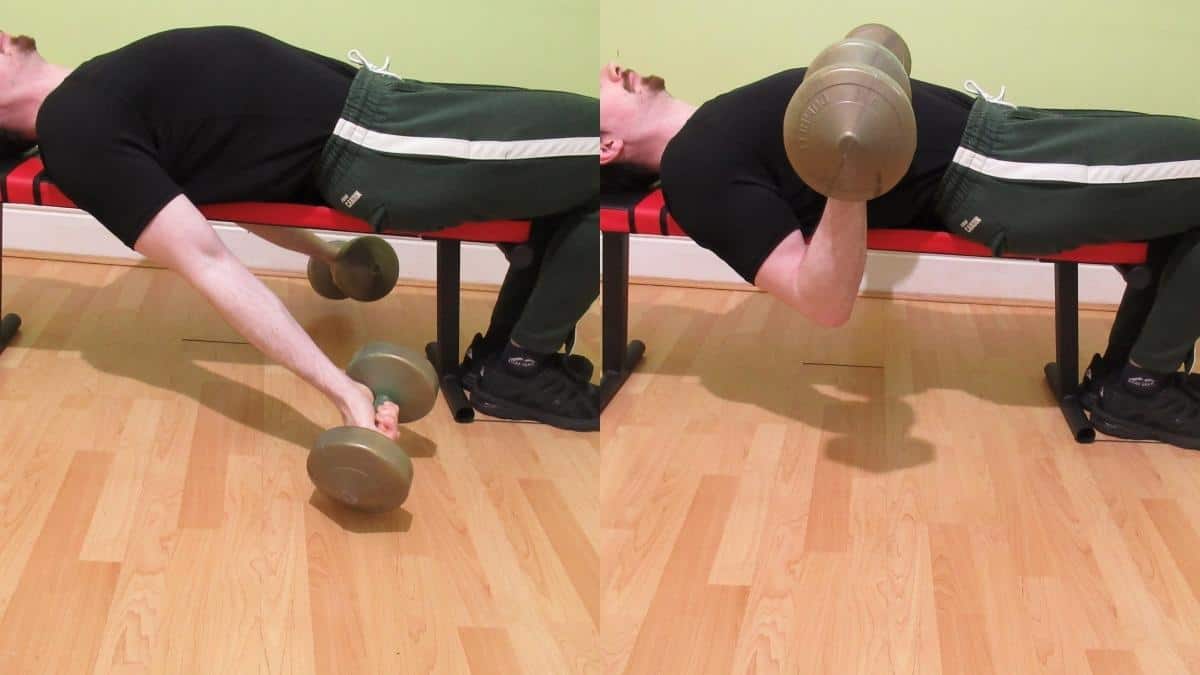 The lying dumbbell curl is a rarely performed but nonetheless useful exercise for building the bicep brachii. Unlike other movements, the supine bicep curl produces an extremely intense bicep stretch that can help to trigger new muscle growth. However, unlike the tried and tested DB bicep curl, this exercise isn't great for getting a pump because it doesn't create much of a contraction.

How to do lying dumbbell curls

Lying curls are a mixed bag. On the one hand, they provide a muscle stretch of such alarming intensity that it feels like your biceps are going to rip off the bone. But on the other hand, they offer, at best, a mediocre muscle contraction.

One thing's for sure: Lying curls make for a very unusual bicep workout.

As anyone who's ever tried lying bicep curls can attest to, your muscles will feel like they're about to tear off the bone when you do this exercise; they provide an exceptional isometric bicep workout.

Now, providing that you're sensible and use a relatively light weight, your biceps won't actually get ripped off the bone. [1]

However, the stretch is so intense that you need to mentally prepare yourself beforehand.

Since the eccentric part of the rep is responsible for a large majority of muscle growth, supine curls are an excellent exercise because they provide a greater eccentric stretch than virtually any other movement. So if your biceps have hit a plateau, then you might be able to eke out some new growth by performing the lying DB curl.

Just make sure to lower the weights slowly so that you can take full advantage of this muscle stretch. As you'll soon learn for yourself, the supine biceps curl becomes a lot harder as you close in on elbow lockout, so if you don't control the dumbbell, then you might overstretch your muscle.

Lying dumbbell curls may well be unique, but they're not exactly complicated, either.

All you need to do is lie down on a bench and then perform a bicep curl. So in that respect, it's actually easier than regular curls because you don't need to stabilize your core—the bench does it for you.

All you need to do is flex and extend your elbow joint. Or, to say it another way, keep your elbows still while you repeatedly move your forearms toward and then away from your biceps.

You can also do hammer curls lying down if you want to focus on your brachialis and brachioradialis muscles as well as your biceps. You'll be able to lift slightly more weight on this variation, but you won't get the pure bicep isolation of supinated-grip lying curls.

We have over 150 exercise tutorials just for the biceps. And let me tell you, out of the countless different drills and their variations, the lying bicep curl provides the worst muscle contraction of the lot.

There's virtually no tension at the top of the rep—hence why I didn't ask you to hold the contraction this time.

However, just because lying dumbbell curls provide a lackluster bicep contraction doesn't mean they're a bad exercise. You can use lying curls for the stretch (and as a lower bicep exercise) and get the contraction elsewhere.

In other words, no single exercise is going to provide a skin-splitting stretch and a maximal muscle contraction. That's why bodybuilders do multiple movements for their biceps. [2] As long as you're doing an exercise that provides a good stretch and a movement that creates a strong contraction, you're ticking all the boxes.

Con: May hurt your elbows

The lying bicep curl is extremely challenging during the eccentric phase of the rep. As such, your elbow joints and the surrounding connective tissue are going to be under a lot of stress even if you use the perfect form.

So to minimize the chance of getting tendonitis, make sure to lower the dumbbell very slowly. A 3-5 second negative is ideal here because it'll put less force on your elbow than if you rushed through your reps. Plus, it'll make your biceps work a lot harder too.

As an alternative, you could try the lying bicep cable curl since cables typically provide more joint-friendly resistance than free weights. But that exercise focuses on the contraction rather than the stretch.

Should you do the supine bicep curl?

The lying dumbbell curl is a little-known bicep drill that can produce some big gains if you use the correct form. Since most lifters won't be used to feeling such a strong stretch in their biceps, lying curls are particularly effective for breaking through plateaus and stimulating new muscle growth.

On the other hand, due to the stress that the lying bicep curl places on the elbow joint, it's also a movement that beginners should avoid. While the exercise isn't necessarily dangerous if you use strict form, novice lifters may not yet have developed the mind-muscle connection necessary to lower the weight slowly with their biceps.