How to do lying hammer curls: Technique, benefits, variations

Learn how doing hammer curls in a lying position could open the door to new muscle growth. 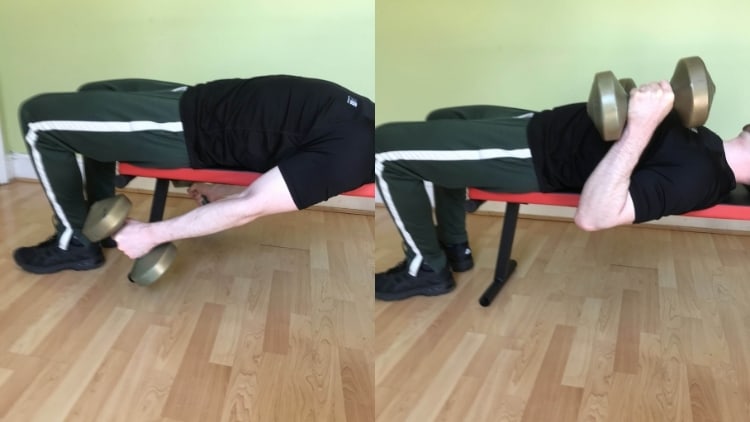 The bicep muscle grows best when you train it from multiple angles because by doing so, you naturally recruit a wider range of muscle fibers, which will all grow stronger and thicker if you consume an appropriate diet in addition to your training.

The standing dumbbell hammer curl trains your biceps and brachioradialis at the midpoint of the range, which is to say when your upper arms and forearms create a 90-degree angle at your elbow joint.

Other exercises work your arms when they're fully contracted, which is referred to as the shortened part of the range of motion.

But besides lying dumbbell curls, few movements work your biceps and brachioradialis when they're fully lengthened.

This little-known exercise makes your biceps and brachioradialis work overtime by stabilizing the dumbbells when their muscle fibers are in a maximally stretched position.

How to perform lying hammer curls

The lying hammer curl is an underground bodybuilding exercise that few lifters perform because most people have no idea that it even exists. It's a tough variation of the traditional hammer curl that will add mass to both your upper and lower arms. Just be sure to keep the cons in mind as well so that you know what to expect when you give it a go on your next arm day.

No other type of hammer curl stretches your bicep and brachioradialis like the lying hammer curl. This is great for gaining size because the heavy weighted stretch results in muscle damage, which encourages the muscle fibers to grow thicker and stronger. [1]

However, since the stretch is so intense, it's critical that you control every part of the repetition so that you don't overexert your muscles. As your elbow reaches full lockout, you really want to slow down your rep because that's where you'll feel most of the tension.

Also, don't be shy to pause in the stretched position for a second or two. After all, the lockout is the hardest part of the exercise, so you might as well develop strength in that position by maintaining the stretch for a few seconds.

Exercises like the one arm hammer curl require minimal equipment. Therefore, they're very easy to perform if you train at home and don't have the budget for fancy fitness gear. And it's not like a weight bench is a particularly extravagant purchase. However, if you don't have access to a gym, then you'll need an appropriate weight bench of your own.

Crucially, you'll need a bench that enables you to hang your hands off the sides without the dumbbells touching the floor. This way, you'll be able to achieve a full range of motion and thus make the exercise worthwhile.

The lying cable bicep curl also requires a bench, but it works your biceps in a highly contracted (rather than fully lengthened) muscle position.

Due to the intensity of the stretch provided by lying hammer curls, you'll need to lift relatively light weights in order to maintain the correct technique (i.e., no half reps).

But if you want to kick the exercise intensity up a gear, then you can move straight into regular hammer curls once you reach failure on the lying variation. This technique will increase your muscle pump and provide your biceps with more growth-stimulating time under tension.

On the other hand, if you'd prefer to stay lying on the bench, you can pair the lying hammer curl with a tricep extension of your choice. This variation will still give you a great pump, but the benefits will be distributed over the entirety of your arms—not just your brachioradialis and biceps.

As mentioned, hardly anyone does lying hammer curls, especially in more modern health clubs. Most people simply don't realize that the movement exists, but others avoid it because they think that the exercise looks strange.

And to a certain extent, it does.

But I can bet you that once upon a time, people thought that the bench press was weird. But now it's virtually the most common exercise in the gym.

So ultimately, don't let the gazes of your fellow gym-goers put you off doing this exercise. After all, someone has to be the trendsetter. Plus, in all likelihood, their stares are probably just out of curiosity. So in that sense, the movement may actually be a great conversation starter with potential gym buddies, too.

There are three different types of lying hammer curls. The best variation for you depends on your goals and equipment availability, which we'll discuss in the following section.

The lying rope hammer curl provides your arms with constant tension. Opposite to the dumbbell version, this exercise is the hardest when your biceps are maximally contracted. So for optimal results, you may want to include both versions in your routine.

The downside is that you need access to a gym (or your own cable machine) to perform it. Yet, if you can't get to the gym or don't have the money to blow on a cable system, then I have just the exercise for you.

You can also click the link to learn about the other types of cable rope bicep curl that you can do to build your arms.

With a resistance band set and a door anchor, you can mimic the above exercise with bands. To perform it, you simply connect the anchor to your door, hold the handles with a neutral grip, and then lie down on the floor. From there, curl the handles toward your shoulders and squeeze your biceps. Finish the rep by releasing the contraction under control until your elbows are almost locked out.

Are lying hammer curls worth performing for bicep development?

Lying hammer curls offer a unique muscle growth stimulus by working your brachialis, brachioradialis, and biceps in their lengthened muscle positions. This creates high amounts of muscle damage due to the mechanical tension inflicted on the muscle tissue by the dumbbells. [2]

It's important to lift relatively light weights on this exercise because the movement is most challenging when your elbows are fully extended. So be sure sure to lower the dumbbells under control (for a count of three ideally) so that you don't hurt your joints or overstretch your muscles.