Learn how performing unilateral cable curls could beef up your biceps. 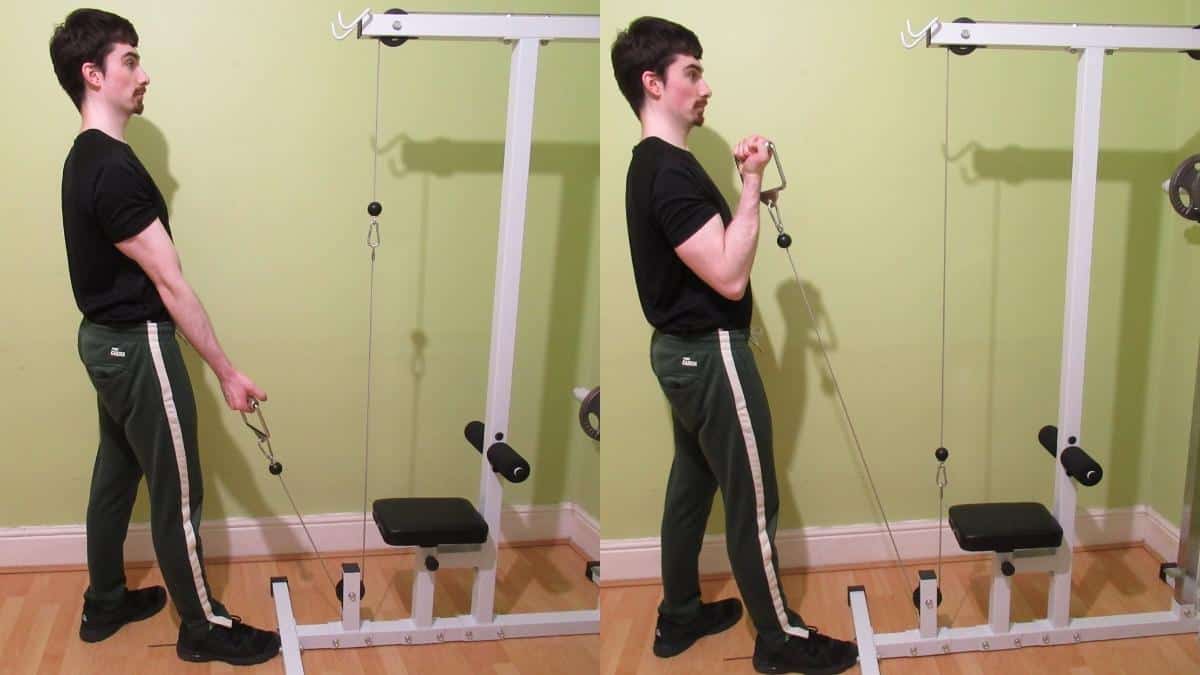 The single arm cable curl is an effective muscle-building exercise because it really isolates your biceps. And by training your arms unilaterally, you can get a better pump by focusing 100% of your attention on each individual bicep.

There are two common ways to perform single arm cable curls. The first is where you face away from the machine and let your arm drift behind your body. The second method is where you face toward the cable station. We're going to learn how to perform the latter version in this article, but you can also find a comparison in the alternatives section if you want to learn the differences between the movements.

How to do a standing one arm cable curl

The single arm cable curl takes twice as long to perform as standard bicep curls because you have to train each arm separately. But this mild inconvenience has some trade-offs that could be worth it depending on your muscle-building goals.

If I asked you to squeeze every muscle in your body at the same time, you might be able to do it. But due to having to focus on so many different body parts, you wouldn't be able to flex any particular one of those muscles with maximal effort.

We can use this fact to our advantage for building up our biceps.

When your brain only has to focus on one muscle (particularly a small one like the biceps), it naturally creates stronger peak contractions and more powerful pumps, which can result in more hypertrophy if you lift consistently.

Moreover, by intensely focusing on each individual bicep, you minimize the chance of your stronger muscles taking over, which, again, gives you more bang for your buck in terms of bicep development.

This is why unilateral cable curls are one of the best bicep exercises for definition that you can perform.

Muscle imbalances not only reduce the symmetry of your physique, but they also make it harder to perform compound exercises (like barbell rows and chin-ups) that demand similar bicep strength from both sides of your body.

But by performing the 1 arm cable curl on a weekly basis, you can help your weaker arm to catch up to your dominant arm in both size and strength. [1] This is because by focusing intensely on each bicep, you can be sure that each side of your body is receiving equal work.

Moreover, if you have particularly noticeable muscle imbalances, then you could perform additional reps or an extra set for your weaker arm, which typically isn't possible when you train with barbells, for example.

You can put this tip into practice by following one of our bicep cable workouts next time you hit the gym. Or you can just use your current routine and perform this drill as an extra exercise.

As mentioned, single arm cable curls really let you hone in on each bicep and create an extremely potent muscle pump. But did you know that you're actually stronger when you train your arms unilaterally? [2]

Since your brain only has to think about contracting one muscle at a time, all of the force that your central nervous system produces goes directly toward that one arm rather than being distributed over both of your biceps.

This is one reason why some bodybuilders recommend performing more isolation exercises if you have a lagging muscle group.

Now for the comparison that I promised you at the beginning of the article. The behind-the-back cable curl is essentially the exact opposite of the regular standing one arm cable curl where you face the machine.

The behind-the-back version emphasizes the long (outer) head of the biceps because your shoulder is extended behind your torso. The variant in this article works more of the short (inner) head because your arm is by your sides or slightly in front of you as you curl the weight.

Therefore, for optimal bicep development, you should probably include both various in your program. Note that you can perform them on different days or in the same workout. As long as you're doing an exercise that emphasizes each head of the biceps within your routine somewhere, then you're good to go.

The cable rope hammer curl is another quality exercise because it works the two muscles—the brachialis and the brachioradialis—that the standard unilateral cable curl doesn't train optimally.

And if you want an exercise that's completely different, then give the one-arm high cable curl a try. This drill trains the biceps in their shortest anatomical position, and as such, it produces what's likely to be the most intense bicep pump you'll ever experience from exercises (yeah, it's that good).

Is the one arm cable curl a good bicep building exercise?

The single arm cable curl is a top-tier bicep exercise that shouldn't be ignored if you're in the pursuit of upper-arm hypertrophy.

By letting you focus 100% of your attention on each bicep, the one arm cable curl produces powerful muscle pumps and lets you make sure that each arm receives equal work. Thus, it's also an excellent exercise for improving the symmetry of your physique by lessening any muscle imbalances that you may have.

The movement featured prominently in our back and bicep workout for ladies. But anyone seeking to improve the size and strength of their biceps while retaining their symmetry will benefit from performing one arm cable curls weekly.