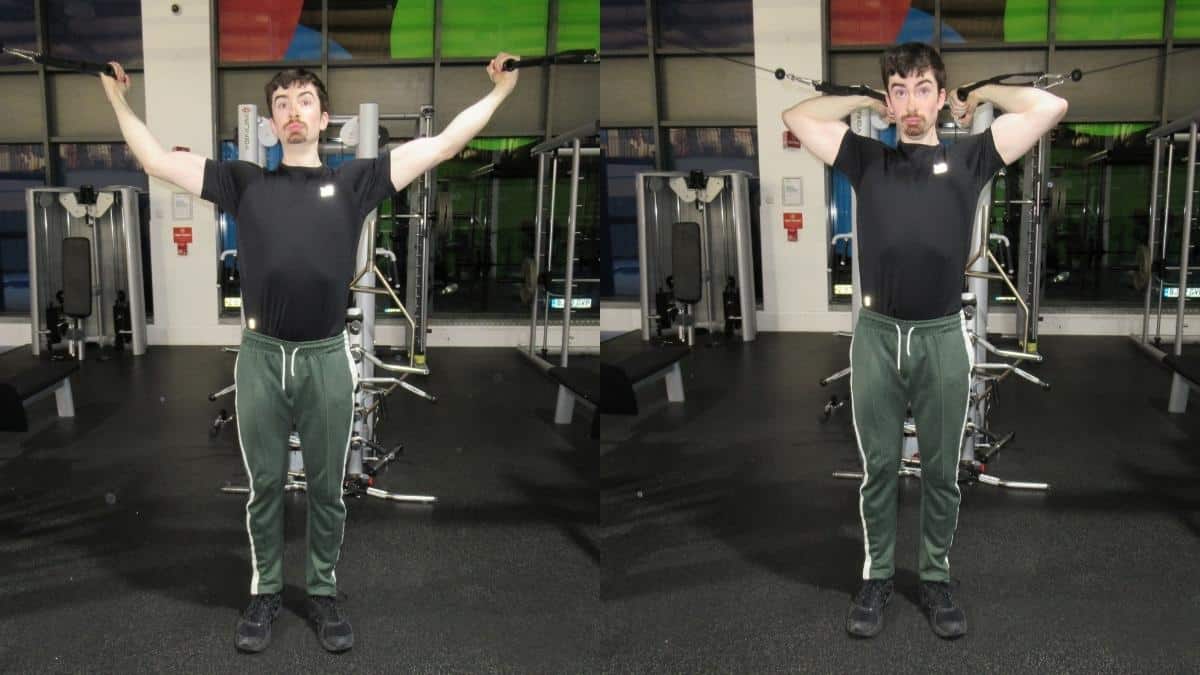 The high cable curl, also known as an overhead bicep curl, is one of the only exercises that trains all four functions of the biceps simultaneously.

Of course, you can train these functions—elbow flexion, forearm supination, shoulder flexion, shoulder abduction— in the same workout but with different exercises.

But why do in four exercises what you can accomplish with one?

As you'll soon learn, though. There are a lot more benefits to high cable curls than just convenience. Cables are easy on the joints and deliver a powerful muscle pump when you lift with the proper form. So lets into the optimal technique for this bicep-blasting exercise.

How to do an overhead cable curl with proper form

Here you'll learn how to do two-arm high pulley curls with the optimal muscle-building form. The technique is virtually the same for one arm high cable curl but with a few nuances that we'll discuss in more detail in the variations section of this article.

Few exercises pump up the biceps as reliably as the high pulley cable curl does. And that's because it provides a peak contraction that's virtually unrivaled in intensity. Yet, if you make any of these 5 form mistakes, then you'll quickly turn this movement into just another average bicep exercise.

Curling in front of your head

Although the main functions of the biceps are forearm supination and elbow flexion, the biceps also assist with shoulder abduction (raising your arms out to the sides). [1] As such, to absolutely maximize your bicep stimulation during the cable crossover curl, you need to fully abduct your shoulders as if you were doing a lateral raise. This upper arm positioning is why the exercise is commonly referred to as a crucifix curl.

Also, avoid curling to your head because your head will inhibit your range of motion.

Not actively supinating your wrists

Research shows that the short (inner) head of the biceps is most active during combined flexion and supination. [2] This means that when you flex your elbows (i.e., when you curl the handles behind your head), you should also have supinated palms (palms that are facing up toward the ceiling).

Don't turn your palms into a neutral or pronated position as you lower the weight. Keep your palms supinated for the entire duration of the set, and you'll get rewarded with thicker arms in due time.

Also, think about turning your pinky finger inwards as you curl the handles because this increases the amount of forearm supination and thus also intensifies the peak contraction.

Not elevating your shoulders

We can use this simple fact of human anatomy to our advantage to build bigger biceps. By raising your shoulders up while their slightly behind you, you're increasing the involvement of the biceps long (outer) head because that particular head of the biceps, unlike the short head, actually crosses the shoulder joint.

You can take this a step further by raising your elbows as you contract your biceps, which, again, will increase the involvement of your long head because it's an example of combined shoulder flexion (raising the handles up) and shoulder abduction (raising your arms out to the sides).

In order to get a full biceps stretch during overhead curls, you need to use a cable machine that lets you raise your arms to your sides—elbows fully locked out—without the weights touching the stack.

For most people, a long rather than compact cable crossover station is the only equipment that will allow them to perform a proper two-arm high pulley cable curl.

But if your wingspan is too large for the machine, then you can do the exercise in a kneeling position and still get the same results. This works because now the cables have to travel down as well as to the sides of the pulleys.

If you still can't attain a full biceps stretch in the kneeling position, then you can just do the one arm high cable curl. If anything, the single-arm version will enable you to lift heavier weights. Plus, because you only need access to one cable pulley, you can do the one-arm variant on any cable machine, which is particularly helpful if you train in a busy gym.

Trying to fit your body to the machine's dimensions

Despite not being able to attain a full range of motion on the overhead cable curl, some stubborn lifters try to force their body to fit the dimensions of the cable machine by performing partial reps.

While this training style has its place, it's not optimal for muscle growth because, for maximum development, muscles need to be stretched as well as contracted under resistance.

So as mentioned, if the machine is too small for your hulking frame, then just do the one-arm version. Sure, your workout will take a bit longer, but the end result of bigger arms will be worth the mild inconvenience of unilateral training.

There are many other pulley-based exercises, such as the standard one arm cable curl, that reliably build bigger biceps with enough consistency in the gym. So what's so special about the high cable curl? Let's find out!

Free weights have a reputation for building mass, whereas cables are generally thought of as a training tool for "sculpting" the muscle or creating more definition. This assumption is only half true.

Free weights most definitely build muscle mass. But cables are just as effective for generating robust hypertrophy when used correctly. And the humble cable overhead curl is a shining example of such an exercise.

Unlike free weight exercises, it provides constant tension. How?

Because the moment you lift the handle, the weight stack becomes elevated, which means that your biceps have to resist it.

Moreover, with crucifix curls, you're getting shoulder flexion and abduction in addition to elbow flexion and forearm supination. In other words, you're training all of the biceps functions in one fell swoop.

Not only does the ability to train all of the bicep functions simultaneously make Hercules curls an incredibly efficient exercise, but it also means that you're maximizing your bicep stimulation on every set that you perform (with good form, of course).

Since tendons and ligaments take longer to recover than muscle tissue, using a more joint-friendly training tool like cables can help you to maximize your bicep gains because when your connective tissue is able to heal faster, you're also able to train your muscles more frequently.

Keep this in mind next time you're debating whether to do a two-arm cable curl or a dumbbell curl. Both have their place, but the former is definitely a bit more joint-friendly.

From a kinesiology perspective, muscles have three lengths; short, middle, and long.

The Hercules curl trains the bicep in its shortest position, which means that it naturally creates a more intense peak contraction than, say, incline curls, which work the biceps in their lengthened or stretched position.

As such, exercises that train your muscles in their shortest anatomical position tend to produce a stronger pump. This might not have much bearing on actual muscle growth since "the pump" is just a temporary perk of lifting weights, but seeing your biceps inflate before your eyes can certainly keep you motivated.

There are some excellent overhead cable curl alternative exercises out there. For example, cable hammer curls really "hammer" the brachioradialis (a key forearm muscle) and the often neglected brachialis muscle, which can actually help to push your biceps out and make them appear rounder.

Yet, with a few simple modifications, you can upgrade regular cable crossover curls so that they work your biceps from different angles and recruit extra muscle fibers, in addition to those stimulated during the standard version.

The one-arm high cable curl really lets you hone in on each bicep and focus 100% of your attention on getting the strongest possible contraction and the deepest possible stretch on every arm-pumping rep that you perform.

You can also lift heavier weights on one arm cable curl exercises because your brain only has to focus on flexing that particular arm, which gives your nervous system a greater force output potential.

Moreover, if you have a dominant arm, then ditching the two arm high cable curl for the one-arm variation is a clever method for improving the symmetry of your physique.

The kneeling cable overhead curl is ideal for lifters with longer wingspans because it lets you get a full bicep stretch without the weights hitting the stack, which would take tension off your biceps altogether.

The technique is exactly the same as it is for the standing version. However, It's arguably better than the single-arm version because you can essentially perform your sets twice as fast since you're training both arms together.

The downside is that you need access to an entire cable crossover station, which isn't always feasible in crowded public gyms.

You can also click the link to see a complete cable biceps workout if you're looking for a full routine to follow at the gym (or at home if you have a cable machine!).

If you want to emphasize the long head of your biceps and experience a muscle stretch that rivals the one offered by incline curls, then be sure to give neutral-grip overhead curls ago next arm day.

This drill is similar to a hammer curl, except that you're doing it with your arms out to your sides. The contraction isn't as intense as it is during the regular overhead cable curl—and you certainly won't get as much bicep activation—however, you will feel a much stronger stretch. So consider combining both exercises in your routine (not necessarily on the same day) for the best results.

You can also perform the behind the body cable curl to work the outer head of your biceps. So in this regard, it's the exact opposite of the overhead curl, which emphasizes the inner head.

Conclusion: How effective are overhead curls for building the biceps?

The high cable curl trains the biceps at their shortest muscle position and, as such, provides a pump that's hard to replicate in intensity with more classic curl variations. Since your biceps are naturally weaker in their fully shortened (and fully lengthened, for that matter) muscle positions, you might want to perform the overhead cable curl near the beginning of your workout when you're at your freshest.

Other than that, just make sure to keep your palms supinated throughout the whole set so that you maximize the activation of your biceps short head and really develop that sleeve-busting bicep thickness that makes your physique pop.

Also, stick with sets of 12-20 reps because, as you know, the biceps are weakest in their shortened muscle position. So by using high reps, you can keep the tension on your arms rather than bringing other muscles into the equation.