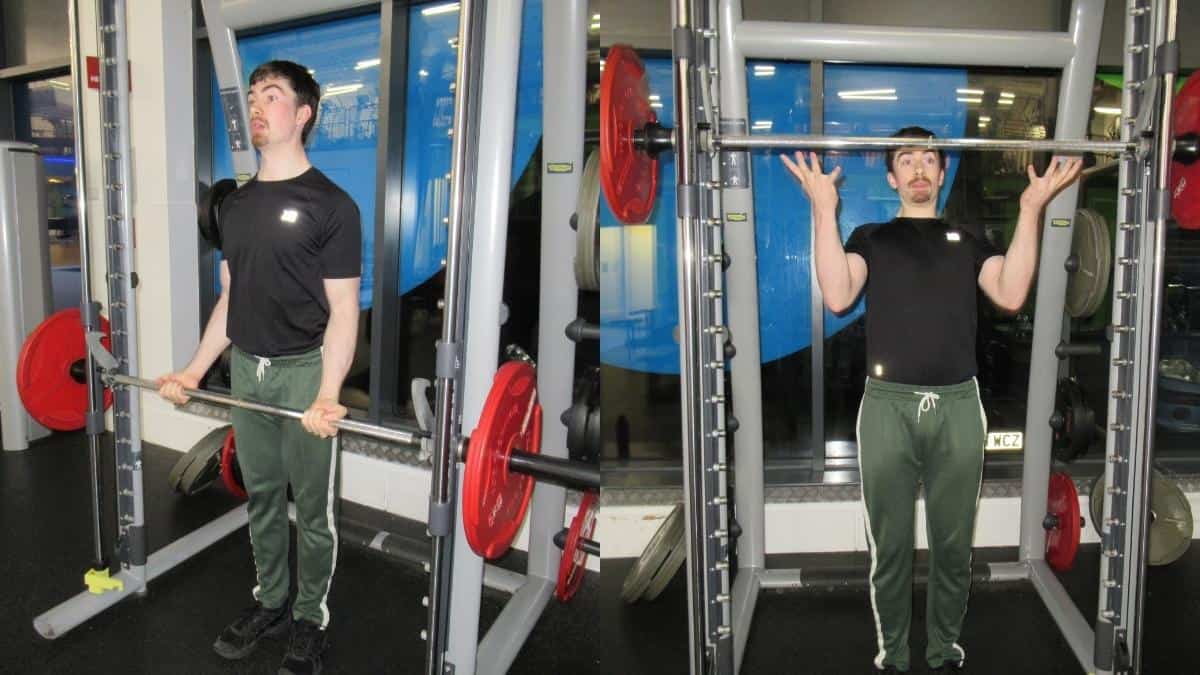 The Smith machine curl throw is an explosive exercise that trains the biceps brachii muscle. It was invented by Jim Stoppani, PH.D. to help lifters improve their bicep mass by increasing the size of their fast-twitch muscle fibers.

The following article shows you how to do the Smith machine curl throw correctly and then discusses the main benefits of the exercise.

How to do Smith machine curl throws

Since the purpose of Smith machine curl throws is to improve your bicep explosiveness, perform them at the start of your workout when your biceps have the most strength.

There are three main benefits of including the Smith machine curl throw in your training program—one for bodybuilders, one for powerlifters, and one for sportspeople.

To perform the Smith machine curl throw correctly, you need to throw the bar out of your hands as forcefully as possible. Doing this will recruit the maximum amount of fast-twitch muscle fibers, which are the muscle fibers with the highest strength gaining potential.

So even though you'll be lifting light on this exercise, the Smith curl throw will still supercharge your strength if you perform it consistently because you're moving the bar so explosively.

Just remember to always use a thumbless grip. If you don't, then you won't actually be able to throw the bar out of your hands.

Also, don't attempt this exercise with free weights. The Smith machine makes it far easier to catch the bar, which means that you can focus on lifting explosively rather than on your coordination (i.e., catching a falling free weight).

The stronger that you can make your biceps via the Smith machine curl throw, the more weight you'll be able to lift. When you're able to lift heavier poundages, you're also able to overload your biceps with more resistance and thus make them grow faster.

This is why you should do curl throws first in your workout. You want to be able to dedicate as much explosive force to the exercise as possible. That's not going to happen after you've already done 10 sets of curls, so make sure to prioritize curl throws if you want to build your biceps.

In practice, you can include them in your program for 6-12 weeks and then go back to starting your sessions with regular curls. This will enable you to perform your normal exercises more explosively and thereby curl heavier weights.

You can cycle them in and out of your program throughout the year if you want to add more intensity to your curls. I wouldn't keep them in your routine all the time, however, because they don't build much mass directly. Rather, they prime your fast-twitch muscle fibers for lifting heavier over the long term.

Any athlete who uses their arms in their chosen sport is missing a trick by not doing Smith machine curl throws. So if you want to get ahead of your competition, train your biceps explosively.

After all, you don't try to throw a football or rugby ball in a slow and controlled manner; no, you throw it to your teammate as quickly as possible.

The Smith machine curl throw, as the name suggests, will enhance your throwing power.

On the other hand, if you want to focus purely on building your biceps (after all, you need still need muscle size to be explosive), then you can also do the Smith-machine drag curl to focus on gaining mass.

The verdict on the Smith machine curl throw

The Smith machine curl throw is definitely one of the most unusual bicep exercises that you can do in the gym. But it's also a movement that benefits everyone. Unless, of course, you don't have access to a Smith machine.

This exercise will help you become a better athlete by improving your throwing power.

Similarly, the movement will help you to lift heavier poundages if you're a weight lifter because it primes your biceps for strength by training the fast-twitch muscle fibers exactly how they're meant to be trained—explosively.

This extra strength will enable you to overload your biceps with more resistance in order to stimulate faster muscle growth.