How to do a squat bicep curl

Strengthen your legs and tone your biceps with the squat curl. 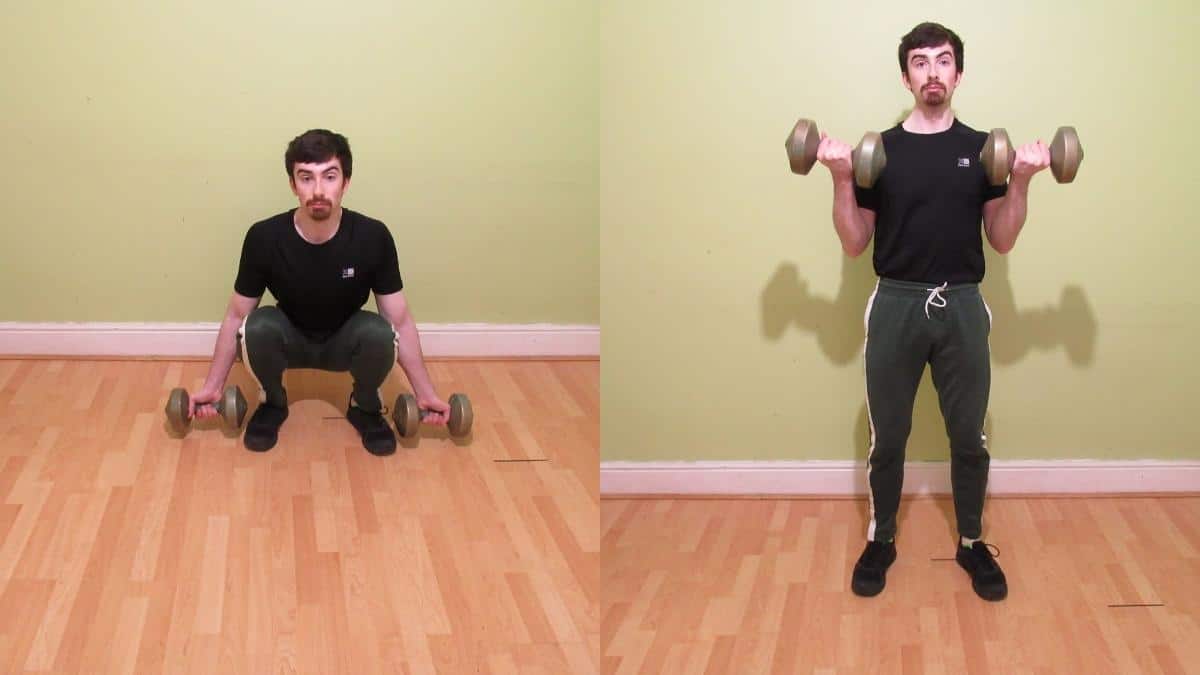 The bicep anatomy is an area that many weight lifting enthusiasts want to develop to the max. But what good is a muscular pair of arms without an equally strong pair of legs?

The squat bicep curl is an effective, time-efficient way to train your bis and thighs together. It's a high-intensity movement that combines a weighted squat with the curl exercise to blast your biceps and strengthen your legs simultaneously.

All you need to do a squat curl is a pair of weights, a small workout space, and a tolerance for lactic acid. So whether you're pumping iron in the weight room or enjoying your training session at home, squat curls always make a great, heart-pumping addition to your workout.

How to perform squat curls

There's more than one way to do a squat with bicep curl. So if you want to shift the emphasis of the exercise onto different muscles or kick the intensity up a gear, then definitely try out these variations in your next workout.

You can also perform a dumbbell squat curl press if you want to integrate your pushing muscles (shoulders and triceps) into the regular squat curl to make it a full-body exercise.

To train one leg at a time, which is recommended if you have muscular imbalances, performing bicep curls in a lunge position is a wise idea because it will ensure that both of your legs receive roughly equal work.

This version of the squat to bicep curl is for you if you want to make the exercise tougher on your lower body. Specifically, you'll feel more tension in your glutes, inner thighs, and quadriceps when you perform this leg strengthening variation.

To do a sumo squat with bicep curl, hold a pair of dumbbells close together in front of your thighs. Make sure that you're stood up straight with your feet slightly wider than shoulder-width apart and flared out slightly. Then, squat down by lowering your hips toward the floor and pushing your knees out. It's okay if you lean forward a little bit as long as your back is straight.

Keep squatting until your knees are at 90 degrees or until the weights touch the floor. Press through your feet as a whole (not just your heels, midfoot, etc.) to push yourself back up. Immediately perform a curl once you're stood up straight and then squat down again for your next rep. Aim to perform 3-5 sets of 8-20 reps in total.

You can get a similar effect to the sumo squat bicep curl by doing a reverse lunge to bicep curl because both movements are hip dominant. The difference is that the lunge version requires slightly more space and demands greater cardiovascular fitness because you have to perform a separate set for each leg. Hence, it also takes longer to perform.

Add yet more intensity to your squat curls and speed up your sets by performing a simultaneous squatting and curling motion—a great exercise for arms and legs.

Start by standing up straight and taking a slightly wider than shoulder-width stance. Hold the dumbbells in front of your thighs, but this time with an underhand grip.

Begin the rep by squatting down to the ground while simultaneously curling the weights toward your chest. Once your knees are at a 90-degree angle, push yourself back up and lower the dumbbells back down.

See what your legs are really made of by doing the static squat bicep curl. This exercise combines an isometric squat with dynamic bicep curls to build muscle while testing your endurance. It's definitely an advanced variation, so make sure that you've already mastered the standard squat with bicep curl before moving on to this drill.

Start out by taking the usual slightly-wider-than-shoulder-width stance and flaring your feet out slightly. Then squat down by pushing your knees out and lowering your hips toward the ground. Once your knees are 90 degrees, perform 5-15 reps of curls before pushing yourself back to the starting position. This is one round.

Conclusion: Should you do a squat with bicep curl?

The squat curl is a versatile exercise that you can perform to achieve a variety of different goals. For example, if you want to strengthen your legs as much as possible, then static squat curls are your best bet because they put the most amount of tension on your quads and glutes.

On the other hand, if you've never done this movement before, then you should start with the standard squat bicep curl so that you can learn the correct technique. You can increase the intensity by performing your reps more explosively, which will also help to recruit the fast-twitch muscle fibers and therefore make your legs stronger.