Learn the difference between each type of pushdown and discover which version is most effective for training your triceps. 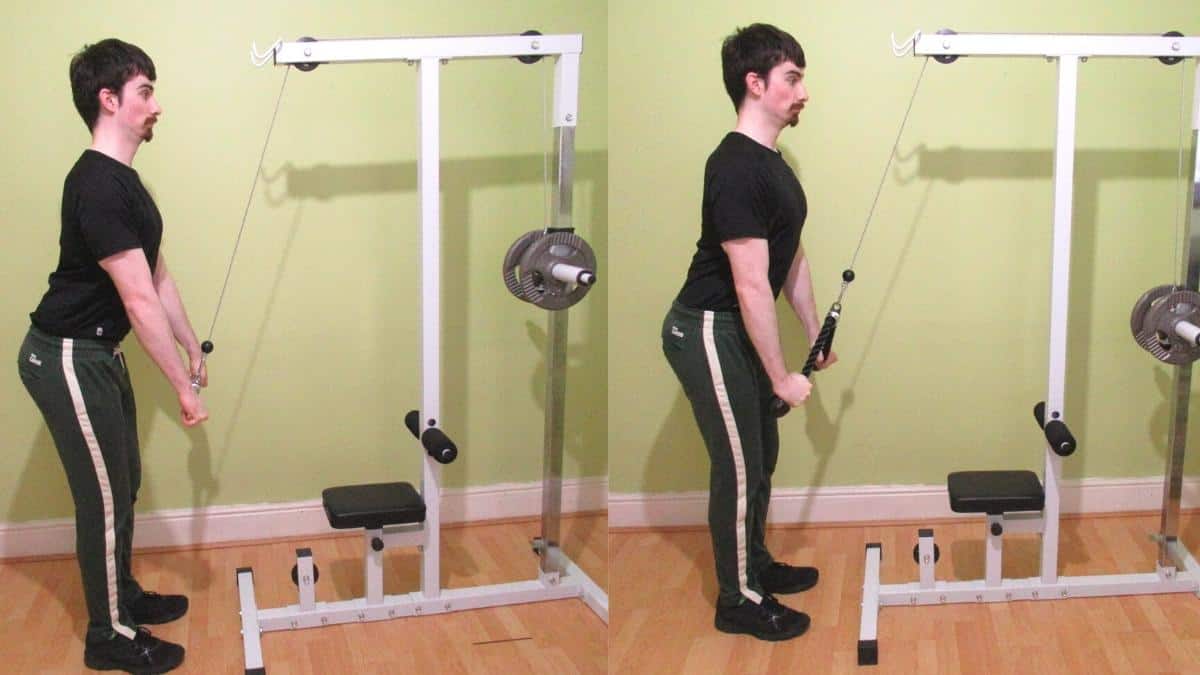 But what’s the difference between all the types of pushdowns?

And which pushdown is most effective for developing the triceps?

The following series of pushdown comparisons answers these two questions and more.

This is because straight bars are easier to stabilize than rope attachments because bars are fixed, whereas ropes are somewhat free-moving.

Yet, since your triceps just respond to tension (they don’t know what “weight” is), this extra resistance doesn’t necessarily mean that your triceps are receiving more stimulation.

On the contrary, the rope pushdown enables you to subject your triceps to more tension because you can “split” the ends of the rope—by moving them away from each other—in order to intensify the peak contraction.

Similarly, the rope pressdown is the better choice for sculpting triceps symmetry, an attribute that can never be overlooked if you train for aesthetics. This is because you have to lift each side of the rope somewhat independently, which ensures that both of your triceps are performing similar amounts of work.

Additionally, the rope puts less pressure on your joints than the straight bar because it enables you to lift with a wrist-friendly neutral grip. A straight bar, on the other hand, forces your hands into maximum pronation, which can cause wrist pain as the weights become heavier.

When you do a v bar pressdown, your wrists are in neither a neutral position nor a fully pronated position; they’re in a semi-pronated position. This means that v bar pushdowns are more comfortable than their straight bar counterpart but not quite as joint-friendly as the rope variation.

Rope pressdowns are more effective than v bar pressdowns for building proportional triceps because bar attachments are fixed, whereas both sides of the rope can move independently.

As such, whenever you do pushdowns with any kind of bar, there’s always a good chance that your stronger arm will dominate the movement.

This stronger arm dominance is significantly reduced when you use a rope because you have to lock both ends of the rope out separately.

Even though you can lift more weight on v bar pushdowns (because bars require less stabilization than ropes), this extra resistance, as mentioned, doesn’t necessarily translate into more triceps growth or even a better workout.

On the contrary, because ropes offer more freedom of movement, they also provide a better triceps stretch and contraction.

The main difference between a straight bar and a v bar pushdown is your wrist position.

Of course, not everyone suffers wrist discomfort when using a fully pronated grip for pushdowns.

Yet, the likelihood of such a grip bothering your wrists increases as the weights get heavier. So for long-term strength progression, the v bar pushdown is the better choice.

In terms of strength, you’ll likely be able to lift virtually the same amount of resistance on both exercises.

The main determinant of which exercise you’re stronger on is likely to be your wrist comfort, so stick with the movement that you a) find the most comfortable and b) that gives your triceps the best stretch and contraction.

Cambered bar pushdowns, which are also called EZ pushdowns, are essentially a wrist-friendly version of the straight bar pressdown.

EZ bar attachments are typically longer, and, most importantly, they have curved grips, which enable you to perform pushdowns with a semi-pronated wrist position.

Since cambered bar attachments are longer, you’re also more likely to avoid the problem of using an excessively narrow pushdown grip. When you grip the bar with your hands too close together, your elbows tend to flare out, and your wrists often start to hurt.

EZ attachments keep your wrists in a relatively safe position while allowing you to experiment with your grip width to find the most optimal position (ideally, you want your elbows to be tucked into your sides).

Many people say that there’s no difference between a tricep pushdown and a tricep pulldown. But as you’re about to learn, depending on what you mean by pulldown, there are actually two very big differences.

First off, reverse pushdowns are often called tricep pulldowns because when you use a reverse grip, you’re pulling the bar down with your triceps rather than pushing into it with the palms of your hands.

A tricep pulldown can also refer to a person’s lifting technique.

This transition from shoulder flexion to shoulder extension, which increases activation of the long head of the triceps, resembles a pulling motion and is one way that you can perform pushdowns.

Although, if you want my advice, I recommend keeping your shoulders still during pushdowns so that you don’t turn the pressdown into a lat exercise. You can always train the long head of your triceps with overhead extensions (not that pushdowns don’t train the long head).

The verdict: Which type of pushdown should you do for your triceps?

Should you do a straight bar or rope tricep pushdown? What about the v bar?

As you hopefully learned during this tricep rope vs bar pushdown comparison, there’s no right or wrong attachment to use for pushdowns, regardless of whether you’re doing a tricep pushdown at home or in the gym.

The most important factors are 1) your wrist comfort and 2) your triceps activation.

In my coaching experience, most people tend to find the rope and v bar pushdowns more comfortable than the straight bar version.

Similarly, rope pushdowns usually lead to the best triceps activation because they allow for the most range of motion of any pushdown exercise. Specifically, you can split the ends of the rope at the end of the rep to intensify the peak contraction, a technique that isn’t possible when you use a bar attachment.

Ultimately, your best bet is to try multiple types of pushdowns and see which works the best for you. If you really like two exercises, then you can always do more than one pushdown, ideally on different days of the week.