How to do a kneeling French press

Here are 3 kneeling French press variations that will strengthen your triceps. 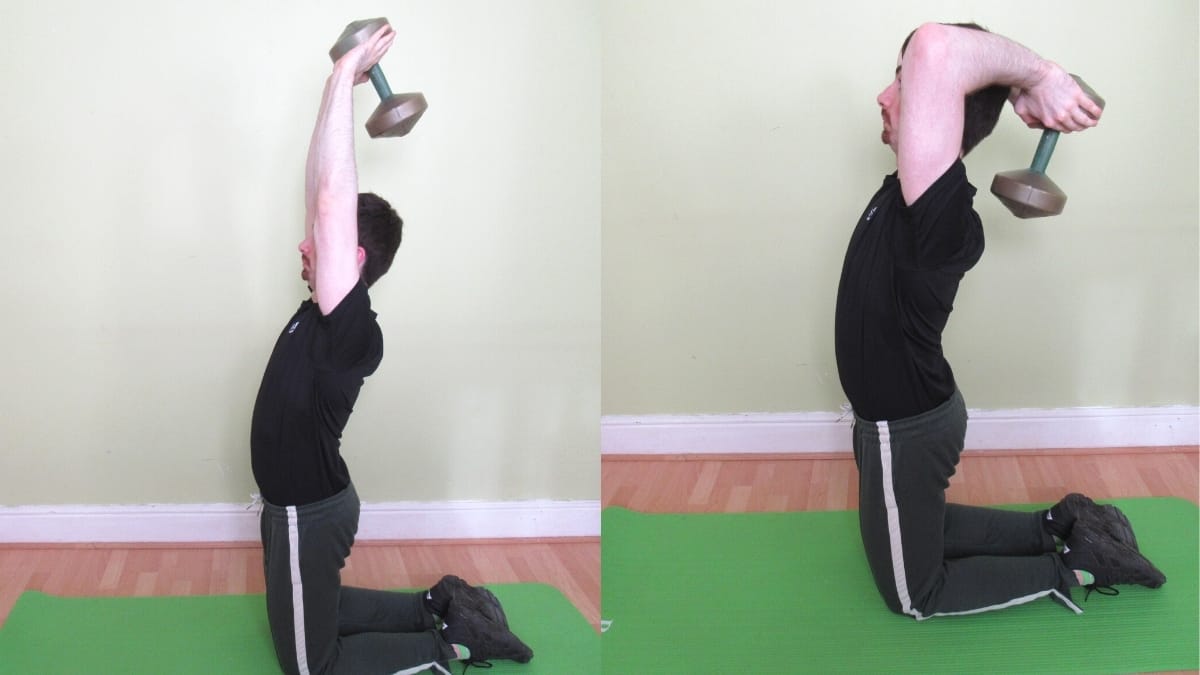 Understanding the way that the triceps brachii works is vital if you want to grow and strengthen your arms. This is because the triceps contribute far more mass to your upper arms (around two-thirds) than your biceps.

To get the best results, you need to know that the triceps have two functions; shoulder extension and elbow extension.

All three tricep heads extend the elbow. But since only the largest tricep head (the long head) crosses the shoulder joint, that’s the only triceps muscle that’s capable of performing shoulder extension.

As such, you need to put your arms in an overhead position and then perform elbow extension if you want to train your triceps optimally.

The barbell French press enables you to do just this, which is why it’s such an excellent mass-builder. But today, we’re going to be focusing on the kneeling French press so that you can strengthen your triceps while simultaneously improving your core stability.

How to do a kneeling French press

Now that you know how to do the kneeling dumbbell French press in a tall-kneeling position, it’s time to learn how to do the half-kneeling and low-kneeling versions of the exercise.

This is because, in a half-kneeling position, you can use your quadricep muscle to help your abs out in stabilizing your torso.

Just make sure to switch legs after each set so that you don’t work one of your thighs at the expense of the other.

Your quad endurance certainly won’t be the limiting factor during a half-kneeling French press, but still, you don’t want to develop or worsen any lower body size asymmetries by biasing all of the work to one thigh (unless that leg is much smaller than the other, in which case the extra work for your weaker thigh will help your legs to become more balanced).

You can do a low-kneeling French press with kettlebells, dumbbells, or any kind of bar because it’s a very versatile exercise.

In this regard, the low-kneeling French press is a brilliant exercise for hypertrophy-focused lifters who don’t have access to a weight bench.

Because you don’t have to contract your abs that hard during a low-kneeling position, you can dedicate the vast majority of your attention to training your triceps.

Of course, if you actually want to work your abs, then sticking with the tall-kneeling French press is your best bet.

The kneeling one arm dumbbell French press is a great exercise for giving your triceps equal amounts of work so that they grow in proportion.

By developing better triceps symmetry, the bar is less likely to become lopsided during your compound presses, which further equalizes the amount of stimulation that your upper body pushing muscles receive.

If you decide to do the single arm kneeling French press in a half-kneeling position, then you may also find it helpful to work your right arm while your left leg is out in front of you and vice versa so that you can better maintain your balance.

The only negative of the one arm kneeling dumbbell French press (unless you just love being in the gym) is that you have to do twice the number of sets because you’re training each arm separately.

This unilateral training style obviously makes your workouts take longer and may not be worth it, given that you could just do a two-arm kneeling French press with a separate dumbbell in each hand.

What other types of French press can you do in a kneeling position?

You can do the EZ-bar French press in a kneeling position if you want to overload your triceps with more resistance than a dumbbell will allow. EZ bars also have the added benefit of semi-supinated grips, which makes the bar more comfortable to hold onto for your wrists.

Unlike free-weights, bands and cables provide resistance at every point in the rep, which means that your triceps naturally receive a better pump because they have to contract harder.

The med ball French press is another good option if you don’t want to use dumbbells for the kneeling French press because medicine balls (if they’re made of rubber) are typically very easy to grip.

When a training implement is easy to grip, you can generate more force and push heavier poundages, which ultimately means that you can subject the target muscles to more resistance.

The kneeling DB French press is a valuable exercise for building your triceps and strengthening your core at the same time. This is because your abs have to contract in order to keep your body in a stable, upright, force-producing position.

All types of kneeling French presses are convenient in that they require nothing more than a single dumbbell and, ideally, an exercise mat. Since you don’t need a weight bench or any fancy gym equipment, the kneeling French press is particularly useful for those working out at home.