Are you making these 6 v bar pushdown mistakes? 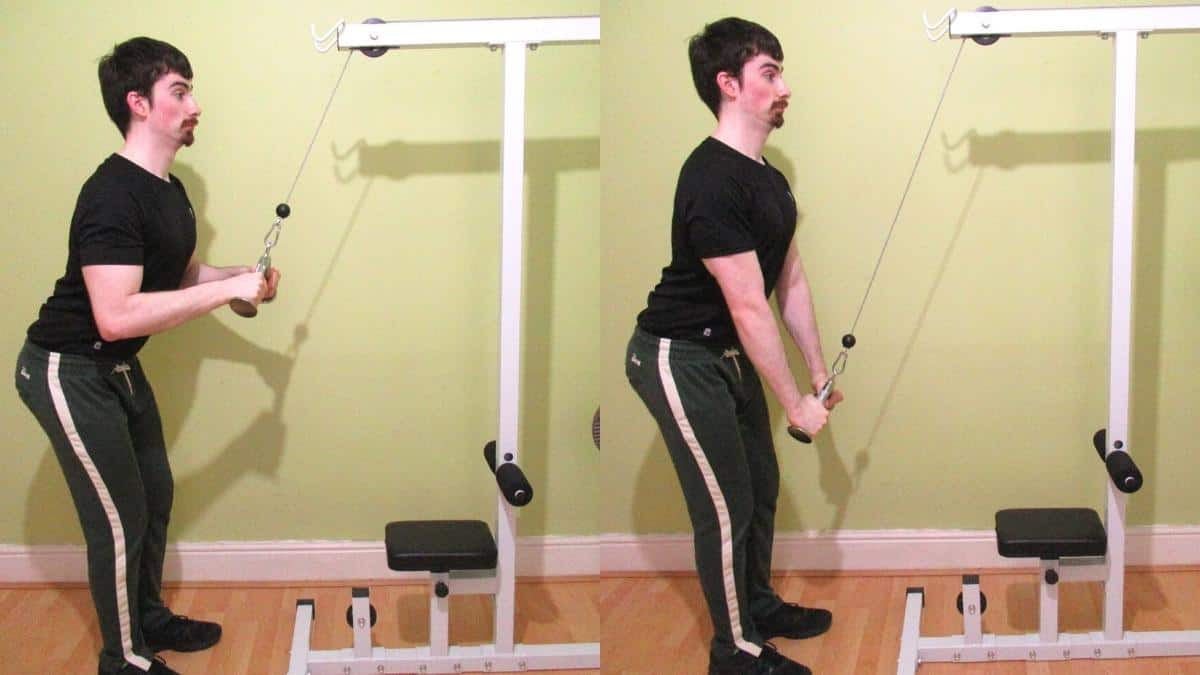 The v bar tricep pushdown is an effective exercise for isolating the triceps because, when performed correctly, all the movement occurs at the elbow joint, the extension of which is the primary function of the triceps.

Unlike straight bar pushdowns, which force your wrists into extreme amounts of pronation, the v bar pushdown enables you to press with a joint-friendly semi-pronated grip. This halfway-to-neutral hand position takes the pressure off your wrists, which in turn helps you to focus purely on training your triceps.

See our straight bar vs v bar pushdowns comparison for more information on the differences between these two popular pushdowns.

The following guide shows you how to perform a cable v bar press down with the optimal technique and then explains the mistakes that you need to avoid in order to get the best results.

Table of Contents show
V bar tricep pushdown exercise details
How to do a v bar pushdown
V bar cable pushdown mistakes
Leaning into the movement
Letting your elbows flare out or drift too far forward
Not locking out your elbows
Performing half reps
Failing to control the attachment
Standing too far away or too close to the machine
Cable v bar press down training recommendations
Conclusion: Is the v bar press down worth performing?

How to do a v bar pushdown

The tricep v bar pushdown is a relatively simple exercise but one that many lifters still perform incorrectly due to a desire to lift as much weight as possible. Make sure that you’re not making any of these v bar pressdown mistakes if you want to maximize your tricep training efforts.

Leaning into the movement

You wouldn’t believe it the way that some people perform it, but the v grip pressdown is, in fact, an isolation exercise for the triceps.

That’s right; I said the triceps.

Not your chest, not your shoulders, but the large muscle on the backs of your arms, the triceps.

As such, you need to ensure that all of the movement occurs exclusively at the elbow joint. Don’t round your shoulders and lean into the movement because doing so turns your tricep pushdown into a compound press.

Even though pushing heavier poundages with the help of your chest and delts might make you feel stronger, your triceps muscles won’t actually be gaining any extra strength because they’re getting so much assistance from other body parts.

Instead, pin your elbows to your sides and keep the bar away from your chest. If you only allow your elbow joint to hinge up and down, you’ll feel much more tricep activation than if you let your chest and shoulders take the strain.

Letting your elbows flare out or drift too far forward

As we established, turning your v-bar pushdown into a compound press is never a good idea for maximizing your triceps development.

However, you also need to be wary of what your back muscles are doing.

Repeatedly letting your elbows drift forward and back again during the v-bar push down mimics a pullover and, as such, causes your lats to become activated at the expense of your triceps, which defeats the purpose of the exercise.

You can remedy this issue by always keeping your elbows tucked in.

If that doesn’t help, then you might need to reduce the resistance or stand closer to the machine.

Sometimes, when you stand too far away from the pulley, the force of the cable system pulls your arms out of position and causes your form to degrade.

Not locking out your elbows

What’s the main function of the triceps?

If you answered “elbow extension,” then you’re correct.

Knowing this fact, it’s crucial to lock your elbows out during every v bar extension rep if you want to achieve optimal results.

Sure, stopping short of lockout may result in a marginally better pump. But performing partial reps cuts a large chunk out of your range of motion, and besides, the pump isn’t the main driver of hypertrophy; mechanical tension is.

Progressively subjecting your triceps to more volume in the form of heavier weights and extra sets is what leads to muscle growth. The pump is just a nice bonus that you get when you perform enough reps and sets.

So unless you just want to look good in the gym by getting a pump with partial rep v bar pressdowns, make sure to fulfill the primary triceps function by locking your elbows on every. Single. Rep.

Besides failing to lock their elbows out, there’s another way that lifters shortchange themselves during v bar tricep extensions: not raising the bar high enough once they release the contraction.

While the peak contraction is undeniably important for hypertrophy, the eccentric phase of the v bar pushdown rep is equally crucial for developing your triceps.

So, after contracting your triceps, release the contraction in a controlled manner and raise the bar—without letting your elbows drift forward—until it gets to around chest height.

You know that you’ve gone far enough when your forearms push right up against your biceps, and the angle at your elbow joint becomes less than 90-degrees.

Failing to control the attachment

As mentioned, making the most of the eccentric phase of a v bar cable pushdown is crucial for maximizing muscle growth.

But how exactly do you “make the most” of each rep?

Well, let me first explain how to waste it.

Letting the v-bar shoot upwards after releasing the contraction robs your triceps of tension and is a strong indication that you’re lifting too much weight.

Instead, slowly release the contraction and let the v bar move up as a consequence of your triceps getting stretched. Think about moving your forearms toward your biceps while keeping your elbows as still as possible (i.e., don’t let them drift forward).

As a general rule of thumb, the eccentric portion of the v bar pressdown rep should take twice as long as the concentric phase of the rep. Of course, there’s no need to count once you nail the technique.

Standing too far away or too close to the machine

Many people stand too far away from the machine during v bar pushdowns and then wonder why their arms get pulled out of position.

Suffice to say, putting so much work into core stabilization makes it hard to train the target muscles because your focus is constantly getting diverted away from your triceps and onto other body parts.

The solution, of course, is to simply stand closer to the pulley so that your body doesn’t feel like it’s constantly being dragged forward.

But there’s a sweet spot.

You don’t want to stand right next to the machine because doing so will limit your range of motion and thereby your triceps activation.

Your best bet is to take a few small steps away from the machine and then hinge at the hips (unless you’re doing a Swiss ball triceps pushdown). This way, the bar won’t hit your legs when you lock out your elbows, but you also won’t be standing so far away from the pulley that your body gets dragged out of position.

Perform around 3-5 sets of the tricep v bar extension per workout and do 1-3 sessions per week.

Since the v bar tricep pulldown doesn’t cause as much muscle damage as the likes of overhead extensions and skull crushers (because it doesn’t place the triceps under a maximal stretch), you can generally perform more training volume.

A training frequency of twice weekly will be optimal for the majority of lifters. But you may also wish to limit the cable v bar pulldown to once per week in order to allow for a greater variety of tricep exercises in your routine.

As for reps, you should stick to moderate and high repetitions (10-15) because single-joint exercises like the v grip tricep pushdown can be quite elbow-intensive when you lift too heavy.

Conclusion: Is the v bar press down worth performing?

The angled cable triceps extension is an excellent exercise for a few reasons.

First off, the v bar triceps extension, like the tricep EZ bar pushdown, is typically quite joint-friendly. This is because v-bars enable you to keep your wrists in a semi-pronated position.

Additionally, the v bar tricep pushdown allows you to lift heavier than the likes of the rope pushdown because v bars are easier to balance than rope attachments.

While not as common as other cable attachments, v bars are still widely available in most fitness facilities. So if you have access to an angled bar, then I definitely recommend giving the v bar pushdown a go in your next workout.