Learn the differences between Zottman curls and hammer curls and how they affect your gains. 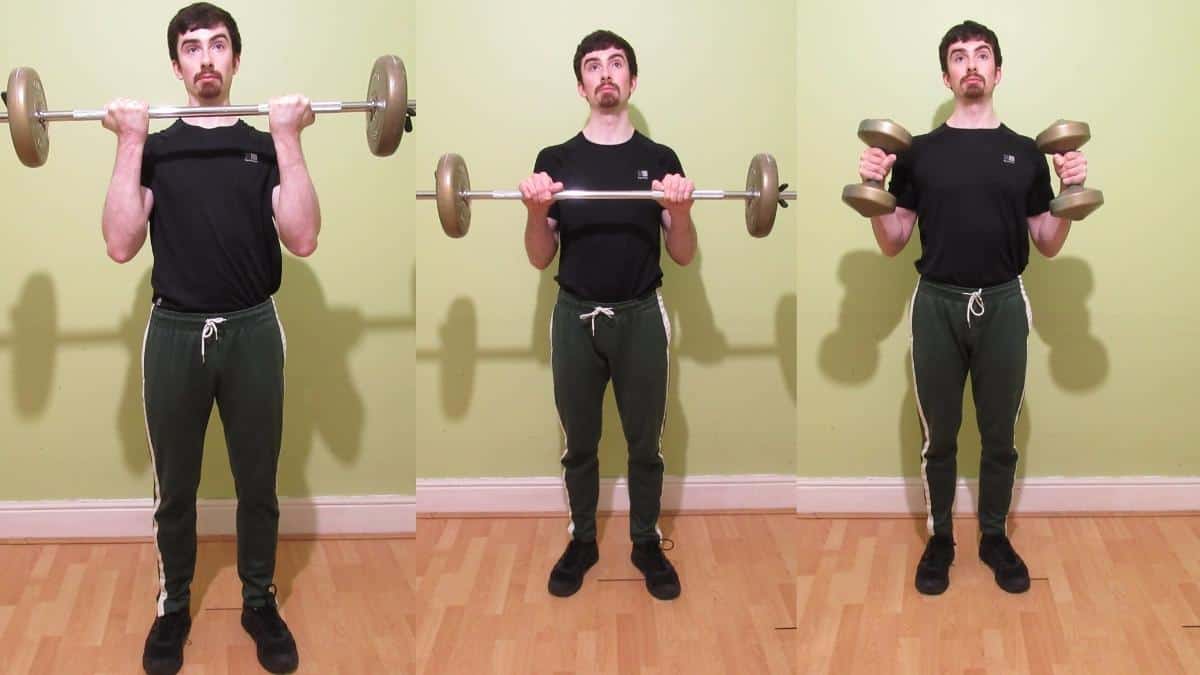 Besides elbow flexion, the main biceps brachii action is forearm supination. Since neither Zottman curls nor standing hammer curls perform this function, both exercises heavily work the brachioradialis and brachialis muscles in addition to the biceps.

But which movement is most effective for muscle growth and strength development? And, crucially, do you need to do both exercises for optimal results?

You'll learn the answer to those questions—and more— over the course of this Zottman curl vs hammer curl debate.

Which one builds better biceps?

Hammer curls enable you to lift heavier weight than Zottman curls, which in turn means that you can overload your arm muscles with more resistance and make them grow larger. So based on this line of reasoning, hammer curls are the superior choice.

However, in order to illuminate the difference, we need to look at hypertrophy on a per muscle basis.

We know that curling with your palms up is optimal for bicep development. And since the Zottman curl has you lift the weight with a supinated grip during the concentric phase of the rep, it's arguable that it's better for building the biceps.

That said, Zottman curls also necessitate that you lower the weight with an overhand grip. This is the position in which the biceps are least activate and is thus the worst kind of grip for bicep muscle growth.

Hammer curls, on the other hand, are more of an overall mass builder. But since you're curling with a neutral grip, they don't optimally stimulate the biceps because your palms aren't facing up. However, they also don't completely turn your biceps off either by forcing you to curl with an overhand grip like Zottman curls do.

So in terms of producing bicep gains, both exercises are pretty much equal.

Which is best for the brachialis and brachioradialis?

Hammer curls are likely better for building the brachioradialis because this muscle responds best to heavier weights due to its fast-twitch fiber type composition.

Zottman curls, on the other hand, are at least equal to hammer curls (if not better) for developing the brachialis. This is because the brachialis, contrary to the brachioradialis, is a slow-twitch muscle that grows best from slow rep tempos. As such, the Zottman curl is the ideal exercise since you typically slow down the eccentric portion of the rep on this movement.

On the other hand, you could argue that hammer curls are better because they enable you to lift more weight. Plus, you're only prioritizing the brachialis during the eccentric phase of a Zottman curl. In contrast, the biceps are the prime mover during the concentric part of the rep.

Which is best for gaining strength?

Hammer curls enable you to lift heavier than Zottman curls because they make use of all three target muscles—biceps, brachialis, brachioradialis.

Conversely, Zottman curls have you train with supinated palms during the lifting phase of the rep, which reduces the ability of the brachioradialis to produce force, and then it forces you to lower the weight with an overhand grip, which places the biceps at a similar mechanical disadvantage. Hence, with a Zottman curl, you're never able to use the power of your arm muscles all at once.

No, you can make gains by doing either-or. There's no need to do both exercises because they train the same muscles.

Of course, if you enjoy lifting weights and like having plenty of variety in your workout routine, then there's also no harm in doing both exercises. It might be a good idea, however, to perform them on different days to increase your training frequency, which can help you to gain muscle faster.

Which one should you perform first?

It's recommended to start with hammer curls because you'll be lifting heavier on this exercise than you will on Zottman curls, so you might as well perform them when you're at your freshest.

As you can see, you don't have to choose hammer curls or Zottman curls; you can do both. Just be aware, however, that both exercises work the exact same muscles, so you might want to pick a different movement that targets the biceps more since most people do hammer and Zottman curls to work their brachialis and brachioradialis.

The only real difference between the exercises is that you can lift heavier poundages on hammer curls, which in all likelihood will lead to faster rates of muscle growth.