Should you do Zottman curls on a preacher bench? 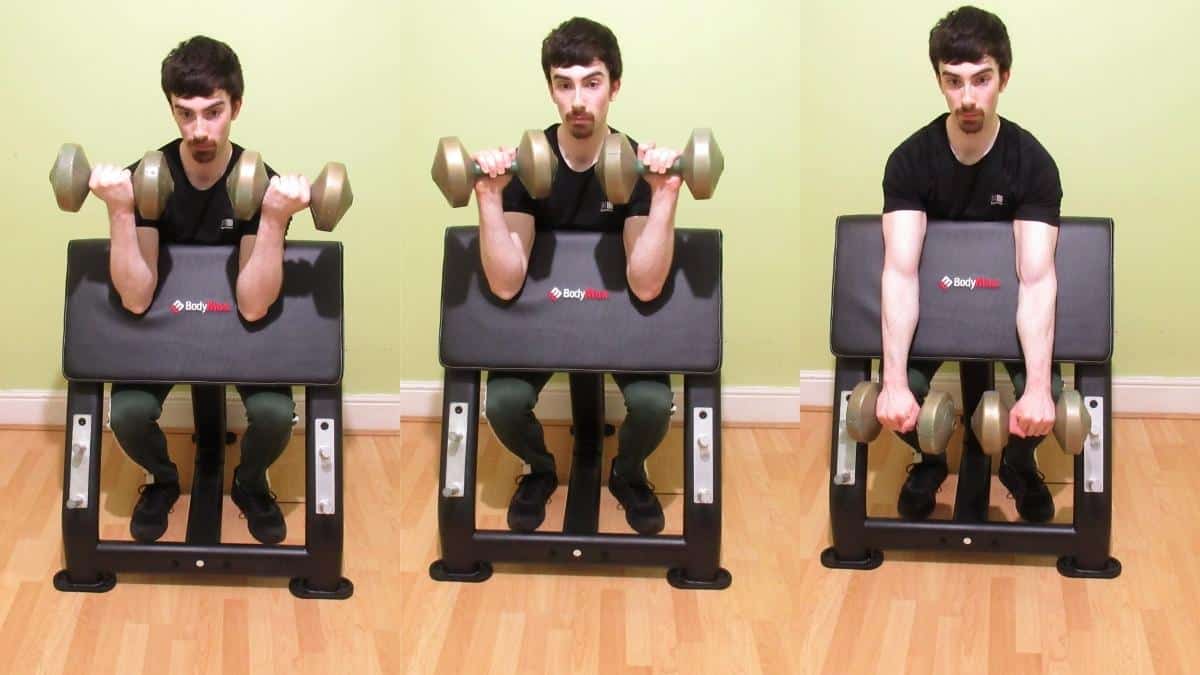 Besides elbow flexion, the primary biceps brachii action is forearm supination, which is to say rotating your hands from a palms-down to a palms-up position. With this in mind, the preacher Zottman curl is an excellent exercise because it trains both of these muscle functions simultaneously.

Performing preacher curls with an EZ bar is a great idea if you want to focus purely on your biceps. But if you want to build your brachioradialis and brachialis muscles as well, then the Zottman preacher curl is a better choice because it combines pronated curls and supinated curls into one convenient exercise.

How to do Zottman preacher curls

The dumbbell Zottman preacher curl is a convenient training drill because it works a broader range of muscles than sissy curls and other such exercises. However, as good as seated Zottman curls are for building mass, there are also a few downsides that we'll discuss as we explore the advantages.

Good for the biceps

The Zottman preacher curl provides a strong bicep contraction as you lift the weight up because your forearms are in full supination. This contraction, in turn, generates a powerful muscle pump because repeatedly squeezing your biceps over the course of a set creates a huge influx of lactic acid in the muscle.

On the eccentric portion of the rep, however, the preacher Zottman curl places your biceps at a mechanical disadvantage because they're no longer in a supinated position. As a result, they receive less tension on the negative part when compared with regular bicep curls.

So if you want to hone in your biceps and give them the best possible workout, then there are definitely more optimal exercises out there. For example, you can use the Hammer Strength preacher curl bench if you want to isolate the biceps brachii.

Great for the brachioradialis

Since you have to perform part of the Zottman preacher curl with an overhand grip, the brachioradialis muscle is highly engaged as you lower the weight. This is because the biceps can't contract as effectively when you're curling with a palms-down grip. [1]

Therefore, if you want to work your biceps and forearms simultaneously, preacher Zottman curls are a great choice.

The only downside is that the movement isn't really optimal for either one of these muscles.

For example, if you want to maximize your brachioradialis activation, then you'd perform the full curl with an overhand grip. Likewise, if you wanted to blast your biceps, then using an underhand grip for the entirety of the set would be more optimal.

Still, if you're not fussed about finding the theoretically optimal exercise for each muscle group, then Zottman preacher curls definitely offer some of the best bang for your buck when it comes to building your arms.

Many lifters perform far too many exercises for their arms (and especially for their biceps). This is understandable because the arms are a highly visible body part that can catch people's attention.

However, if you're prioritizing exercise variety at the expense of proven muscle-building principles like progressive overload, then you're actually doing yourself a disservice—one which you probably don't even realize.

Let me explain. If you know that you still have 10 more sets to perform, then there's a good chance that you're going to hold back on your upcoming sets so that you have enough energy to finish your workout.

Well, not only does this practice lead to lower bicep stimulation (maximum muscle fiber recruitment requires that you train pretty close to failure), but it also makes it harder to increase your strength.

While you can certainly maintain your muscle mass by lifting the same weight for weeks on end, if you want to gain new size, then you're going to have to increase the poundage sooner or later. [2] In the final analysis, your best bet is to perform fewer exercises and sets while at the same time focusing on increasing the resistance while maintaining good form.

How does this apply to preacher Zottman curls?

Zottman preacher curls work a wider variety of muscles than the typical bicep drill. As a result, you can get away with doing fewer exercises, which in turn means that you can focus on increasing the resistance. Ultimately, this leads to better arm development because you're actually increasing the thickness of your muscle fibers—by gaining strength—rather than just doing endless sets with lightweight, which don't really stimulate any new growth past a certain point.

Conclusion: Should you do the Zottman curl on a preacher bench?

While movements such as the cable Zottman curl provide constant tension and an arguably better pump, the Zottman preacher curl is a superior exercise for beginners because the pad helps you to maintain the proper form.

In this sense, the exercise is also ideal for bodybuilders because the pad makes it easy to isolate your arm muscles. To say it another way, the preacher pad and its accompanying seat prevent you from taking tension off the target muscles by swinging the bar up with your shoulders, back, and legs.

Stick to moderate reps (8-15) so that you can focus on training these small muscles—biceps, brachialis, brachioradialis—with the optimal form and enough time under tension for them to grow bigger and stronger.