Discover the 4 pros and cons of reverse preacher curls. 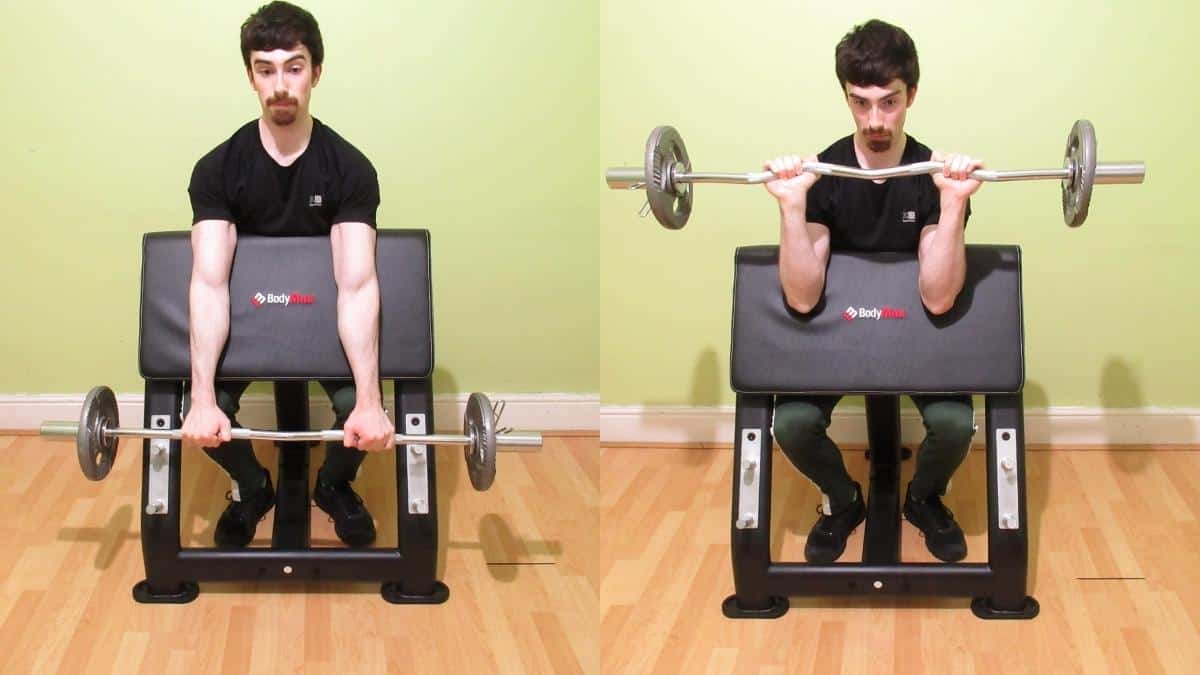 The reverse preacher curl is really good exercise for building your biceps muscles, brachialis, and brachioradialis. While you'll need to lift less weight than you would during a traditional seated preacher curl, the reverse grip preacher curl is a fantastic movement for developing thick forearms.

This step-by-step tutorial shows you how to perform reverse preacher curls with the optimal arm-building form. We'll then discuss the pros and cons of doing reverse curls on the preacher bench so that you can decide whether the exercise is right for you and your goals.

How to do reverse preacher curls

You can do the reverse preacher curl standing up or sitting down; with dumbbells or an EZ bar, fixed bars or Olympic bars. The technique is exactly the same for each variation.

Performing sitting reverse dumbbell curls over a preacher pad is a great way to add thickness to your brachioradialis muscles because the movement places your biceps at a mechanical disadvantage. However, there are also a few drawbacks that you need to consider before making preacher reverse curls part of your arm routine.

Pro: Excellent for the forearms

The preacher reverse curl primarily works the brachioradialis, which is the long, thick forearm muscle that visually connects your upper and lower arms. Many lifters have lagging brachioradialis muscles because they perform far more biceps curls than reverse curls.

As you've probably guessed, neglecting your brachioradialis is a mistake.

Not only does this pitfall lead to unsymmetrical arms, but it can also make you weaker at curls because by having a lagging arm muscle—in this case, the brachioradialis—you also have a clear weak link in the chain that can't keep up with the strength of your biceps.

As a result, you'll have to lift lighter weights until your forearms catch up with your biceps, which means that you'll be leaving bicep growth on the table.

This is why we always include reverse curls in our bicep workouts for ladies and men who want to achieve optimal arm development. You just can't underestimate the power of the brachioradialis for improving your physique.

Con: Mediocre for the biceps

As we just learned, the preacher barbell reverse curl is a tremendous exercise for building the forearms. However, it's a mediocre movement for building defined biceps because it puts them at a mechanical disadvantage.

This means that your biceps can't produce the same amount of force as they otherwise could if you were curling with your palms up. Therefore, you'll have to lift lighter than on supinated exercises like wide grip preacher curls or close grip preacher curls.

While this makes overhand preacher curls sub-optimal for bicep development, it's actually a good thing if you have lagging forearms because your biceps—even if they're way stronger than your brachioradialis—simply won't be able to dominate the movement due to their natural biomechanical disadvantage in pronated preacher curls. [1]

As a result, your brachioradialis will receive the majority of the tension.

You can also do reverse cable curls if you have access to a gym and want to try an exercise that gives your arms more consistent resistance. The preacher reverse curl is a great drill, but it provides a relatively poor bicep contraction compared to the muscle stretch that it produces as you lock your elbows out.

Pro: Great for the brachialis

Like the brachioradialis, the brachialis is a powerful elbow flexor that becomes more active when the biceps are placed at a mechanical disadvantage. [2]

The reverse grip preacher curl is a brilliant brachialis building exercise because it renders your biceps unable to achieve a full contraction. As a result, your brachialis has to pick up the slack and do the work that the biceps aren't capable of performing due to the overhand grip.

A handy little tip here is to use high reps and slower lifting tempos if you want to focus on your brachialis. The brachialis is a slow-twitch muscle, and these types of muscles naturally respond best to higher training volumes, higher repetitions, and slower rep tempos.

If you train like this and have the dietary discipline to match, then you'll develop more peaked biceps because the brachialis helps to push the biceps out, which in turn makes your arms look thicker.

See our guide on how to workout your lower biceps if you want to ensure that you're training all the regions of your biceps and arms.

Con: Need to use less weight

You can typically lift slightly more weight on the reverse preacher curl than you can on spider reverse curls. However, you'll still have to use a lighter load than you would on regular preacher curls.

As mentioned, this is because the preacher barbell reverse curl places your biceps at a mechanical disadvantage. This fact of biomechanics means that your biceps are unable to produce a significant amount of force during the exercise because they're not fully supinated.

Ultimately, if you don't have a problem with ego lifting and understand that preacher reverse curls are an isolation exercise, then you won't have any trouble keeping the tension on the target muscles.

However, if you often get tempted to lift excessively heavy weights, then make sure to think about getting a full stretch (elbows locked out) and a complete contraction as you perform every rep. This way, you'll be ingraining the correct movement pattern into your brain, which, over time, will help to correct any kind of sloppy technique that you might have picked up over the years.

Conclusion: Is the reverse grip preacher curl worth performing?

As mentioned in our female back and bicep workout guide, reverse preacher curls are a worthwhile arm exercise for anyone seeking better brachioradialis and brachialis development. While the reverse preacher curl alone is unlikely to build show-winning biceps, the movement is indispensable for sculpting proportional arm muscles because, as mentioned, most lifters have mediocre brachioradialis development compared to that of their biceps.

It's recommended to stick to high reps (12-20) on the reverse grip preacher curl if you want to target your brachialis because that muscle is composed of slow-twitch fibers primarily.

On the other hand, using moderate reps (8-12) is your best bet if you're focusing on your forearms because, as a powerful elbow flexor, the brachioradialis is a fast-twitch dominant muscle.

To get the best of both worlds, start by performing low rep reverse grip preacher curls when you have the most strength. Then, do a few sets of higher repetitions to burn out your brachialis.