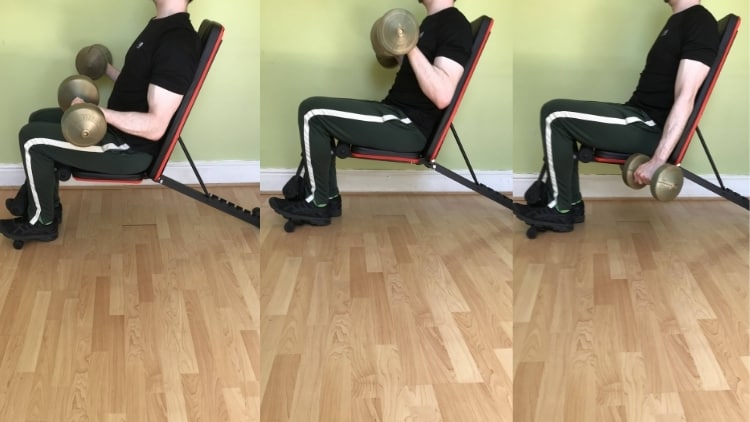 We've spoken many times about the biceps brachii origin and insertion at the coracoid process of the scapula and at the supraglenoid tubercle and how it can affect muscle recruitment on different exercises such as the Zottman curl.

However, even with the scientific facts in front of their faces, many lifters still use improper form by swinging the weights up with their back, shoulders, and legs.

This is where seated curls come in handy. Unlike the standard version of the exercise, the seated Zottman curl stabilizes your backs, legs, and hips against the bench, which makes it much easier to keep the tension on the target muscles since you can't swing the weights up as effectively.

How to perform seated Zottman curls

Performing Zottman curls sitting down definitely has its advantages over exercises like cable Zottman curls, which can be very tricky to execute correctly. So here are a few reasons why you should consider doing seated Zottman curls rather than the regular version.

You can also check out our seated curls vs standing curls debate if you want to learn more about the pros and cons of doing Zottman curls in a sitting position.

Many lifters have a tendency to cheat the dumbbells up with their back, legs, hips, and shoulders in an attempt to lift more weight. Some gym-goers do this purely to show off, while others do it because they believe that cheating will enable them to overload their arms with more resistance.

While it's true that turning the Zottman curl into a full-body movement will indeed enable you to lift heavier poundages, that extra resistance won't all go to your biceps and brachioradialis. Rather, it will mostly get distributed to your legs and back, which completely defeats the purpose of this isolation exercise.

So, in the end, swinging the weights up does nothing extra for your biceps, but it may put excessive strain on your spine and knees, which could cause injuries if you keep the bad habit up. [1]

The solution is the seated Zottman curl. While it's still possible to swing the weights up with your shoulders even while you're sitting down, you can't use your back, legs, or hips to generate momentum because they're all stabilized by the bench. As such, it's much easier to avoid ego lifting and thus keep tension on the target muscles, which is to say on the biceps, brachialis, and brachioradialis.

Not only will the sitting position benefit bodybuilders who want to maximally isolate their muscles, but it'll also help beginners who are still learning the correct technique. This is simply because, as we just established, there's less room for error when you do Zottman curls while sitting down.

Many weight lifting enthusiasts have a decent bicep size but comparatively worse brachioradialis and brachialis development. Of course, if these folk simply stopped curling, then their arms would look more symmetrical. But who's going to do that?

Most of us don't work hard in the gym to then give up our gains in pursuit of more proportional arms.

The way around this symmetry issue is to incorporate more exercises like the preacher Zottman curl or the seated Zottman curl into your training. This way, you still get the bicep stimulation that you need for muscle maintenance, but you also get the heavy eccentric overloading for your brachioradialis and brachialis that's necessary to spark new growth.

Just make sure to really emphasize the eccentric portion of the rep in order to get the best results. You want to lift explosively during the concentric phase, but as you lower the weight, you want every fiber of your brachioradialis and brachialis muscles to feel the tension, which is why slow negatives (3-5 seconds) are a great way to stimulate new size gains. [2]

Are seated Zottman curls worth your while?

The seated Zottman curl is similar to sitting reverse dumbbell curls in that both movements minimize cheating, and both exercises train the brachialis and brachioradialis muscles more optimally than regular curls.

Therefore, if you have dominant biceps but comparatively weaker arm development elsewhere, then seated Zottman curls can help you to build a more proportional physique if you perform them with the proper form.