Here's what the research has to say about lower arm size. 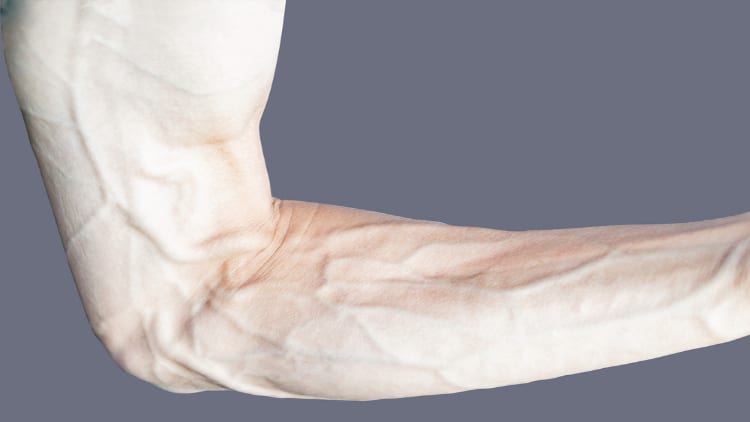 Everyone who lifts wants big forearms. In a world where biceps have become the new skinny boy’s six-pack, a large forearm circumference is what separates the men from the boys. The question is, are your 13 inch forearms really that impressive?

See how you stack up:

How impressive are 13 inch forearms?

The research is clear. If you have 13 inch forearms, then your size is well above average, which is right around 9.5” for women and 11 inches for men. [1] The catch is that many people who’re into training like to measure their forearm anatomy while it’s flexed.

Always measure your forearms in the same state so that you can track your gains accurately.

While it might stroke your ego to see the tape measure budge another half-inch, it won’t do anything for increasing your actual forearm muscle mass. You see, in research, girth measurements are always taken unflexed (yes, even in sports science studies).

As such, you might not really have 13 inch forearms. Heck, when you measure your forearms relaxed and cold, you might be in for a shock. For example, a study of Japanese men found that the average forearm girth was just 9.96 inches. [2]

Now, to be fair, the men were 70+ years old and had an average bodyweight of just 62kg (136lbs). So it’s not as if they were trying to make their forearms jacked.

Still, this study shows just how impressive genuine, unflexed 13 inch forearms really are. It shows either a measure of dedication in the training department or just flat out great genetics. And since we can’t all rely on grade A genes to get huge, I’m going to give you 4 test-backed tips for growing and exceeding your 13” forearms naturally.

How to get 13 inch forearms naturally

Well-developed forearm extensors always grab my attention because of the incredible muscle definition they’re often accompanied with. However, it’s the flexors on the anterior forearm that contribute the most mass to your lower arms.

Therefore, you need to prioritize flexion movements if you want to rid yourself of puny forearms.

Think wrist curls and hand grip squeezers. Although, really, any exercise that works the underside of your forearm (like heavy rows) can still add some serious mass with enough consistency on your end.

For me, it’s definitely the extra time it sucks from your day. After a long back or leg workout, the last thing I want to do is kneel over a bench and fight against the forearm lactic acid demons as I pump out high rep wrist curls.

That’s where hand grippers come in.

Not only are grip trainers ultra-convenient, but they’re also much easier on the wrists than traditional forearm curls. Plus, if you can close genuinely heavy grippers, then there are no two ways about it; you’re going to have better forearm development than 99% of lifters—bodybuilders included.

Have you ever seen an arm wrestler with puny forearms?

In other words, the two aren’t mutually exclusive. If someone has big forearms, then you can bet your bottom dollar that their lower arms are also as strong as an ox. And if you don’t believe me, then you can shake their hand to find out for yourself!

But you’d be surprised at just how many guys with toothpick forearms think sipping diet whey protein is enough to gain mass.

By gaining some weight and increasing your body fat as well as your muscle mass, you’ll feel stronger in the gym. Plus, most people’s arms stay relativity lean even when their abs have faded, enabling them to look large without sacrificing their upper body aesthetics.

How long will it take to get 13 inch forearms?

Many factors such as your genetics, dedication, and diet will influence how fast you can achieve (and then exceed) 13 inch forearms. However, the biggest factor that you can control is your training.

It’s clear to me that those who focus specifically on grip strength have bigger forearms than those who do endless sets of wrist curls. So if you want those coveted unflexed 13 inch forearms, then you’d do a good job to put down the dumbbells and pick up the hand gripper.

Presuming that you make grip training a priority in your workout routine, then someone with average to good genetics can achieve 13” forearms in 1-2 years. If you decide to pursue instant gratification and chase the pump, then you might never add any real mass to your forearms. Instead, you’ll just temporarily inflate what you already have.

Getting 13 inch forearms without hitting the gym is possible if you have a large frame. It’s also quite possible for those who perform manual labor for a living.

However, outside of the obese and gym-going populations, 13 inch forearms are quite a rarity—especially since most people work on computers rather than with their hands these days.

My parting advice for getting 13 inch forearms is this: don’t focus on vanity exercises. Stick to the more traditional grip strength exercises (or pick up a hammer and do some work), and you’ll max out your forearm genetic potential sooner than you think.

James Jackson
James Jackson is a personal trainer who uses his expertise in strength and conditioning to create helpful workout tutorials that show fitness enthusiasts how to build muscle while staying safe in the gym. He draws on the latest sports science data as well as tried and tested training techniques to get the best results for his clients without them having to live in the gym.
View All Posts
Forearm Exercises

Behind the Back Wrist Curl

Best forearm exercises and workout routines for mass and strength

How to get bigger forearms fast: Here's our massive guide to building ripped lower arms

Forearm stretches to relieve pain and tightness: Learn how to stretch your forearm properly