Discover if you're genetically capable of getting 16" forearms as a natty. 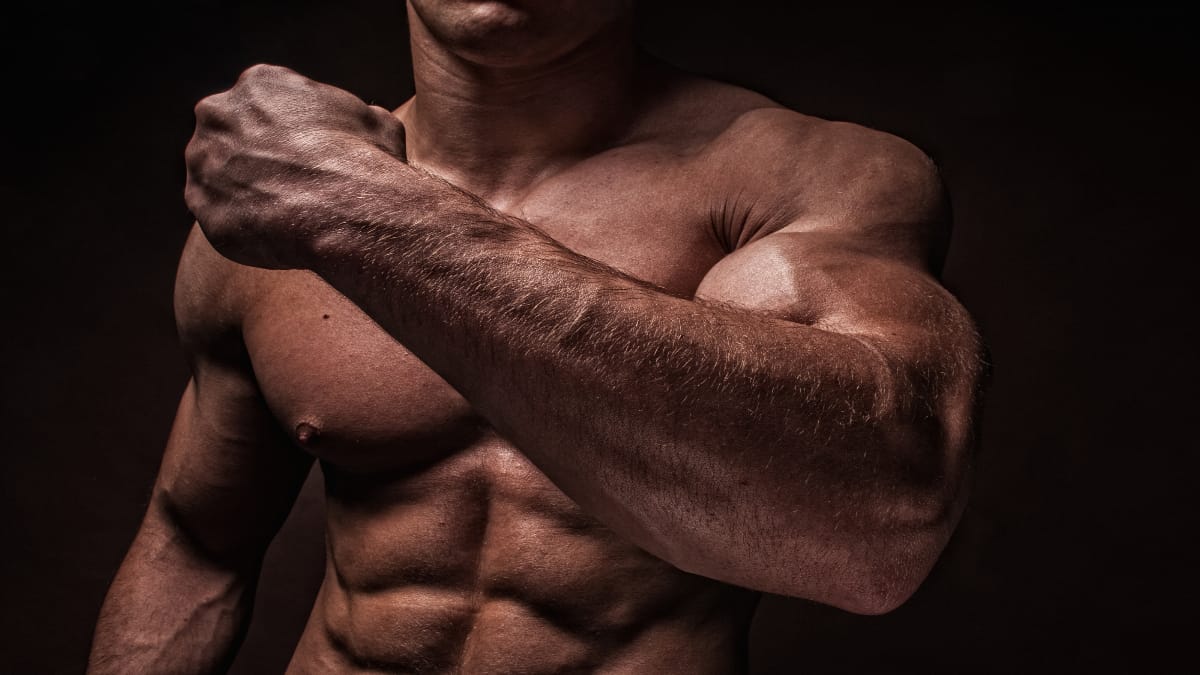 We all know someone—many people, perhaps—who have 16 inch upper arms. But how many natural lifters do you know who have genuine, unflexed 16 inch forearms?

I, for one, don’t know any. And that’s not just because we live in a biceps and abs-obsessed world. It’s because building huge forearms takes a certain measure of genetic ability. Yet, it also requires a highly specific approach that few bodybuilders are willing to take.

So, let’s answer the burning questions. Can you really get a 16 inch forearm measurement naturally? And if so, how on earth do you achieve it?

This forearm guide and the ones below will tell you the truth.

Just how spectacular are 16 inch forearms?

Just to be consistent in this “measurement” article series, I’m talking specifically about unflexed or relaxed forearm size. That’s not to say that 16 inch flexed forearms aren’t impressive because they most certainly are.

However, it is to say that relaxed forearm size is what matters the most as that’s the state that your arms are in the majority of the time.

Either way, true 16 inch forearms are a sight to behold. Outside of pro bodybuilding and arm wrestling circles, they’re quite a rarity. And you can best believe that if you own a pair, you’re going to get a lot of probing questions from men who realized that big pecs and shredded abs are overrated.

So yes, considering that 16 inch upper arms are considered fairly impressive, 16 inch forearms, whether flexed or relaxed, are just about the most imposing sight in the gym.

Can you get 16 inch forearms naturally?

I won’t lie to you; it’s highly likely that you don’t have the genetics (or the care) to get 16 inch forearms. I certainly don’t, and there’s no shame in that. Plus, even if you do have the necessary genes, is it really worth the years of narcissistic labor?—the endless training with the only goal of getting bigger muscles and/or a stronger grip.

But that doesn’t mean that building 16 inch forearms is impossible, or even a bad idea, for that matter.

All else being equal, a larger frame results in larger forearms.

If you’re six and a half foot tall and have wrists that require bespoke watch straps, then you might actually be able to build 16 inch forearms without living in the gym. In other words, the growth will happen as a natural side effect of your resistance training.

You see, more bone can support more muscle. So it follows that if you have well above the average bone mass, then you can also achieve well above average levels of muscle mass. And luckily for our hypothetical lifter here, this benefit carries over the forearms, too.

But if you aren’t gifted with strongman genetics, then you can implement these 6 mass-building tips to get yourself on the road to natural 16 inch forearms or the closest size that your genetics will allow.

Be honest with yourself. Do you have the bone structure to get 16 inch forearms the traditional way? You know, via compound lifts and a few sets of wrist curls when you can be bothered?

Most likely, the answer is no.

As such, you need to be very deliberate about your forearm training if you want them to grow.

The good news is that all else being equal, 16 inch forearms will look more impressive on a smaller frame because more of the circumference will be comprised of muscle mass rather than other body tissue like bone.

When you’re drinking that anabolic muscle juice, you can do virtually anything in the gym and still build a ton of muscle. Heck, one study found that sedentary, roided up lifters gained more size than resistance training natties.

In other words, don’t listen to the meatheads when it comes to building your forearms.

Because of their special supplements, their wrist joints can take more of a beating, which is why many pro bodybuilders can get away with such shocking form.

Also, never use a partial range of motion (ROM) in your forearm workouts unless it’s for burnout purposes. Again, bodybuilders can grow from half rep training because the chemical assistance is doing most of the work for them—you can’t.

While it's important to avoid overstretching your muscles, you should never perform partial reps unless it's as a finisher. Always get a full range of motion for the fastest gains.

Instead, train all the forearm muscles. And do the exercises that bodybuilders aren’t willing to do (and which they’ve probably never heard of). In practice, this means doing various exercises that tax the grip, [1] such as wrist curls with a thick bar or by wrist curling the end of a traditional barbell while it’s in the t-bar row holder in the corner of the gym.

Ultimately, if you train all the forearm functions, then you won’t leave any potential growth on the table. Forearm curls have their place, and with a few modifications, they certainly do contribute a lot of mass to the flexors. But on their own, they’ll leave you with very lopsided-looking forearms. So train those extensors too!

Picking up a random fixed barbell and smashing out two sets of wrist curls after an arm workout isn’t enough to build the forearms of your dreams. You need to train your forearms like you would your legs, chest, or any other body part, if you want to get them over the 16 inch line.

And yes, this means making yourself uncomfortable.

The lactic acid might feel unbearable, but it’s nowhere near as bad as having toothpick forearms. Those timed barbell holds might seem like a cruel punishment at the time, but when you have the strongest grip in your gym, your barbarian training will suddenly seem worth it.

Also, when I say train like an animal, I’m strongly hinting at ditching traditional wrist curls in favor of grip strength and arm-wrestling-specific exercises. Compared to the average natural bodybuilder, arm wrestlers and amateur strongmen have much stronger grips and way bigger forearms.

And that’s because they realize that the forearms respond best to more primal exercises that rely on grip strength—not just your ability to pump out endless sets of 8-12 reps with modern, convenient dumbbells.

You wouldn’t believe it the way that many people train their forearms, but the wrist is a very small and delicate joint. Forearm curls, while an effective mass builder, can wreck your wrists if you’re not careful.

And guess what that means?

No forearm growth. Heck, you won’t even be able to train your upper body if the injury is severe enough.

The best way to avoid wrist injuries is to, first and foremost, keep your form in check. Don’t just let the weight drop—control it and use your muscles to lower the equipment rather than letting the resistance bounce off your tendons and ligaments.

Also, don’t go crazy on the training volume. If you’re lifting close to failure, then it doesn’t take many sets to elicit some really good growth. Plus, it’s always better to focus on quality sets rather than endless pump work. Get strong at the basics for a few sets, and the results will take care of themselves until you become really advanced and actually have a physiological need for the extra volume. [2]

Tone down your biceps training

I like curling as much as the next guy. But unlike the average gym bro, I understand that with intense training, you don’t need more than a few hard sets to get maximum gains.

More specifically for building those 16 inch forearms, don’t do too much bicep work because your forearm flexors might be too tired to handle heavy weight within your direct forearm training.

The number one rule of building gigantic forearms is this: when in doubt, ask an arm wrestler.

Like bodybuilders, arm wrestlers do wrist curls. However, they do more optimal variations that help them to recruit extra muscle fibers while avoiding injuries. Take note, fellas, take note.

How long does growing 16 inch forearms take for naturals?

I hate to say it, but it depends on your genetics. If you’re a future World’s Strongest Man competitor, then it might only take 18 months of solid training to get those 16 inch forearms.

But if you have less anabolic genetics, then you might be looking at 5+ years, if at all.

While 16 inch forearms are a rarity among natural lifters, with a big focus on grip strength and the forearms in general, I don’t think that joining the 16 inch club is completely out of the question for folks with average genetics.

Like many things in life, the first step is believing that it’s possible.

The bottom line on getting real 16 inch forearms

Presuming that you’ve got the basics in place—enough protein, calories, and recovery—the only thing standing between you and those 16 inch forearms (besides your genetics) is your training protocol and work ethic.

I hope that this article helped you pick up some good tips on the former. And if you’re still in doubt, I definitely recommend temporarily immersing yourself in the world of arm wrestling.

As for the latter—the work ethic—well, that’s down to you. How much do you want it? And is it worth it for you?

Many times the answer is “no.” Sometimes it’s best to enjoy your training rather than always pursuing some borderline arrogant goal. But that’s just my opinion.