Learn if 14 inch arms and 14.5 inch arms are big for your height and build. 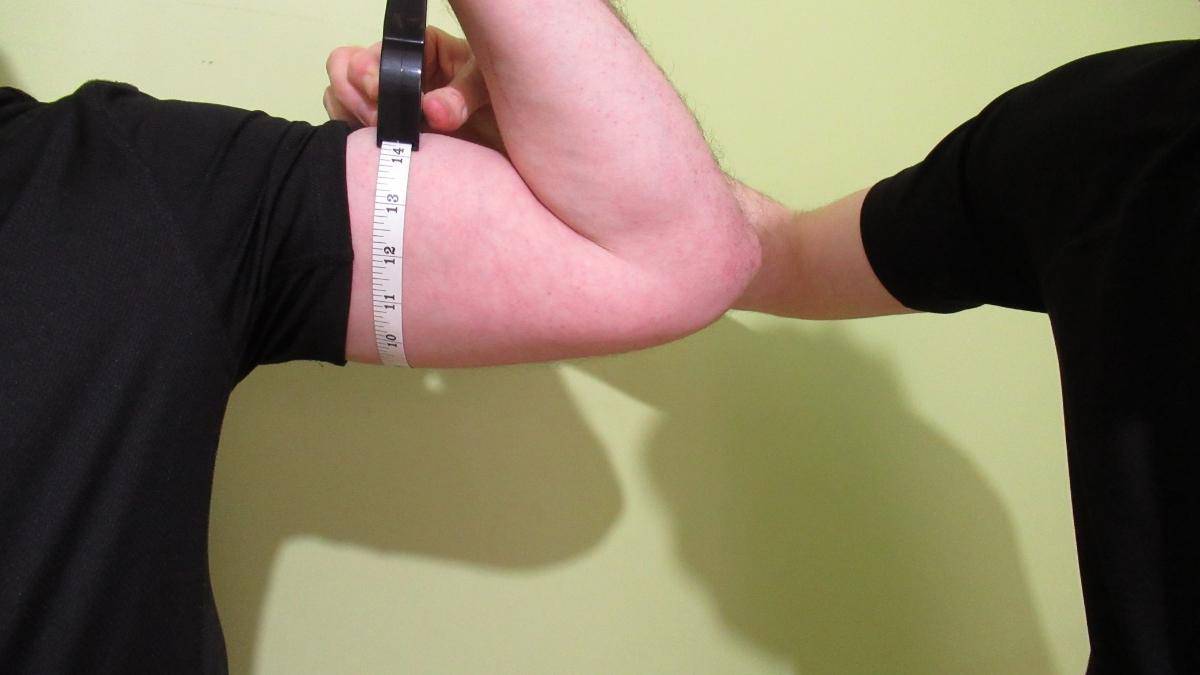 Whether you want to know if 14" arms are good for your particular height or if you wish to build 14.5 inch arms and beyond, we have you covered.

This detailed 14 inch bicep guide uses real-world research and case studies to help you understand how impressive 14" biceps really are for a natural lifter.

See How Your Biceps Compare:

Are 14 inch arms big and muscular for a natural lifter?

Whether or not your 14 inch biceps (roughly 36 cm biceps) are big depends on your height, weight, training experience, and body fat level. So let's use a few practical scenarios to illustrate the point.

If you're 5'7" with a low body fat percentage and excellent muscle definition, then 14 in arms can actually look quite big from the right angle. However, such an arm size is unlikely to look huge unless you're really short (let's say 5'4" and under).

On the other hand, if you're taller, have a higher body fat level (20%+), and still have 14 in biceps, then that measurement isn't very impressive, especially if we're talking about flexed measurements.

That's a point. You should always measure your arms flexed so that your biceps can display their full muscularity, something that they can't do when your arms are just hanging by your sides.

As I alluded to above, whether or not 14.5 inch biceps (or almost any arm size, for that matter) is big and impressive depends on a multitude of factors such as your body fat level and height.

However, 14.5 inch arms are considerably bigger than 14" arms (presuming the same body fat level and height) because we're talking about a full half-inch of solid muscle.

That's no mean feat for a small body part like the arms.

And besides, if you have 14 and a half inch biceps, then you're well on your way to the 15-inch club, which would definitely put you above average if you can keep your body fat down.

Just to be clear, if you're over 6 feet tall, then 14.5" biceps aren't actually that impressive. This is simply because tall people have longer bones [1] and muscle bellies and can therefore build bigger overall arms (even though their arms may not necessarily look bigger due to not being as "filled out").

These 14 inch bicep case studies will give you an insight into what 14 in arms look like at different heights, weights, and body fat levels.

The calisthenics enthusiast who operates the YouTube channel Lifetime_Chronic_Insomniac made a video showing what natural 14 inch arms look like.

Now, before we get into the analysis, it's important to note that his arms have actually grown significantly since his initial video (they're around 14.75 inches at the time of writing).

Additionally, this guy doesn't go to the gym and presumably doesn't do much—if any—biceps and triceps isolation work. He is, however, very strong when it comes to bodyweight movements, something which is evident when you look at his back during his physique updates.

Ok, now on to the analysis. He's 5'11" and weighs around 165 lbs (75kg). It's clear that his arms look a lot bigger when he flexes his triceps (side tricep) than when he flexes his biceps. This could be due to the high volume push-ups that he presumably does as part of his calisthenics training.

If this fella was to perform even a modest amount of bi and tri isolation work with some bands or dumbbells, then he'd likely hit the 16-inch mark pretty soon, which I believe is one of his main physique goals.

Make sure to check out his later videos to learn how you can progress from 14 to 14.5 inch biceps and beyond.

The man who operates the YouTube channel Roy fitness series has 14 in biceps, and they look surprisingly impressive.

His biceps have good vascularity and definition, and they actually look a bit bigger than he claims.

If I was guessing, then I'd say that they're around 14.5 inches.

Although we don't know his height and weight, I'm going to presume that he's relatively short (I'd say 5'8" or under) simply because his arms, despite not being that big in terms of circumference measurement, actually look very impressive.

It would be crazy to think what his arms would look like if he grew them by another couple of inches.

The main behind the YouTube channel AESTHETICALLY made an excellent video where he took all his body measurements, including that of his biceps.

What's interesting is that his arms actually look bigger than they are, which just shows how beneficial having low body fat is when it comes to aesthetics.

It also looks like his biceps are more developed than his triceps. So if he was to bring up his triceps, then his arms could well hit the 15-inch mark in a relatively short space of time.

How to get 14 inch biceps naturally

Learn how to get 14 inch arms flexed (cold) as a natural lifter. It's a lot more straightforward than you might think.

Although such movements certainly help, it's not actually necessary to perform isolation exercises in order to get 14" biceps.

That is, of course, unless you're really short (14 in arms can actually look pretty big if you're under 5'7").

Focusing on compound pulling and pressing exercises—chins, underhand rows, bench presses—can help you pack on arm size while bulking up your torso in the process.

If you're adding weight to the bar on a regular basis, then there's a good chance that your bis and tris are getting bigger as well, especially if your body weight is also increasing. [2]

Performing a combination of compound movements and isolation exercises is the most efficient method for building 14 and 14 1/2 inch biceps.

Just don't make the mistake of doing too much volume on your isolation drills.

If you do too many sets, then you'll struggle to recover. If you can't recover in time, then you won't be able to gain strength, which means that you'll be lifting the same weight for weeks, months, and even years on end. Ultimately, this stagnant strength progress means that your arms won't gain much size.

As you can see, it often pays to stick to the basics when you've still got a lot of muscle left to gain, which you presumably have if you've only got 14" biceps.

If you're struggling to build 14 inch biceps flexed, then perhaps you're not getting enough protein?

Research shows that individuals in a positive energy balance (i.e., in a bulking phase) need between 1.6 g/kg and 2.2 g/kg of protein. [3]

Splitting this protein requirement into 3-4 evenly-spaced meals is your best bet for maximizing absorption and keeping muscle protein synthesis elevated throughout the day.

Curious if 14" arms are good for your particular height? Keep reading to learn how impressive your arms really are for a natural lifter. 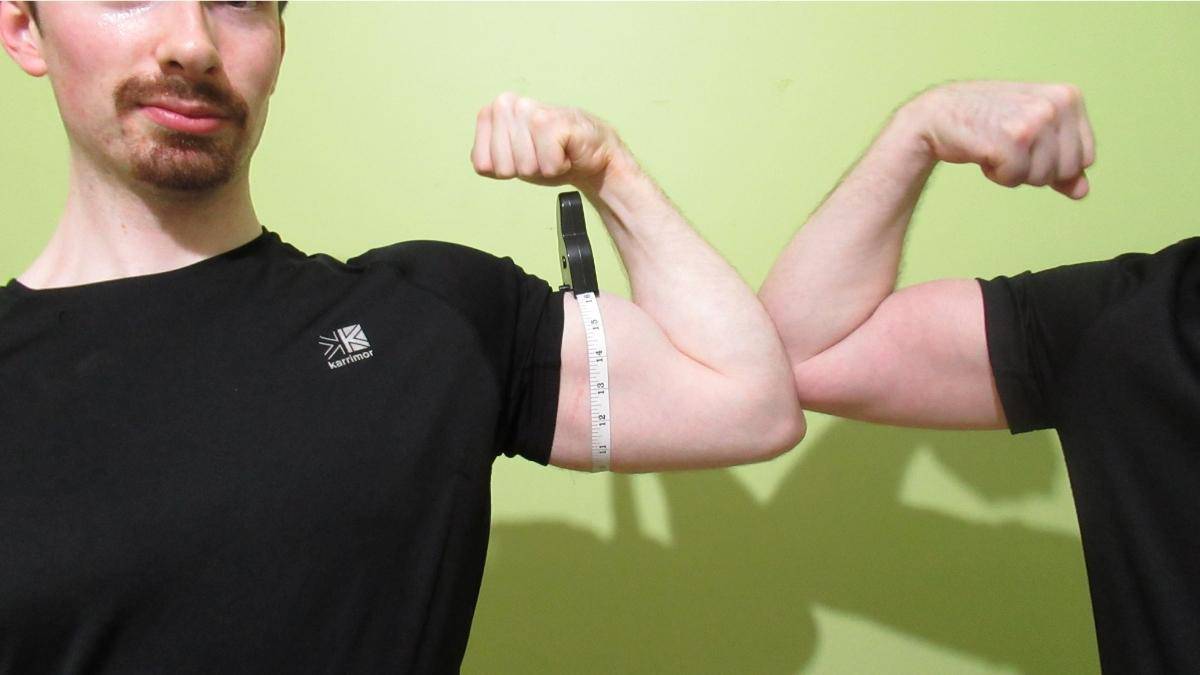 Are 14 inch arms small for someone who lifts weights regularly?

It depends. If you're relatively short (let's say 5' 8" and below) and have very good muscle definition, then no, 14 inch arms aren't small.

However, if you're 5' 10" or more and have poor arm definition, then your 14" inch biceps will likely look quite small and soft.

All of this information, in case it wasn't obvious, is based on flexed measurements. If you have unflexed 14 in biceps with good muscle definition, then that's very impressive. 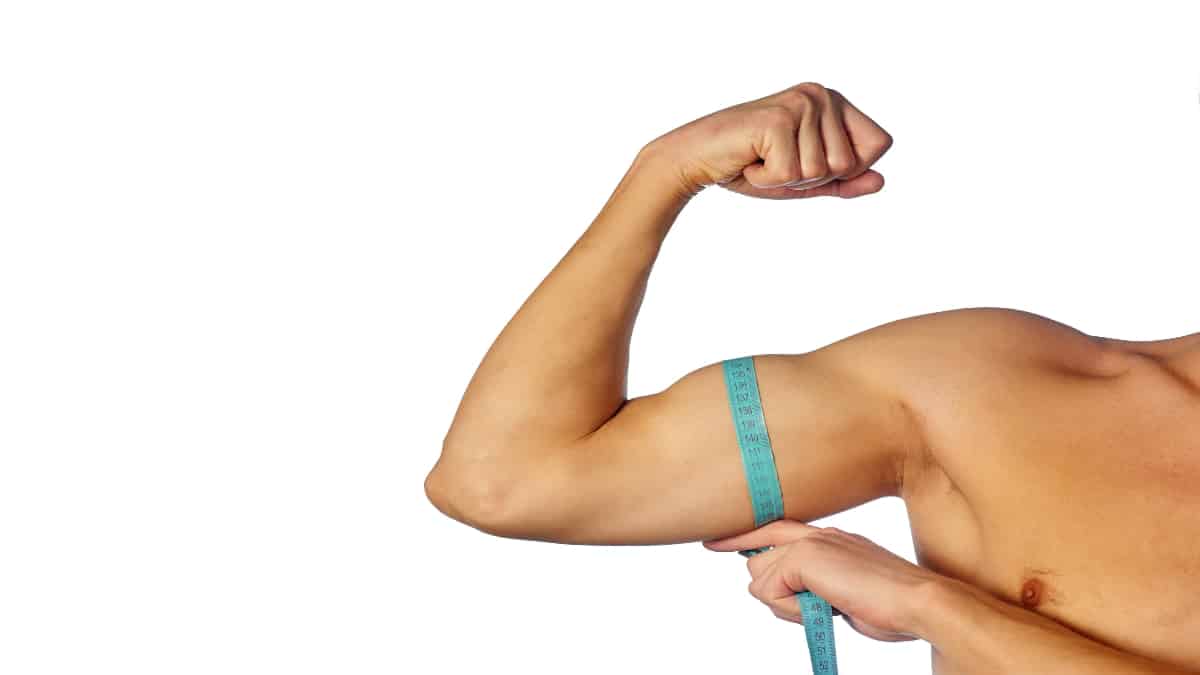 Gaining half an inch of muscle is more challenging than you'd think, especially when it comes to a relatively small body part like the upper arms.

First and foremost, make sure to measure your arms flexed and cold so that you can accurately track your progress.

Second, focus on increasing the weight while maintaining good form. If you can curl or push down more weight for the same number of reps than you could a few months ago, then there's a good chance that you'll get 14.5 inch arms.

Of course, building lean 14.5 inch biceps takes patience and—if you want to get there as efficiently as possible—a calorie surplus too. 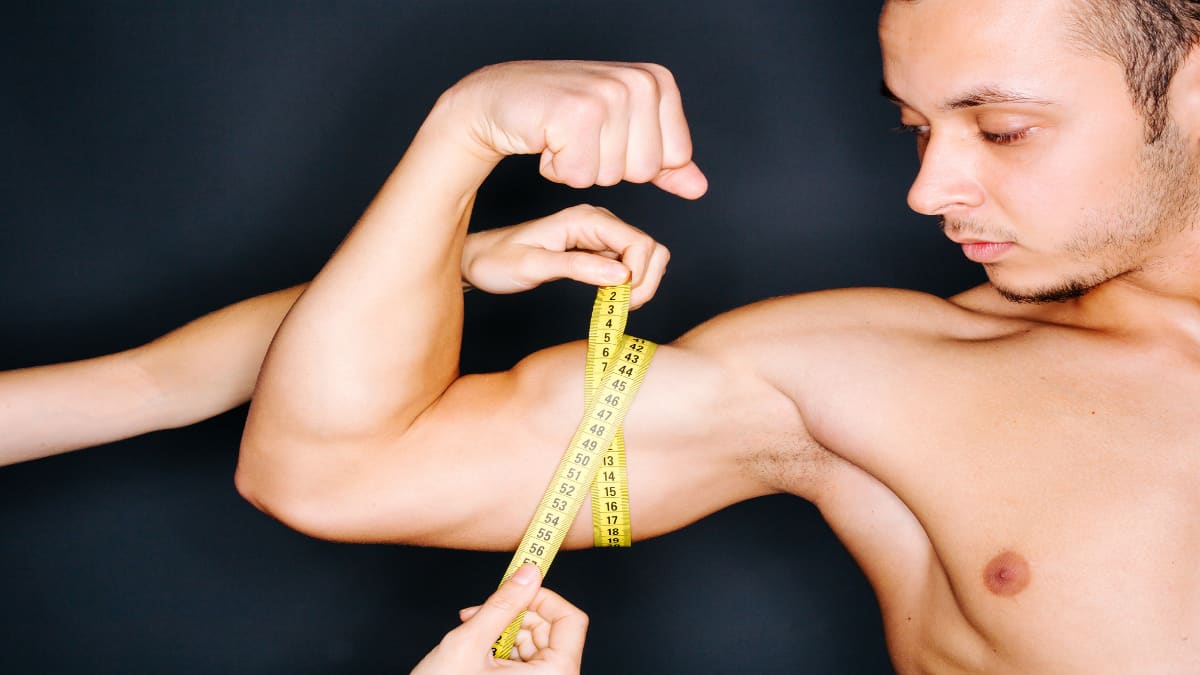 This is because shorter lifters naturally have shorter bones and muscle bellies.

Of course, if you have an excessively high body level, then your 14 in arms won't look very good because the fat will obscure the muscle definition by covering it. 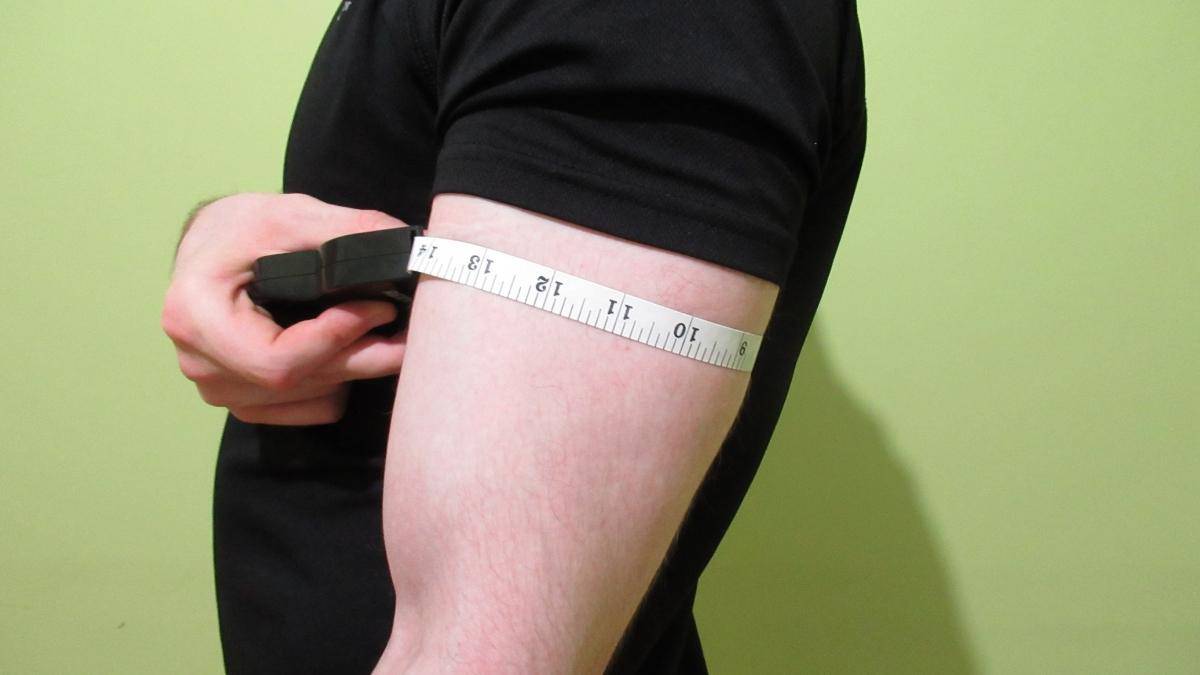 While it's perfectly fine and healthy to have 14 inch biceps at 6 feet, such an arm size certainly isn't big.

Now, if you're absolutely shredded and about to step on a bodybuilding stage, then yes, 14" arms can actually look quite muscular if you're 6 feet tall.

On the other hand, if you have a somewhat normal body fat level, then a 14 inch arm measurement won't look particularly big.

The verdict: Are 14 in biceps impressive for a natural lifter?

So, are 14 inch arms big for a natural lifter who trains their bis and tris regularly?

If you're 5'8" or shorter and have a low body fat level, then yes, 14 inch biceps can absolutely look big. In fact, if you don't have much body fat, then it's entirely possible that you'll actually register a smaller arm measurement than someone else while still having more (lean) bicep and tricep mass.

Conversely, if you're over 5'10" and can't see much definition when you flex your biceps, then your 14 in arms will likely need at least another inch of mass in order to look big and muscular.