Are 18 inch biceps big? Learn how to get 18 inch arms naturally

Do these 3 bicep case studies prove that you can get 18 inch arms naturally? 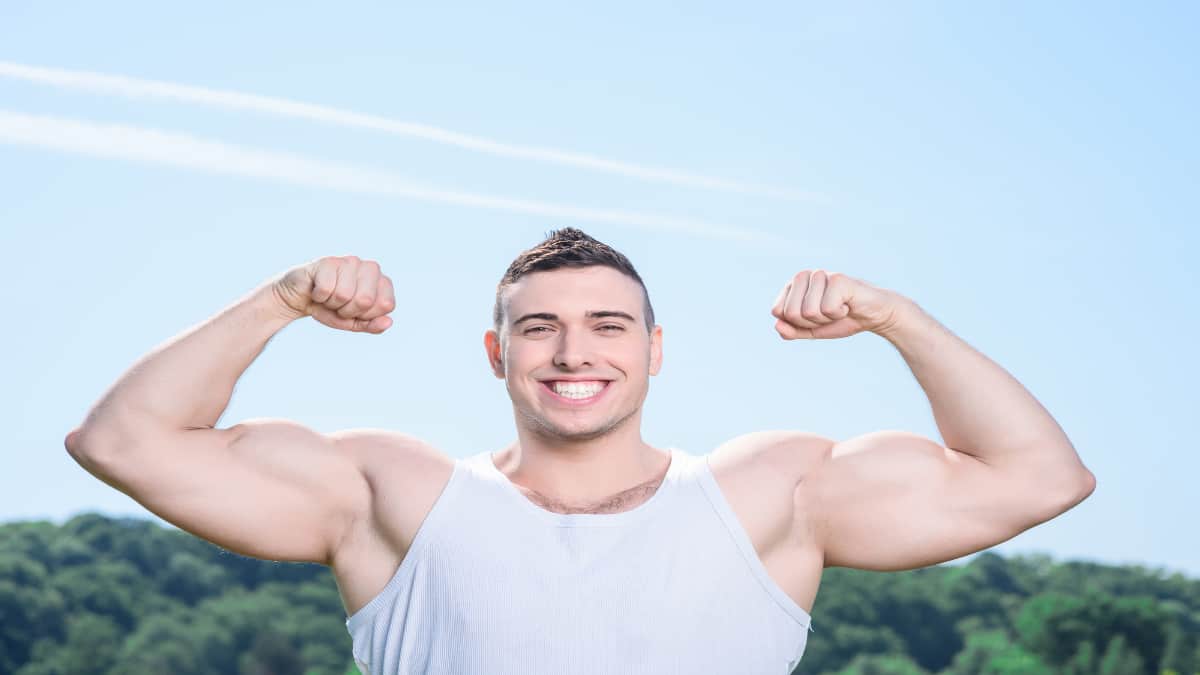 One thing's for sure, 18 inch arms are far from being an average bicep size. However, can a natural lifter really expect to build 18 inch biceps through diet and training alone?

Additionally, is having an 18 inch bicep circumference all that impressive if you've got a high body fat percentage?

Using real-life case studies and years of strength training experience, we set out to answer those questions once and for all.

So let's find out if you can realistically expect to grow 18" arms at your particular height, weight, build, and body fat level.

See How You Stack Up:

Yes, 18" arms are very big indeed and are approximately 5 inches larger than average. [1] Even if your 18 inch arms aren't particularly muscular, then they're still big due to their massive circumference measurement.

As for how impressive 18" biceps (45 cm biceps) are, that depends on your height, weight, body fat level, and measurement state.

If, for example, you're 6'7", 25% body fat, and measure your arms pumped, then your 18 in biceps are definitely big, but they're unlikely to look impressive or aesthetic.

On the other hand, if you're a more typical height—let's say between 5'9" and 6'2"—and you have a relatively low body fat level, then your 18 in arms will look much more impressive than those of the really tall guy.

Yes, 18.5 inch biceps are extremely impressive if most of that size consists of muscle mass. The vast majority of lifters will never have 18.5 inch arms pumped, so you can count yourself well above average if you genuinely have 18.5" biceps as a natural lifter.

What you might not realize, however, is that it can be incredibly challenging to go from 18" arms to 18.5" arms as a natural. This is because it's hard for the body to produce half an inch of pure arm mass when your biceps and triceps are already massive.

So while there's not much difference between the two measurements, it's disproportionately harder to go from 18 inch to 18.5 inch arms than it is to go from 12 to 12.5 inches, for example.

Of course, if you have 18" biceps cold and want to get to 18.5", then you could just take a pumped measurement to get a temporary size boost. Just be warned, though; you might actually exceed the 18.5-inch mark if you pump up your arms too much!

Can women get 18 inch biceps?

Yes, it's possible for females to get 18 inch arms naturally. Now, am I talking about lean 18 inch biceps here?

No. Most women simply don't have the frame size to have arms that big.

The only women who are capable of developing 18 in arms naturally are ladies who are obese. This is because it's far easier for the body to store fat than build new muscle tissue.

Additionally, women tend to store much more body fat on their arms than men. [2]

The only other women who might theoretically be able to build 18 inch arms are large-framed professional female bodybuilders.

And even then, such an arm size is extremely rare in the real world because pro bodybuilders generally maintain a very low body fat percentage for their competitions.

How to get 18 inch arms naturally

If you want to get an 18 inch arm circumference as a natural lifter, make sure to take note of these proven arm-building tips.

The bodybuilders with the best bicep and tricep development all perform direct arm training. In other words, they don't just rely on rows, chins, and presses to build their arms.

Of course, you should do heavy compound movements as well in order to develop your other muscles (chest, back, quads, etc.).

However, such exercises are no match for curls, extensions, and pushdowns because the arms aren't the limiting factor, meaning that the biceps and triceps rarely reach muscular failure during compound lifts (except maybe in chin-ups and close grip bench presses).

If you want to sculpt 18 or 18.5 inch biceps naturally, your best bet is to perform both heavy and light exercises for your arms.

The first session could revolve around heavy exercises, such as barbell curls and lying extensions, that are conducive to progressive overload. If you're gaining strength over the weeks and months while also eating in a calorie surplus, then there's a good chance that your arms are growing as well.

These slow-twitch fibers respond exceptionally well to slow-negatives, high reps, and a high amount of training volume. So don't be afraid to hit the weights hard and make the best use of that calorie surplus.

Eat in a calorie surplus

While it's possible to get nicely toned arms without bulking, building eighteen inch biceps, unless you're extremely tall, necessitates eating in a sizable calorie surplus.

Experts recommend multiplying your body weight by 20 to get your starting calorie surplus. [3] And if that number leads to steady weight gain and progressive circumference increases, then great.

If not, you'll need to increase your calories further still to compensate for what is likely either your fast metabolism or high activity level.

There are some excellent bulking calculators online that enable you to factor in your activity level and desired mass-gain aggressiveness. [4]

Tweaking the numbers will help you to stay lean if you can't stand the thought of gaining excess fat. Yet, getting specific will also enable you to add mass at a faster rate if you've still got a lot of muscle mass left to gain.

If you already have good arm development and just want to be able to say that you've got 18 inch biceps, then go ahead and take a pumped measurement.

Sure, your measurement will go back down once you lose your pump. Still, it can be highly motivating to see the tape measure stretch to 18 inches after you've just performed an intense arm session.

While it's recommended to take a cold measurement most of the time, seeing how big your arms are when they're pumped lets you calculate the difference between your cold and pumped measurements.

You can then see how effective a particular workout is for inducing an intense bicep and tricep pump.

Have the right genetics

Let's be honest, getting 18" biceps is a lot easier if you have genetics that are conducive to gaining muscle size.

Being tall is the most obvious example. If you're 6'4" or taller, then you're naturally going to have very long arm bones. This means that your bones can hold a larger amount of muscle tissue than those of someone who's only 5'9". [5]

The catch is that at an equivalent arm size, the short guy's arms will always look bigger because they're more filled out and developed in relation to his genetic muscular potential.

Additionally, it's possible that you might be of a somewhat average height but just be blessed with excellent muscle-building genetics (something that can make it difficult for people to believe that you're natural).

If you're not extremely tall or genetically blessed, however, then don't lose hope. You can still build 18" arms via years of consistent training if you're willing to bulk up to a higher body fat percentage (around 20%).

Steve Shaw is 5'10" and has been lifting hard and heavy for decades. His arms measure just under 18 inches flexed and cold, which, as he notes, is about as big as most normal-framed natties can hope to grow their arms.

While his arms don't look pro-bodybuilder-level shredded, they clearly have good definition and separation.

Obviously, most lifters aren't going to get 18 inch arms naturally unless they're willing to gain some fat in the process. It's actually very common for people with 18" biceps to dramatically underestimate their body fat level for ego reasons or just because of a general lack of bodybuilding knowledge.

The man behind the YouTube channel Solidrev stands 6'6" and has flexed 18 in biceps. Now ask yourself, do his arms look as big as Steve Shaw's?

No, they don't (although they both appear to have a similar body fat level).

This comparison just shows that, in addition to your body fat, your height and bone length are the biggest determinants of your genetic arm potential.

Lee Hayward runs the YouTube channel Total Fitness Bodybuilding and has decades of training experience under his belt.

He's just under 5'7" and he made a video a while back showing that his arms measure 18 inches with a pump.

And I have to say; I'd believe every inch of that measurement even if he didn't verify it with his tape measure—his arms look huge.

Notably, his arms are now bigger than when he was at a much higher body fat level. That just goes to show the results-producing power of consistency.

So many lifters give up on training after a few years, but Lee Hayward is an excellent case of how perseverance pays off in gains.

Yes, his measurement was taken pumped, but it's clear that he's got an incredible amount of arm mass for a man of his height (and for a man in general).

The verdict: Can you get 18 inch arms naturally?

Whether or not you can build 18 inch arms as a natural lifter depends on your genetics and commitment level.

If you're 6'6" with long arm bones, then you can probably build 18 inch biceps with a basic strength training program and a relatively normal diet.

On the other hand, if you're 6 ft tall or 5'9", then, even though you're not short, you're still going to have to bulk up to a higher body fat level in order to have 18" arms because your bones aren't as long.

If you’re really short, however, then it's unlikely that you'll be able to develop 18 or 18.5 inch biceps as a natural lifter because you simply don't have the bone mass to support that much bicep and tricep muscle.