Learn whether having 15 inch arms is good or bad for a natural lifter. 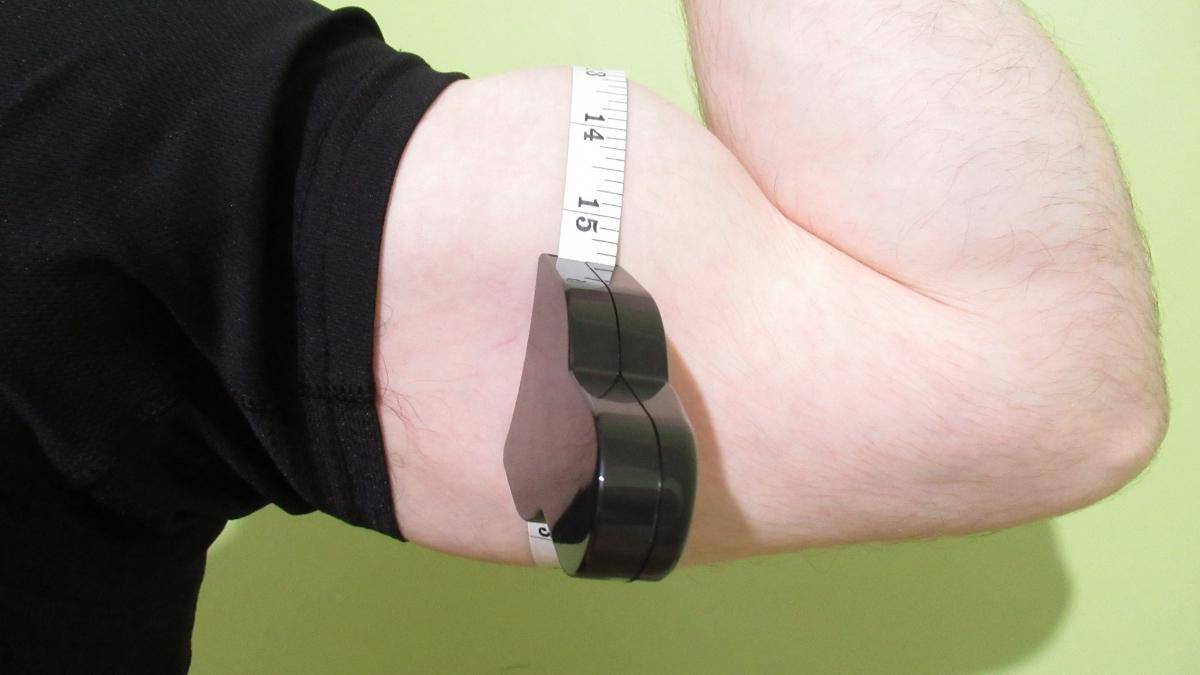 Are 15 inch biceps big and impressive? Or are they just an average bicep size for people who lift weights?

As you'll soon learn, the impressiveness of your 15 inch arms depends on your height, body fat level, training experience, and measurement state (whether you measure them cold/pumped).

In addition to showing you what well-developed 15" biceps look like, this detailed 15 inch arm guide explains how to achieve and surpass 15 and 15.5 inch arms as a natural lifter.

See How Your Arms Stack Up:

Are 15 inch arms big and muscular? Or are they a normal, average size for people who lift weights?

Having 15 inch biceps flexed is fairly impressive if you're of a normal height and have a relatively low body fat level. However, unless you're very short, then your 15 in biceps are unlikely to look huge.

You see, if a short lifter and a tall lifter both have 15" arms, the shorter lifter will always have more impressive-looking biceps because they have shorter muscle bellies and better bicep development relative to their genetic potential.

15 inch arms will always look bigger on a short lifter than a tall lifter.

At the 15 inch mark, the short lifter (presuming that they're natural) may well be closing in on their genetic limitations, which is why their arms will typically look more filled out despite being the same size as the taller guy’s biceps.

However, if you're over 6 feet tall and have 15 inch arms flexed, then you likely still have a lot of upper arm mass to gain.

Are 15.5 inch arms big and impressive for a natural lifter?

Many gym-goers presume that going from 15 inches to 15.5 inch biceps (39 cm biceps) is a piece of cake. However, gaining an extra half-inch of lean bicep mass when your arms are already fairly well-developed is actually highly challenging for a natural lifter.

With that in mind, you can definitely count yourself as above average if you have lean 15 1 2 inch biceps, especially if you're of a somewhat normal height (i.e., not way over 6 feet tall).

Of course, if you're measuring your arms in a pumped state, then your true measurement is naturally going to be inflated.

All of this guidance is presuming that you're measuring your biceps flexed and before any kind of arm training. And remember, you need to get 15.25 inch arms before hitting the 15.5 inch mark, so it's essential to set small goals so that you can track your progress.

In addition to showing you what real 15 inch arms look like at various heights, weights, body fat levels, and builds, these 15 inch bicep case studies will show you the kind of work it takes to get 15" arms naturally.

Jason Yamamoto operates the YouTube channel Strength Over Benches (SOB). He made a video a while back showing what 15 inch arms look like.

Jason is around 5'10" and, by his own admission, has a small frame, which makes his arm size all the more impressive. He'd been lifting for around 2.5 years when he made the video, and you could see that he had a solid foundation of mass.

Some people in the comments section didn't believe that he genuinely had 15 in arms. But having observed numerous lifters with the same size biceps, I can vouch for his authenticity; he definitely has 15 inch biceps flexed in his video.

Of course, he might have bigger arms nowadays if he's still hitting the weights. But the point is that his video is really helpful because it shows precisely what 15 inch biceps look like on a natural lifter without top-tier muscle-building genetics.

As you can see in the video, his arms look lean and muscular, but they don't look huge. Of course, given his height, he also has plenty of mass left to gain, so it's likely that his arms will end up being significantly bigger if he keeps lifting heavy.

So how did Joe increase his arms by 5 inches?

He got rid of his arm day and did three mini arm sessions after his full-body workouts. This enabled him to take advantage of more frequent protein synthesis spikes and avoid doing any junk volume.

However, what really made the difference as far as he's concerned is his commitment to progressively overloading his compound lifts. Although the isolation exercises certainly helped, Joe says that getting stronger at bench presses, chin-ups, and rows really bulked up his arms.

That makes perfect sense. After all, someone who's genuinely strong on their compound presses and pulls is unlikely to have small arms.

The man who operates the YouTube channel Misfit Monk has 15 inch arms flexed and pumped.

The first thing that you'll notice is that his arms have excellent definition and vascularity. Many lifters can train for years—decades, even—and still not have the enviable upper arm aesthetics that this guy has.

When flexed, his arms look even bigger than they actually are because of his leanness and muscle insertions.

So just how did this guy get 15" biceps?

He focused on heavy compound movements and then did some isolation exercises on top.

This is an excellent arm-building approach to training. Far too many lifters get hung up on direct arm training and, as a result, never end up increasing the weight on any of their lifts. In turn, this lack of progressive overload leads to stagnant arm development, so make sure to prioritize your multi-joint movements and heavy arm exercises.

How to get 15 inch biceps flexed as a natural lifter

Make sure to implement these training and diet tips if you want to achieve a 15 inch arm circumference as a natural lifter.

While it's technically possible to get 15 in biceps without training your arms directly, it's definitely not the most efficient way to go about things.

You're much better off doing a combination of compound lifts and isolation exercises if you want to get 15" biceps as quickly as possible.

Isolating your arms ensures that your biceps and triceps are the limiting factors in one or more exercises, which in turn makes sure that you're recruiting plenty of upper arm muscle fibers.

In practice, you could train your arms 2-3 times per week after your heavy compound lifts, which is ideal if you're following a full-body routine.

If you're gaining strength on your compound pulls and presses, then it's likely that your arms are also gaining size. This is primarily because your triceps, which account for around two-thirds of your upper arm mass, are heavily involved in every kind of press.

The triceps are also a very fast-twitch muscle, meaning that they grow remarkably well from heavy presses and explosive lifting, which is exactly what you're getting with the likes of the bench press and overhead press. [1]

Of course, it's important not to overlook the biceps either because if your biceps are nicely peaked, they can really budge the tape measure and get your arms to that intermediate 15 inch mark.

Chin-ups and other underhand pulling exercises are excellent for building the biceps because they're highly conducive to progressive overload (especially if you have micro plates).

So even though isolation exercises might make your muscles burn more, compound movements are often the best way to overload your biceps and triceps and make them grow.

While it's certainly possible to build 15 and even 15.5" biceps without eating in a calorie surplus, it's also not the most efficient method for developing your arms.

As most people know, eating in a calorie surplus provokes weight gain and provides your body with extra energy that it can use to build new muscle tissue. [2]

What many lifters overlook, however, is the fact that training while you're in an energy surplus often helps you to recover quicker, lift heavier, and perform more training volume.

Recovery, progressive overload, and training volume are crucial factors in the muscle growth equation, and you can better optimize them by eating in a calorie surplus.

If you want to know what fifteen inch biceps look like and learn whether they're impressive for your particular height, then make sure to check out this FAQ section. 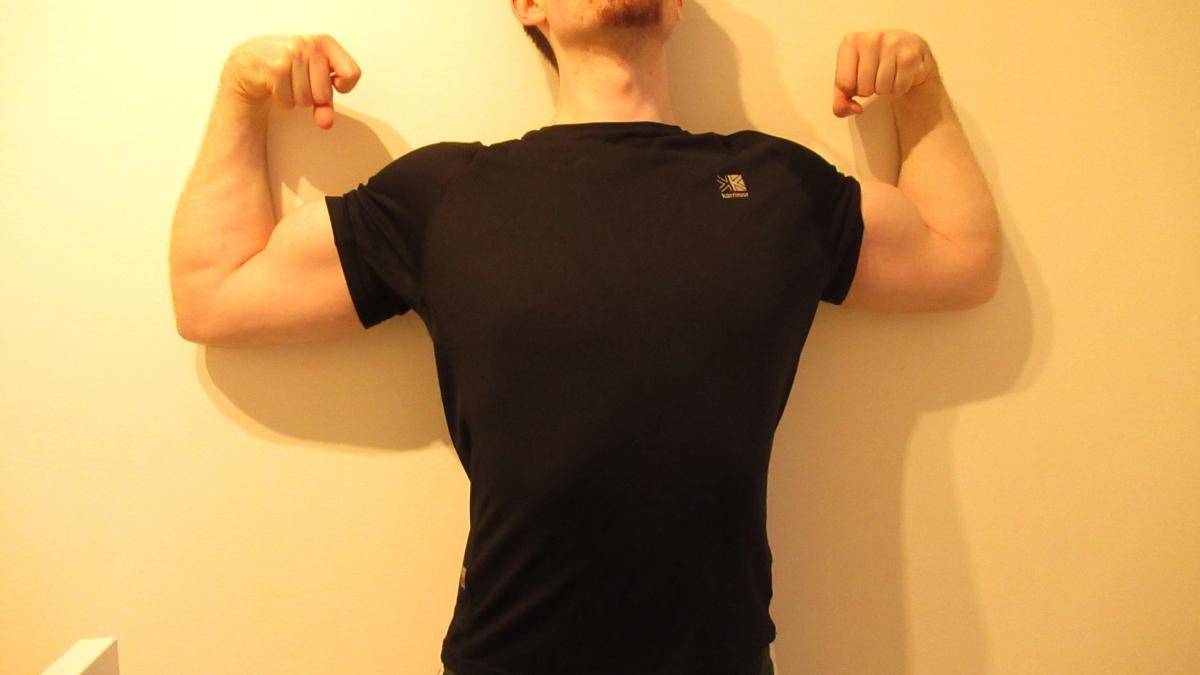 What do 15 inch arms look like on a natural lifter?

The above photo shows you what 15 inch biceps look like on a natural weight lifter with a fairly average height and build. As you can see, the trainee has noticeable biceps size but doesn't have absolutely huge arms.

In this particular instance, the lifter has significantly better biceps than triceps, but it could be the other way around for you, depending on your genetics and training history.

You could expect to achieve arms of this muscularity in around 2 years if you train consistently, progressively, and eat an appropriate diet. 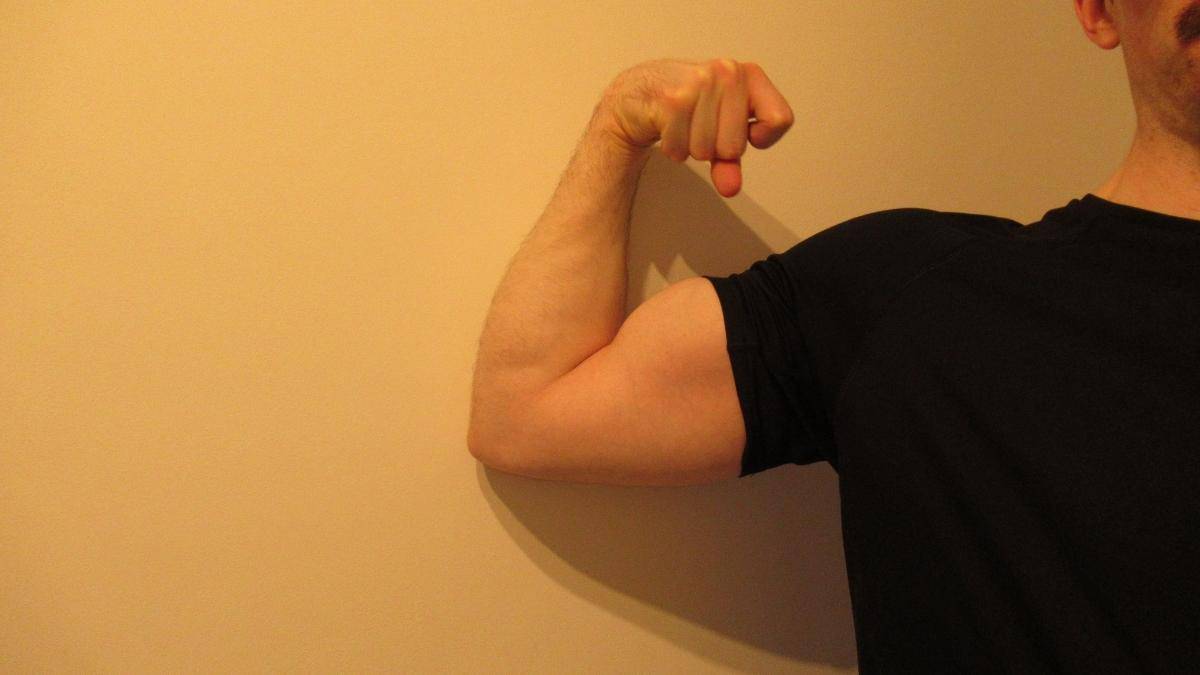 As mentioned, shorter people obviously have shorter limbs and muscle bellies than taller people, which means that at the same arm size, the shorter lifter will always have the more impressive-looking biceps because their arms are more filled out.

So even though taller lifters have the genetics to build bigger arms overall (in terms of circumference measurement), [3] shorter lifters tend to have thicker-looking arms even if their actual measurement is lower. 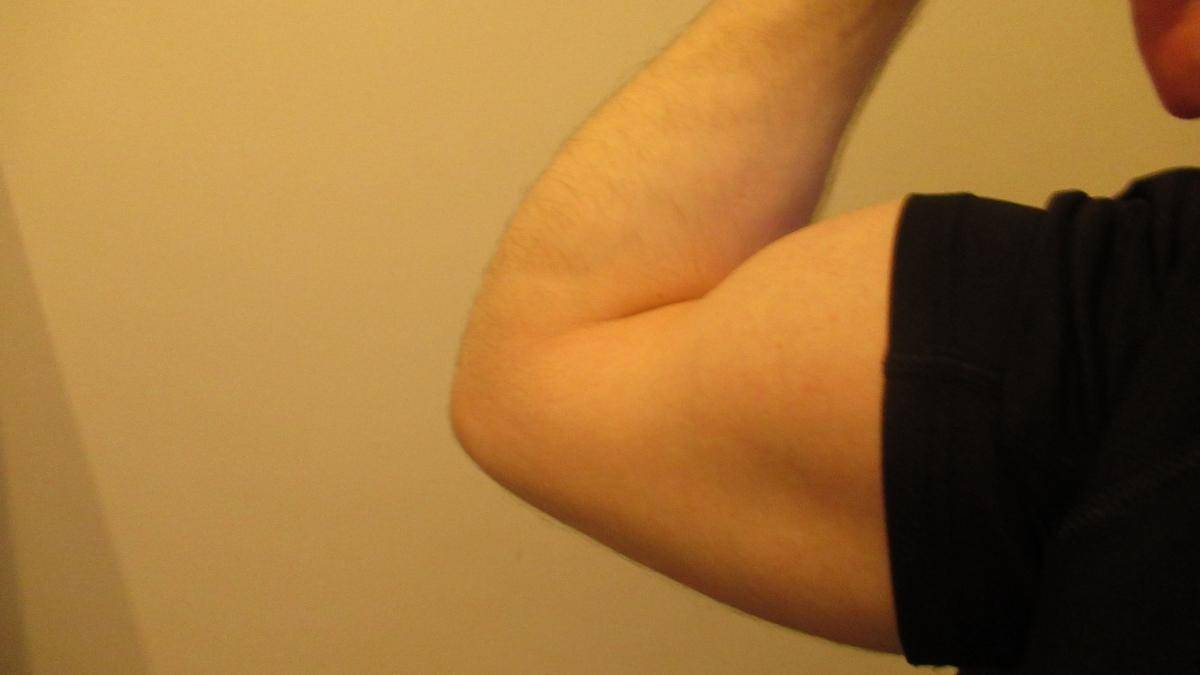 Yes, if you're 5'10" and have a relatively low body fat level, then having a pair of lean 15 inch biceps is an impressive achievement.

While 15" arms are unlikely to look huge at the height of 5'10", they can definitely look muscular (and noticeably so) if you also have good arm definition.

Of course, if you're over 20% body fat, then 15 in arms are unlikely to look impressive at 5'10" because you won't be able to see much separation between the biceps and triceps when you flex. 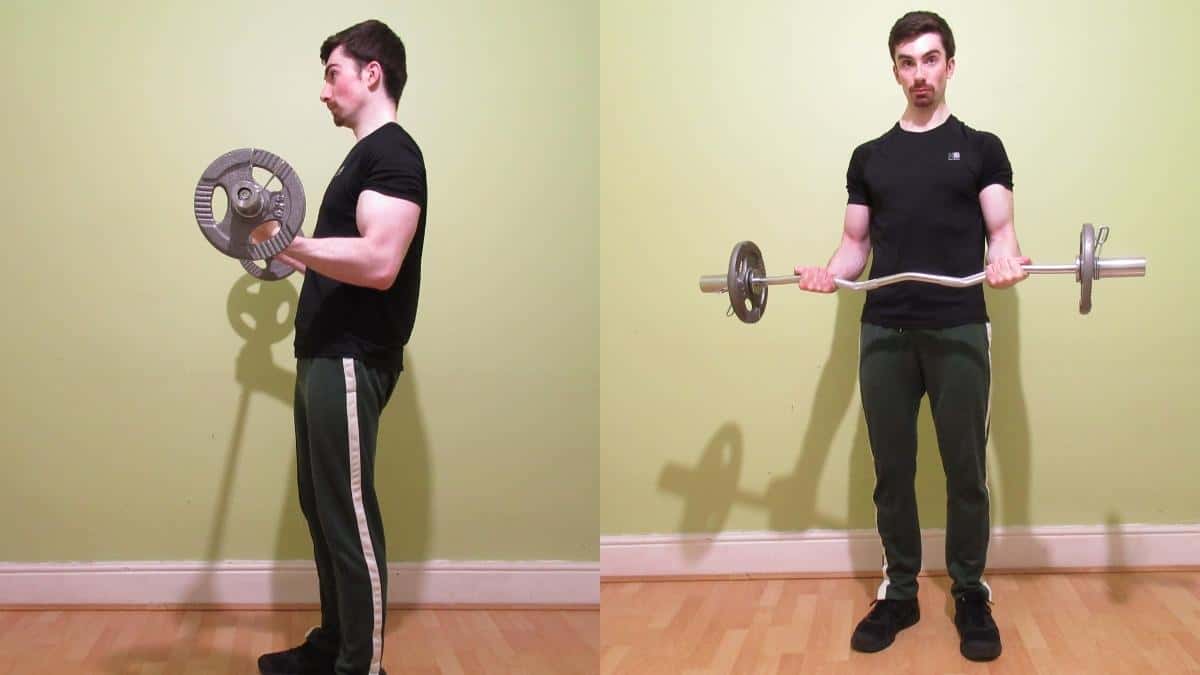 If you're very tall, then going from 15 to 15.5 inch arms is actually pretty straightforward because taller lifters are capable of achieving a bigger bicep measurement due to having more bone mass and longer muscle bellies.

For the average lifter, however, getting 15.5 inch biceps requires much more patience and consistency.

You need to add weight to your compound lifts and isolation exercises while ideally eating in a small to moderate calorie surplus if you want to achieve 15.5 in arms naturally.

If you do that, then it's possible to gain half an inch of arm mass in 6-12 months.

Avoid doing too much pump work (and certainly don't use your pumped measurement as your actual arm size) because it will temporarily inflate your arm measurement while doing little to add actual muscle mass to your biceps and triceps.

Whether or not 15 inch biceps are good or bad, big or small, depends on your point of view.

Most people, for example, don't have lean 15 inch arms. So if you do have 15 in biceps at a relatively low body fat level, then you've clearly achieved something that most gym-goers haven't.

Of course, many people want to exceed the 15 inch mark and get 15.5 in biceps or even a much bigger measurement. However, you shouldn't let someone's opinion discredit your arm-gaining achievements; if you flex your biceps and they look muscular, then that's because they are muscular.