Brace your arm against the preacher pad for better biceps and brachioradialis isolation. 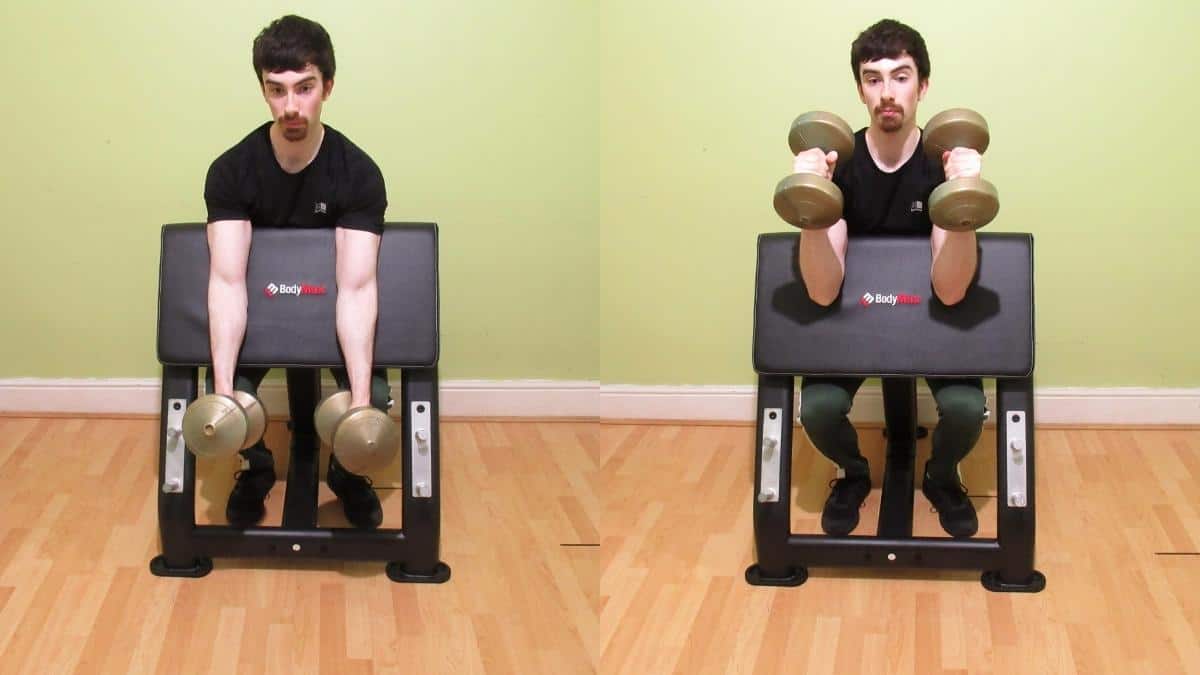 The preacher hammer curl is a brilliant exercise for building the biceps muscle and brachioradialis because the pad helps you to keep your arms in a position of maximum isolation. As such, the movement can help you to build muscle faster because the tension that the weights provide naturally stays on the target area.

With a regular hammer curl, on the other hand, it can be tempting to swing the dumbbells up with your other muscles when the weights become heavy. But with preacher curls, you're basically forced to use good form because you can't cheat the weights up when your arms are braced against the preacher pad.

How to do hammer preacher curls correctly

You can perform hammer preacher curls with one arm at a time for better muscle isolation or with both arms together for greater convenience. The technique is the same for both variations.

The hammer preacher curl isn't exactly the most popular exercise. And that's because it doesn't isolate the biceps like a regular preacher curl. However, this fact in itself is a benefit because, as a result of the neutral hand position, the movement is highly effective for developing thicker forearms.

Bracing your arm against the preacher pad while you curl makes it much harder to cheat the weight up. This not only prevents you from using sloppy form that could cause injuries, but it also means that the vast majority of the tension stays on the target muscles, namely, your biceps, brachialis, and brachioradialis.

Since the already mentioned prime movers are doing most of the lifting during preacher hammer curls, the exercise may even lead to faster muscle growth than the regular version because the muscles are being completely isolated.

You can also do a preacher curl on the cable machine if you want to blast your biceps with constant tension to get a better pump.

Most people perform the preacher hammer curl with both arms at the same time. And while there's nothing wrong with this technique, if you're in pursuit of maximum muscle growth and strength development, it's far from optimal.

Because when your brain has to focus on lifting two weights at a time rather than one, it naturally has to split its attention (and thereby its force output/strength) over both of your limbs.

Conversely, if you perform single arm hammer preacher curls, then you can dedicate 100% of your attention to working each arm to the max. This is important because strength is as much about neural output from the brain (i.e., skill) as it is about muscle size. [1] So for the fastest results, you want to focus on the target muscles as much as possible.

Training each arm unilaterally is one of the best ways to do just this.

The preacher hammer dumbbell curl isolates your arms more than the regular version because you don't need to rely on your core stability as much. Therefore, you can focus more attention on training the target muscles.

This enhanced focus, in turn, leads to a stronger mind-muscle connection—and thus a more potent muscle pump—because all you have to think about is stretching and contracting your biceps as effectively as you can.

As good as the hammer preacher curl is for building arm size, you can often get even better results by working the same muscles from different angles. [2] This is especially true for the biceps because it's a two-headed muscle. So for maximum development, you have to train it with your arms in different positions.

If you want to focus on the long head of your biceps, then performing the incline hammer curl is a smart idea because it really stretches the outer muscle fibers of your biceps and thus makes your arms look thicker.

Also, you could actually do the preacher hammer curl over an incline bench if you don't have access to a dedicated preacher station (or if it's taken).

Cable rope hammer curls are another effective bicep movement because they provide your arms with constant tension, which naturally creates an intense pump in your muscles. For this reason, you may wish to use them as a finishing exercise to flush your limbs with blood after your heavy arm training.

To take the emphasis off your brachioradialis and put it on your biceps, you can do the cross body bicep curl. This unilateral exercise is similar to the hammer preacher curl in that it allows you to lift heavy and overload your biceps by training one arm at a time. The only real difference is that the preacher curl still provides better muscle isolation because the pad makes it very difficult to cheat.

Conclusion: Is the preacher hammer curl a worthwhile exercise?

Hammer preacher curls are less popular than standard hammer curls because they take longer to set up. And after all, not everyone has access to a preacher pad, which is especially true for those who train at home.

Yet, the extra setup effort may be worth the enhanced muscle isolation for some lifters, particularly for those with a bodybuilding background or for those who struggle to maintain good form.

The preacher hammer curl has you brace your entire arm against the pad, and as such, it makes it much harder to cheat the weight up or take tension off the target muscles. For this reason, it's an ideal exercise for those seeking to maximize muscle hypertrophy of the biceps, brachialis, and brachioradialis.

Since the bicep and brachioradialis are fast-twitch dominant muscles, whereas the brachialis is slow twitch dominant, your best bet is to lift with moderate reps (8-12) so that all the areas of your arm get the stimulus they need to grow in size and strength.