Learn how this scientifically optimal curl can beef up your biceps. 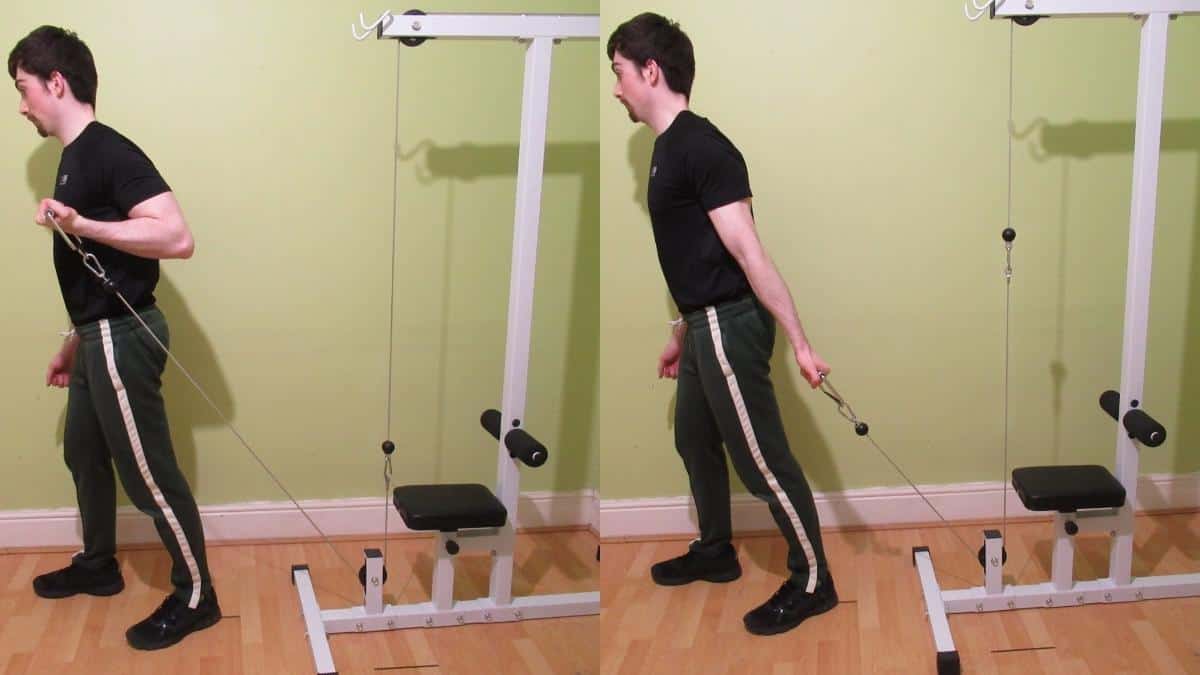 Although the biceps brachii is one of the smallest muscles on the human body, its growth and development are of paramount importance for the majority of lifters. The trouble is that few gym-goers understand how to train their biceps optimally.

That's where the bayesian curl comes in.

The regular cable bicep curl is an effective bicep builder when you perform it with good technique. Yet, the muscle stretch that it provides is pretty lackluster, to say the least. Yes, the contraction is intense, but as any savvy lifter will tell you, there's a lot more to maximizing hypertrophy than just getting a good pump.

How to do a bayesian cable curl

The bayesian curl may seem like just another of the many bicep cable exercises. However, there are a few nuances to this evidence-based exercise that makes it particularly beneficial for those in pursuit of maximum bicep growth.

Bodybuilders have been doing what's essentially a bayesian cable curl for decades. But their reasoning for performing the exercise didn't really progress beyond "the pump feels good, so I might as well do it."

It was Menno Henselmans who came up with the name for and reasoning behind the bayesian curl. In one respect, the exercise mimics an incline dumbbell curl because the biceps get a really good stretch during the eccentric part of the rep.

But during the concentric, the movement feels more like a concentration curl because by allowing your shoulder to come forward slightly, you naturally increase the intensity of the peak contraction.

So, in theory, because you're getting an excellent muscle stretch and a powerful peak contraction, bayesian curls are arguably the ultimate bicep drill from a hypertrophy standpoint.

The bayesian cable curl is a unilateral exercise, and as such, it can help to reduce any bicep muscle imbalances that you currently have (or prevent them from developing in the future). [2] This benefit is significant if you're a bodybuilder or physique athlete because symmetry is a large component of having a complete physique.

Similarly, you can gain strength faster with bayesian cable curls because when you're only training one arm at a time, your central nervous system can direct all of its force output to that specific bicep.

If that seems hard to believe, let me ask you this: If I told you to contract every muscle in your body simultaneously, would you be able to maximally contract any single one of those muscles?

You can try if you want. But I can spare you the grimace by telling you that the answer is a resounding no.

Your brain simply can't put forth the neural effort to maximally contract every muscle at the same time. So, logically, it follows that by performing a unilateral isolation exercise like the bayesian curl, you basically get to pound your biceps with the absolute maximum force that your body is capable of producing.

While cables don't offer guaranteed injury protection, they have a much better track-record than free weights. This is especially true when it comes to exercises, such as curls, which require flexion (or extension) of the elbow joint.

With free weights, your connective tissue and muscles have to stabilize 100% of the resistance. But with cables, the pulley system helps you to stabilize the weight, meaning that your tendons and ligaments are put under less stress and can thus heal faster.

This quicker connective tissue healing may indirectly result in more muscle growth if it allows you to train your biceps more frequently and, ultimately, with a higher volume. [3]

The cable concentration curl is a great alternative to bayesian curls if you're looking to blast your biceps with the most intense peak contraction possible. Unlike regular concentration curls, the cable version provides more consistent resistance, which may result in more time under tension for your biceps.

You can also try the cable drag curl to finish off your biceps after a hard workout. This old-school arm exercise gives your biceps a distinct pump and burn that's hard to replicate with other exercises and which is only intensified with cables.

Continuing on with the theme of maximal bicep contractions, the cable behind the neck curl may well be the best of the lot. And that's because this exercise trains your biceps in their shortest anatomical position, which is to say when they're in maximal shoulder flexion.

The bayesian curl is a top-tier bicep training drill that offers the best of both worlds; an intense peak contraction and a satisfyingly deep muscle stretch. It's also relatively easy to get strong at bayesian curls because cable systems naturally lend themselves better to microloading than dumbbells.

Moreover, the exercise can also help to improve the symmetry of your upper body by reducing any bicep muscle imbalances that you currently have.

The only downside is that your workout routine might take a bit longer if you were accustomed to training both arms together with something like barbell curl.