Includes 3 cable concentration curl variations to get your biceps growing. 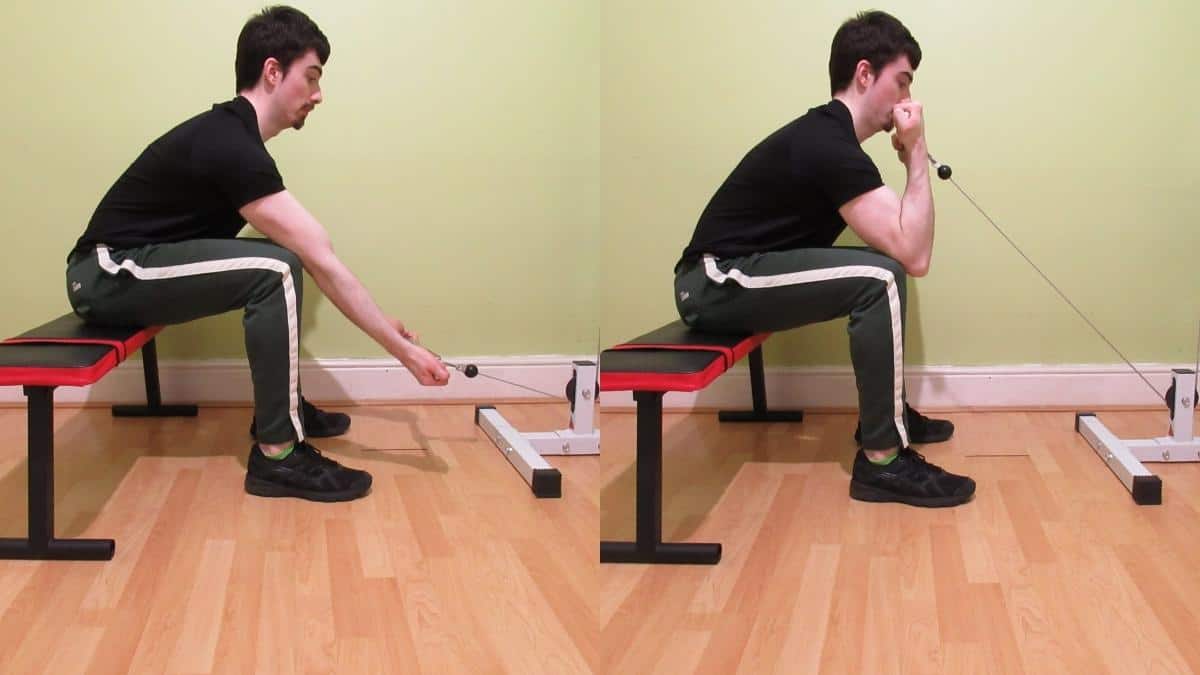 There are so many different exercises for the bicep muscle that it can be challenging to figure out which is the most effective. And while there's no one exercise that's superior to all the others, cable concentration curls are a proven arm-builder because they're essentially a modern spin on a class bodybuilding exercise.

If you've been doing normal cable straight bar curls for a while, then you'll be pleasantly surprised at just how intense the peak contraction feels during concentration curls.

Best of all, there are three different ways to perform this unique bicep exercise, each of which has its pros and cons. I'll show you the most popular method first, but be sure to stick around until the end when I'll reveal the other two variations of the cable concentration bicep curl that most lifters overlook.

How to do cable concentration curls

Seated cable concentration curls are easy to perform, providing that you can wheel a weight bench into the correct position (which is easier said than done in a busy commercial gym). Yet, even with the optimal setup, you can still compromise your results if you make any of these three common concentration cable curl mistakes.

Low rep training is undeniably effective for building upper and lower bicep mass because it allows you to lift heavier weights and thus overload your muscles. However, as the research will tell you, overall training volume (the total amount of weight you lift over a given session or week) is more important than lifting the heaviest possible weights when it comes to maximizing muscle hypertrophy. [1]

So, knowing that low reps and high reps are about as effective as each other for building slabs of bicep mass, it's important to match each exercise to the rep range that it's best suited to. Cable concentration curls are obviously better suited to high reps than low reps because the movement is hardest when your biceps are at their weakest, i.e., when they're in a shortened muscle position.

So to take advantage of the resistance curve of cable concentration curls and achieve the best possible peak contraction, make sure to sticks to sets of 10 or more.

Even though the cable concentration bicep curl emphasizes the contraction part of the rep, you still need to attain a full biceps stretch if you want to maximize your muscle growth.

Therefore, you need to let your elbows fully extend as you lower the weight. Contracting your triceps at the end of the rep is a surefire way to make sure that you're getting a full range of motion for your biceps because when the triceps are contracted, the biceps are automatically fully lengthened due to the antagonistic relationship between the two muscles. [2]

You can also do the hammer concentration curl if you want to strengthen your brachioradialis and brachialis muscles as well as your biceps.

Not trying all the variations

Without trying the three variations of the cable concentration curl, you'll never know which is the best for your body. Of course, you could just pick one exercise and stick with it, but you might find that certain variations help you to reach your goals faster.

Each type has its pros and cons. For example, the one-arm version is excellent for fixing any muscle imbalances that you currently have. But the downside is that it takes twice as long to complete your sets since you're training each arm separately.

We've already gone over the sitting cable concentration bicep curl. However, if you want to add variety to your training program, give these other two alternatives a try so that you can see which provides you with the best pump.

To perform it, set the cable pulley to shoulder height and attach a D-handle. Grab the handle with a neutral grip and then step back from the machine so that your arm is fully locked out. Curl the handle towards your opposite shoulder and squeeze your biceps. Savor the satisfyingly intense contraction for a moment, and then release the handle under control by letting your biceps stretch out.

Unlike the barbell concentration curl, this variation is particularly effective for improving the symmetry of your physique because you can ensure that both of your biceps are receiving equal work. So if you have any muscle imbalances or want to prevent them from cropping up in the future, make sure to add single arm cable concentration curls or some kind of unilateral bicep drill to your workout routine.

If you want to channel your inner Arnold Schwarzenegger and get your pump on, then bent over cable concentration curls will make you feel like you're staring in your own version of the 1977 classic Pumping Iron.

Begin by attaching a D-handle to the lower pulley of the cable column. Then, stand parallel to the pulley and grab the handle with a neutral grip. Bend over at the waist and let your arm hang so that your elbow is fully extended. Curl the handle to your opposite chest/shoulder muscle and squeeze your biceps. Hold the contraction for a second—picture your bicep muscle fibers tensing up—and then release the handle slowly until your biceps are once again stretched out.

Of course, there are many other bicep workouts with cables that you can do. But few exercises, besides maybe the behind-the-head cable curl, produce a peak contraction in the way that concentration curls do because they don't emphasize the biceps in their shortened muscle position.

The verdict: Is the concentration cable curl worth doing?

It's recommended to try the bent over variation as well as the standing and seated versions to see which one you prefer. But whichever exercise you end up including in your program, your best bet is to perform cable concentration curls for high reps so that your biceps get enough time under tension to grow bigger (and so that you don't stress your joints).