Learn how to intensify your preacher curls by doing them with cables. 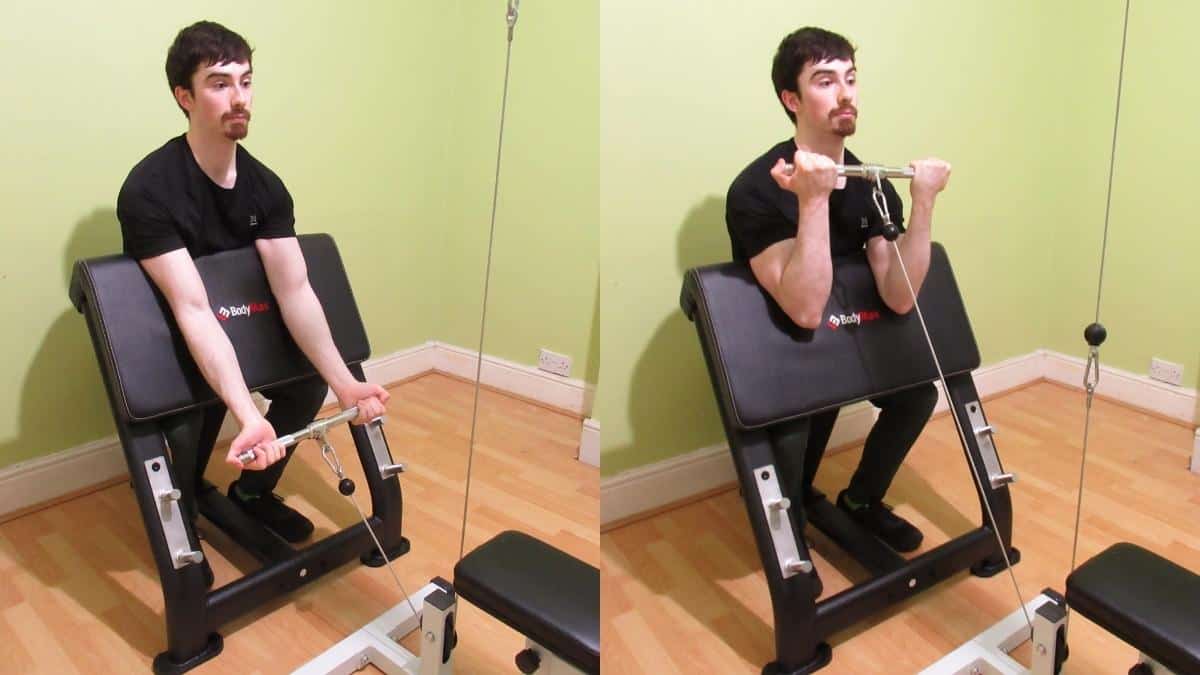 Ever since Pumping Iron popularized modern bodybuilding in 1977, hypertrophy of the biceps brachii has been at the forefront of virtually every weight training program since.

Yet, few exercises isolate the biceps as well as preacher curls.

So that got me thinking. If we could combine the constant tension trait of cables with the bicep isolation benefit of preacher curls, then we might just have the ultimate bicep exercise at our disposal.

This idea is the topic of my cable preacher guide. I hope you're ready to make some gains.

How to do a preacher curl with cables

As you'll learn a little bit later on, cable preacher curls can be an absolute nightmare to perform in busy commercial gyms. Yet, the complicated setup is tempered with some undeniable bicep building benefits that no serious bodybuilder should ignore.

Doing a preacher curl on a cable machine provides your biceps with consistent resistance. This is so because from the moment you lift those weights off the stack, it's completely down to your biceps to resist the tension that the weights provide.

This extra demand results in a more powerful muscle pump because your biceps are getting more time under tension now that you're doing the preacher curl with cables.

The only slight downside to this benefit is that you'll probably have to lighten the weight (or at least temporarily reduce your reps for the same weight) because your biceps will be challenged throughout the entire repetition.

You can also do a hammer curl on a preacher bench if you want to train your brachialis and brachioradialis as well as your biceps.

If you perform the dumbbell preacher curl, then gaining strength can feel like running a never-ending marathon because it's so hard to regularly increase the weight by 5lbs per side.

Of course, doing straight bar preacher curls can sidestep this problem, but then you might run into muscle imbalances and all of the negatives that such a problem creates.

But what if you could have your cake and eat it too? What if you could get the benefits of unilateral training that dumbbells offer with the ease of progressive overload provided by barbells?

You can! And it's called the one-arm cable preacher curl.

Training one arm at a time not only improves your mind-muscle connection by letting you focus on one bicep at a time, but it also makes you stronger because now your central nervous system can direct all of its force to one arm rather than two. [1]

Moreover, cable weight stacks generally increase in more manageable increments than dumbbells. But you can take this a step further by hooking small microplates onto the selector pin. Doing this will enable you to gain strength faster and, with enough consistency, improve the size and appearance of your biceps.

Despite the undeniable benefits of doing the preacher curl cable style, there are also some significant downsides that might make you think twice about including this double-edged exercise in your training program.

There's an unwritten rule in some gyms that you shouldn't move certain pieces of equipment. The preacher curl station is often one of these items. People just expect it to be in the same position, and so when you carry it halfway across the gym, you're likely to get some dirty looks from your fellow lifters.

Not only that but with so much equipment on a typical gym floor, simply maneuvering the preacher station from the free weight area to the cable machine can feel like mission impossible. And in some cases, it may actually be impossible if the pathway is congested.

Additionally, preacher curl benches are heavy. So unless you have a training partner to help you carry the load, then you might find that your biceps are too tired to lift the weights by the time that you get the preacher pad in position.

The answer to this problem is to just use a weight bench. People don't usually mind if you reposition an adjustable bench because they're far more numerous in the typical gym than preacher stations are.

Of course, you could just do EZ curls (cable), but even with the same attachment, you don't get the advantage of having your arms supported (which minimizes cheating) as you do in a cable preacher curl.

The downside of using the bench method for the preacher cable curl is that you're now forced to train one arm at a time. While this unilateral training style is arguably superior from a hypertrophy standpoint, it's just not practical to do for every body part if you have a busy lifestyle and can only spare a small amount of time for a workout.

Of course, if your biceps are lagging, then it might still make sense to train them unilaterally. [2] You could save time elsewhere by training your stronger muscle groups bilaterally, which may make the one arm cable preacher curl feasible even if you're pushed for time.

Performing a preacher curl with cables opens up the door to many exciting workout possibilities because there are as many variations as there are attachments. That said, there's no need to perform all the different variations in the same workout. Otherwise, your gym session would be hours long, and your biceps would take ages to recover.

So here are my favorites for overall arm development.

As mentioned, single-arm preacher cable curls are likely optimal for producing maximum muscle hypertrophy because they enable you to direct all of your attention and physical force toward the specific bicep that you're working.

Moreover, training each arm separately is a great way to develop a stronger mind-muscle connection that will also carry over to your other exercises.

Also, read our guide to the kneeling incline cable curl if you're looking for another exercise that produces an intense peak contraction in the biceps.

Reverse cable preacher curls are seldom performed in the modern gym. However, doing them regularly can make your physique stand out because the movement mainly works the brachioradialis, which is the muscle on top (thumb-side) of the forearm that most people neglect.

You can check out the other bicep cable exercises that we recommend if you want to see which are the most effective for building your arms.

How effective is the preacher cable curl for building the biceps?

The cable preacher curl retains all the benefits of the free weight version—bicep isolation, ease of microloading, comfortable arm position—but with extra emphasis on time under tension pumping your biceps to the max.

Thanks to the constant tension of cables, your biceps get "rewarded" with more lactic acid, which in turn helps them to get closer to muscular failure, and thus closer to muscle growth itself.

Just make sure to stick to high reps. If you try to go heavy, then you might feel as if you're being pulled toward the machine like a helpless piece of metal being drawn to a magnet.