Put a cable twist on this popular dumbbell exercise for faster bicep growth. 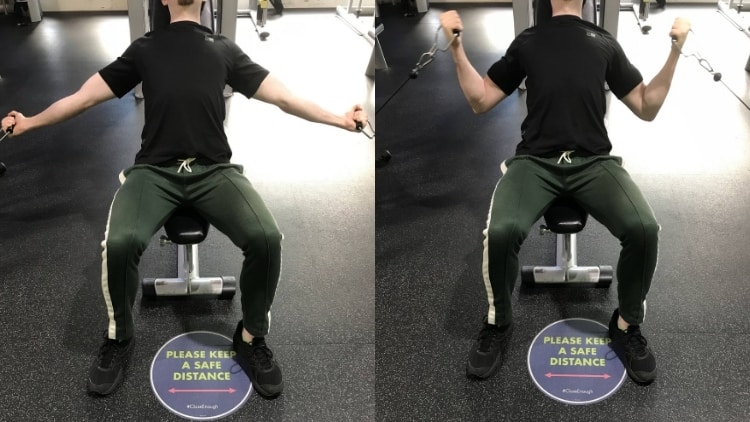 If you want to develop the bicep muscle to its fullest potential, then you need to work it from a variety of angles in order to stimulate all of the different muscle fibers.

Standard cable bicep curls certainly have their place, but since your arms are by your sides or slightly in front of you in that exercise, the movement leaves the long (outer) head of your biceps understimulated.

That's where the incline cable curl comes in.

This intense bicep training drill is a twist on the classic incline dumbbell curl. The difference is that your arms are positioned further out to your sides because you're grabbing the handles of a cable crossover.

How to do incline cable curls correctly

There are at least five ways to perform a cable incline curl. I'll show you three of them in the alternatives section of this article, but let me explain the main two variations now.

The first method is to use a compact cable machine. Here, the exercise more closely mimics the incline dumbbell curl because your arms are close to your sides. You can do this version seated or standing, but that's not the variation that I'm focusing on now.

For our version of the incline cable bicep curl, we'll be using the full-length cable crossover machine. Why?

Because it emphasizes muscle fibers that regular incline curls don't. So since we're striving for complete bicep development, it's within our interest to perform curls with our arms in a variety of different positions.

The seated incline cable bicep curl gives your arms a great pump, even with mediocre form. Yet, if you're willing to go the extra mile to get those bicep gains, then make sure to avoid these four mistakes to get ahead of the pack and take your arm development to the next level.

Not positioning the bench centrally

Unless you want bicep muscle imbalances, make sure that you position the bench in the center of the cable crossover station. Your positioning doesn't need to be inch-perfect, but if the bench isn't central, then one of your biceps will end up doing more work than the other.

Similarly, make sure to place the middle of the bench in line with the cable pulleys. It's not technically wrong to have the bench in front of the machine, but that's a different exercise. The idea with this version is to curl with your arms pointing out to the sides (like in a lateral raise but not quite that extreme) rather than by your sides like in a standard incline curl.

You can also do dumbbell incline hammer curls if you want to shift more of the tension onto your brachioradialis and brachialis muscle fibers (as well as the biceps).

Shoulder flexion is the movement that you perform in a front raise. It actually works your biceps to a degree because the long head of the biceps crosses the shoulder joint and thus helps to flex it. [1] That's why exercises that have your arms in front of your body, like a preacher cable curl, are very effective for building the biceps.

However, with an incline cable curl, the point of the exercise is to keep your arms behind your body so that you can get a proper bicep stretch. So as you curl the weight up, make sure that you don't let your shoulders round forward. This is easy to accomplish if you retract your scapula during the initial setup.

You want to use a bench angle of 30 degrees—ideally—or 45 degrees if it feels more comfortable. Anything less than 30 degrees, and you'll reduce the intensity of the bicep contraction. Anything more than 45-degrees, and your arms won't be far enough behind your body to stretch the biceps long head.

On most standard weight benches, 30 degrees is the second notch up because the backrests typically ascend in 15-degree increments. But definitely double-check your equipment to see if it follows the convention.

Incline cable curls are a versatile exercise because you can do them in different positions in order to work your biceps from a different angle. [2] We'll examine the pros and cons of each alternative below.

You can also click the link to see our full cable bicep workout if you're looking for a complete routine to follow in the gym or at home.

The kneeling incline cable curl is a bit like a concentration curl in terms of how the exercise feels, which is to say, very intense. However, the setup is completely different. To perform it, you connect a straight bar to a high pulley, kneel on the floor, and then curl the bar toward your face.

While the kneeling incline cable curl is certainly easier to set up than the regular cable incline curl, you can quickly begin to feel off-balance as you get stronger. Therefore, I recommend performing it at the end of your workout for high reps unless you have a rock-solid core.

If you want to perform lower reps to build that overall mass, then doing EZ bar cable curls is a better idea because you can lift heavier in a standing position.

You can perform the standing incline cable bicep curl on any cable machine that has a dual pulley system. However, I recommend using a more compact station so that you can focus more on your biceps rather than on trying not to be pulled backward by the weights.

The form is virtually the same as with the standard incline cable curl. You let your arms drift behind your body and then you flex your biceps to curl the weight up.

You can also do the prone curl to work your biceps from the opposite angle, which is to say, sitting on the bench in a reverse position.

There are two variations of the seated incline cable bicep curl, the first of which you saw in the how-to section of this article.

The second version is easier to do in a busy gym because you only need access to a single cable column. To perform it, wheel an adjustable bench so that it's facing the cable pulley. Connect a straight bar to the carabiner clip, set the backrest to a 30-degree angle, and then lie back on the bench with the bar in your hands.

To start the set, curl the bar toward your chin by squeezing your biceps as hard as you can. Then simply lower the bar by letting your biceps stretch out until your elbows are completely extended.

Compared to the regular incline cable curl, this particular seated version emphasizes the peak contraction and the short head of your biceps. The one that I discussed in the how-to section prioritizes the stretch part of the rep and the long head of your biceps.

The verdict: Are incline cable curls worth doing?

If you want to add variety to your arm workouts, then I highly recommend giving the incline cable curl a shot if the setup is feasible in your gym. The exercise provides an excellent biceps stretch that's sure to cause some serious DOMS if you've never tried it before.

If you can't wheel a bench into a cable machine due to a congested training environment, then you can also perform the exercise standing and get virtually the same results.