How to perform seated dumbbell curls for your biceps

Learn why the seated dumbbell bicep curl is one of the all-time great arm builders. 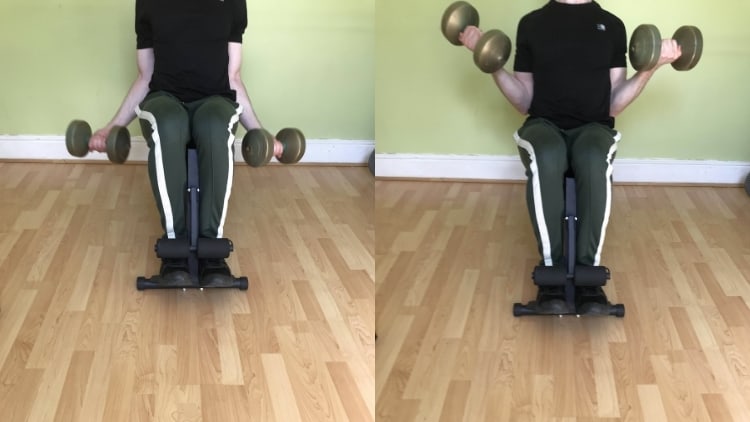 What are the biceps for if not smashing out heavy sets of dumbbell curls? Just about every weight lifting enthusiast loves blasting their biceps, and in this article, we're going to discuss one of the top exercises for the job.

So if you've ever wondered about the pros and cons of doing bicep curls sitting down, this guide is for you. After showing you how to perform seated DB curls with the optimal bicep-building technique, we'll discuss the merits of ditching regular curls and doing them sitting down instead.

How to do seated dumbbell curls

The seated curl is a straightforward exercise that can reliably build your biceps when performed correctly. But despite the plentiful positives, there are also a couple of downsides to doing your dumbbell curls seated that you need to keep in mind.

The sitting dumbbell curl is superior to the regular version for isolating your biceps, which was the gist of our seated bicep curl vs standing curl comparison.

This is true for a few reasons. First off, sitting curls have a much lower core stability requirement than the standing version. As such, you can dedicate 100% of your attention to working your biceps because you don't need to worry about keeping your abs overly tight.

Second, you can't effectively cheat the weights up during seated bicep curls because the usual culprits—legs, hips, back, etc.—are all stabilized by the bench. Therefore, your biceps have to perform the majority of the lifting, which naturally means that they get to enjoy the lion's share of the tension and the muscle growth that results from it.

You can take this muscle isolation to the next level by doing the sitting bicep curl with your back resting against the bench. This positioning takes your abs more or less out of the equation and lets you focus purely on working your biceps. In other words, all you need to think about is flexing at the elbow. Now that's what I call true isolation!

The seated dumbbell biceps curl is an excellent mass-building movement, and again, for more than one reason.

Unlike seated hammer curls, the seated bicep curl trains both of the primary bicep functions (elbow flexion and forearm supination) by having you lift with fully supinated palms. This grip maximizes your bicep muscle activation and leads to greater hypertrophy down the road if you hit the gym consistently.

But seated dumbbell curls are also good for building size because they enable you to focus purely on the working muscle. In other words, the sitting curl doesn't divert tension away from your biceps because you don't need to put as much effort into stabilizing your core since the bench effectively does it for you.

So although you can't swing the dumbbells up as easily while sitting down (which is a good thing), you're also putting your body in a stronger position to lift heavier weights because you can channel all of your strength into curling rather than curling and stabilizing.

To focus more on your brachialis and brachioradialis, you can also do the seated reverse dumbbell curl after you've done your seated dumbbell curl sets.

You need a weight bench that has a backrest in order to perform seated curls optimally.

While you can technically do the exercise perched on the edge of your sofa, that setup doesn't give you the core stability that is the reason for doing the seated dumbbell curl in the first place.

Plus, the cushions would get in the way.

Of course, none of this is a problem if you train in a well-equipped gym. But if you lift weights at home, it's not always possible to do drills like sitting dumbbell curls without distorting the exercise.

But even if you do have access to a gym, sitting bicep curls still aren't as convenient as the regular version because they require a weight bench, which are often taken at peak times. This is especially true for seated cable curls, which require both a weight bench and a cable column.

Conclusion: Should you do seated curls or not?

If you want to maximize your bicep isolation by taking your other muscle groups more or less out of the equation, then doing seated dumbbell curls is an excellent idea. By bracing your torso against the back pad of the bench, you can focus purely on training your biceps and conjure up a stronger mind-muscle connection that will enable you to get a more effective workout.

The seated bicep curl works at any rep range, so feel free to perform both high and low repetitions to see which you prefer. Most lifters stick to sets of 6-12 reps the majority of the time because it provides plenty of time under tension while also allowing them to lift heavy enough to fatigue the fast-twitch muscle fibers.