How to do a kettlebell Zottman curl

Discover the 4 pros and cons of doing Zottman curls with kettlebells. 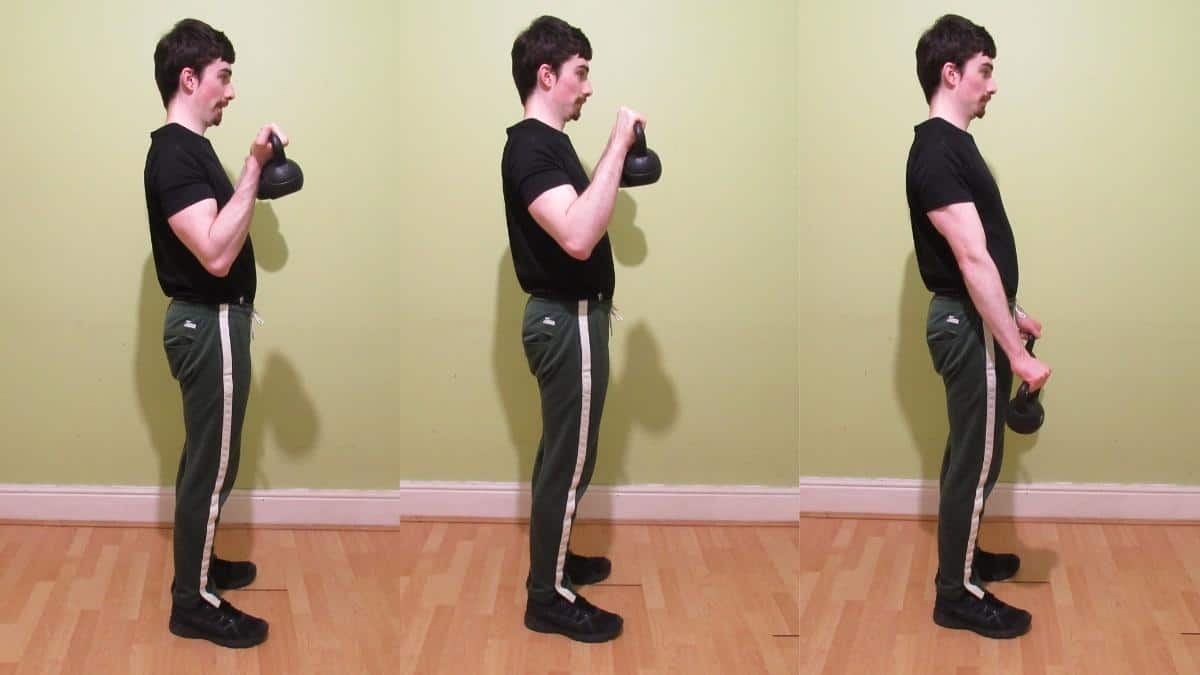 Besides elbow flexion, the primary biceps function is forearm supination. Knowing this, you can modify the traditional kettlebell curl in order to shift the emphasis onto your brachialis and brachioradialis, which are two muscles that many lifters need to bring up.

There are multiple variations of standing Zottman curls that you can do to build your arms. The kettlebell Zottman curl is just one of these versions.

Its main advantage (or disadvantage, depending on your point of view) is that the exercise heavily relies on your forearm strength in order to keep the kettlebells in the correct position.

As such, you get an excellent forearm burn, but you also have to lift lighter weights due to the extreme challenge that this movement places on the wrist extensors, which means that you can't overload the target muscles—biceps, brachialis, and brachioradialis—with as much resistance.

How to perform a kettlebell Zottman curl

Like many popular kettlebell bicep exercises, there are both pros and cons to doing your Zottman curls with kettlebells. So here are the advantages and disadvantages that you need to take into account before deciding if this exercise is right for you.

You need to keep your wrists straight during the Zottman kettlebells curl so that the weights don't smack the backs of your hands. This naturally means that your forearm flexors and extensors have to work overtime in order to keep your wrists in the proper position. As such, kettlebell Zottman curls are a great compound exercise for building overall upper and lower arm mass.

The kettlebell Zottman curl builds proportional arms in two ways: First off, it enables you to ensure that each arm receives equal work because you need to lift the kettlebells independently. Second, the movement overloads the brachialis and brachioradialis muscles during the eccentric portion of the rep, both of which are comparatively less developed than the biceps on many people's physiques.

Gyms are becoming increasingly functional these days. However, not all fitness facilities offer an extensive range of kettlebells. Therefore, it can be difficult to increase the resistance in manageable increments, which in turn makes it harder to gain strength. This is also a problem when you do incline curls with kettlebells and other such exercises that train small muscle groups.

Con: It's hard to hold the kettlebells

Your forearms have to contract extremely intensely to keep your wrist straight during Zottman kettlebells curls. This is fine if you have lagging forearms and want to improve them, but it's not the primary purpose of the exercise.

And so by relying on the strength of your forearms, which will likely give out before your upper arms, your biceps, brachialis, and brachioradialis will never get the heavy overloading that's characteristic of Zottman curls and which is basically the only reason why people perform them.

Should you do Zottman curls with kettlebells or not?

If you want to develop your arms as a whole, then performing kettlebell Zottman curls makes a lot of sense because, unlike a concentration kettlebell curl, it works a lot more muscles than just your biceps.

If, however, you want to keep the tension on your brachioradialis and brachialis muscles, then you should choose a non-kettlebell exercise. TRX Zottman curls are a good choice here if you train at home.

The reason being is that the whole point of Zottman curls is to overload your brachialis and brachioradialis during the eccentric phase of the rep. But since you have to rely on the dubious strength of your forearm flexors and extensors in order to keep your wrists straight and avoid hurting your hands, you can't effectively overload these muscles when you use kettlebells for the Zottman curl.

Of course, if you only have access to kettlebells for whatever reason, then you can still get some good results from this exercise. However, you won't be working the target muscles optimally, that's all.