How to do every type of resistance band tricep pushdown

Here are 10 banded tricep pushdown variations that you can do almost anywhere. 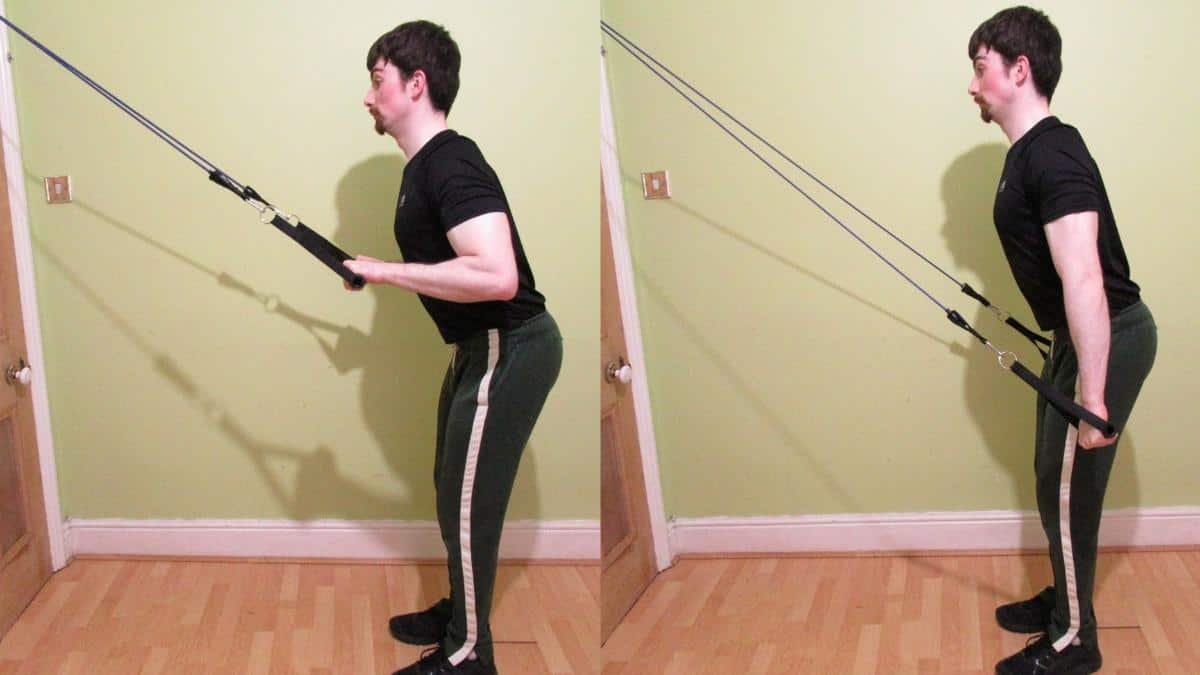 The banded tricep pushdown is a convenient and highly effective isolation exercise for training the triceps.

Unlike the rope pushdown, the resistance band pushdown doesn’t require any expensive equipment or a gym membership, which means that you can perform it virtually anywhere.

Besides being an excellent rope triceps pushdown alternative for when you can’t get to the gym, the resistance band tricep pushdown is also a remarkably versatile exercise, one that enables you to work your triceps from a variety of angles.

This guide shows you 10 different ways to do tricep pushdowns with bands so that you’re never short on tricep training inspiration.

How to do a banded tricep pushdown

Here are 9 additional tricep band pushdown variations that you can perform almost anywhere.

We used a band with separate handles in the initial tutorial for two reasons: one, to ensure that both of your triceps are receiving similar amounts of work, and two, because you can connect multiple bands to these handles to progressively increase the resistance.

Yet, if you don’t have a band set or are just doing this exercise for a quick pump, then you can also perform the movement with a single, heavy resistance band instead.

To secure this kind of band, you can use a door anchor or simply loop it around a stable surface such as the top of a squat rack or a pull-up bar.

Heavy banded pushdowns will challenege even the strongest pair of triceps.

After that, you just grab one side of the band with each hand and then flex your triceps until your elbows are completely locked out. Then, you simply release the contraction in a controlled manner until your hands get to around chest height.

As you can see, heavy band pushdowns come with the added benefit of enabling you to lift with a neutral grip, which tends to take most of the pressure off your wrists.

The only minor drawback is that you have to actively grip each side of the band because there are no handles. So if you don’t have very good grip strength or if the band is really heavy, then your forearms could fatigue before triceps (although, in my estimation, that’s very unlikely to happen).

Performing a single arm tricep pulldown with resistance bands is one of the best ways to ensure that your triceps are receiving equal amounts of work and thus developing in proportion.

The single arm banded pushdown really lets you hone in on each of your triceps, which in turn helps you to establish a stronger mind-muscle connection and fix your tricep size asymmetries.

You can do the one arm resistance band tricep pushdown with either a single band or by grabbing both sides of the material that’s located above the band handles.

Using a single band is likely the better option because you can secure the end of the band around your thumb and fingers so that it doesn’t slip out of your hands mid-set.

If you grab both sides of a band in one hand, then you’ll be relying on your grip strength to a much greater extent, which could make it harder to focus on training your triceps.

The resistance band reverse grip tricep pressdown produces what you would have to term a ski-splitting peak contraction.

This is because when you use a reverse grip for resistance band pressdowns, your elbows naturally remain tucked into your sides, which in turn enables the long head of your triceps to contract harder since your shoulders are in slight extension (only the long head is affected by your shoulder position).

The trade-off is that you can’t lift as much weight as you can during an overhand banded tricep pushdown.

This is because when you’re using a reverse grip, you can’t push into the band handles with the palms of your hands. Instead, you’re performing somewhat of a pulling motion with your triceps and using your hands as pure and simple hooks to hold the handles.

Now you know why this exercise is often referred to as the resistance band tricep pulldown.

If you want to combine the intensified peak contraction of the reverse band pushdown with the symmetry sculpting capability of the single arm band pressdown, then banded single arm reverse grip pushdowns are the way to go.

Training unilaterally means that you don’t have to split your focus between two arms.

On the contrary, you can dedicate all of your energy to giving each of your triceps the best possible growth stimulating workout.

The only downside is that your session will take a bit longer when you train each arm separately, which is something to keep in mind if you don’t have much time to work out.

Since your hands are further away from the anchor point during a kneeling tricep band pushdown than in a standing band pushdown, you’ll get extra tension during the initial phase of the rep because the band will be more stretched.

Of course, you can mimic this strength curve by simply moving further away from the anchor point while you’re standing up, which is to say, by taking a couple of small steps back.

The drawback is that having to flex your abs so hard can make it difficult to establish a strong mind-muscle connection with your triceps. So if you’re training for hypertrophy, then you’re best off sticking with standing resistance band tricep pushdowns.

Performing seated tricep pushdowns with bands feels—in terms of triceps activation—like doing a lying extension because your triceps get put under an intense eccentric stretch. The difference, of course, is that you’re lying on an incline bench rather than a flat bench.

Unlike the cable incline tricep pushdown, however, the seated banded pressdown produces an incredibly intense peak contraction because the more that your elbows become extended, the more that the band becomes stretched, and the more tension it exerts on your triceps.

Although not a deal-breaker, seated banded pressdowns do require a fair amount of core strength because the band is always trying to pull your body off the bench and toward the anchor point.

Performing resistance band tricep pushdowns on an exercise ball is a great way to work your abs while training your triceps.

Although your abs aren’t the prime mover in a stability ball band pressdown, they still have to contract isometrically in order to keep your torso stable and upright.

Using a ball is also helpful for those who want to do pushdowns in a seated position but who don’t have access to a weight bench.

Additionally, you can do the exercise one arm at a time or with both arms working together, depending on whether you value triceps symmetry or training efficiency the most (as mentioned, unilateral exercises take longer to perform than bilateral movements).

The resistance band isometric tricep pushdown challenges both your triceps endurance and triceps peak contraction strength. Improving these attributes enables your triceps to tolerate higher amounts of training volume and also helps you to establish a stronger mind-muscle connection.

Most lifters do iso pushdowns with cables because they believe that cables are superior to resistance bands.

When it comes to getting the most from isometric pressdowns, resistance bands are your best bet.

And most of the time, cables are better than bands. This is because, while bands certainly do provide constant tension, they don’t offer consistent tension like cables do.

Yet, this inconsistent resistance is precisely why bands are the superior choice for isometric pushdowns.

Like a simple rubber band, the further that a resistance band is stretched, the more tension it exerts.

Logically, this means that the contraction is always the most challenging phase of a tricep band pressdown rep because this is the point in the rep where the band is most stretched.

As such, performing an iso tricep pushdown with bands is the way to go if you want to test your isometric triceps strength.

Performing a rocking tricep push down with bands is ideal if you don’t have access to a cable machine but still want to take advantage of Jeff Cavaliere’s awesome pushdown variation.

To get the most from this resistance band pressdown variation, I recommend using a band that has two separate handles because it’ll allow you to achieve a better peak contraction.

Essentially, you start the set with a staggered stance, with most of the weight being on your front foot (your back foot should be on its toes). Then, as you flex your triceps to push the bands down, “rock” back and shift the majority of the weight onto the heel of your back foot.

Complete the rep by releasing the contraction and, as you do, move your body back to the starting position (shift the weight onto your front foot) while allowing a moderate amount of forward shoulder movement in order to increase activation of the long head of the triceps.

Conclusion: Which resistance band pushdown variation is the most effective?

The easiest way to find the most effective type of banded tricep pushdown is to try all of the variations and see which a) produces the most triceps activation and b) is the most comfortable to perform.

That said, if you want to make sure that your triceps are as proportional as possible, then you’ll want to go with some kind of one arm resistance band tricep pushdown so that both of your triceps receive equal amounts of work.

On the other hand, if you want to test your triceps strength, then your best bet is to anchor a heavy bend to a secure attachment point above head height and perform moderate rep (10-15) sets.

Of course, your triceps just respond to tension, so it’s not like they can figure out which kind of resistance band tricep band pressdown you’re doing. Don’t get too caught up in finding the optimal banded pushdown exercise because each movement works the triceps excellently if you lift with the proper form.