How to do a one arm reverse grip tricep extension (pushdown)

Learn how to sculpt symmetrical triceps with the one arm reverse pushdown. 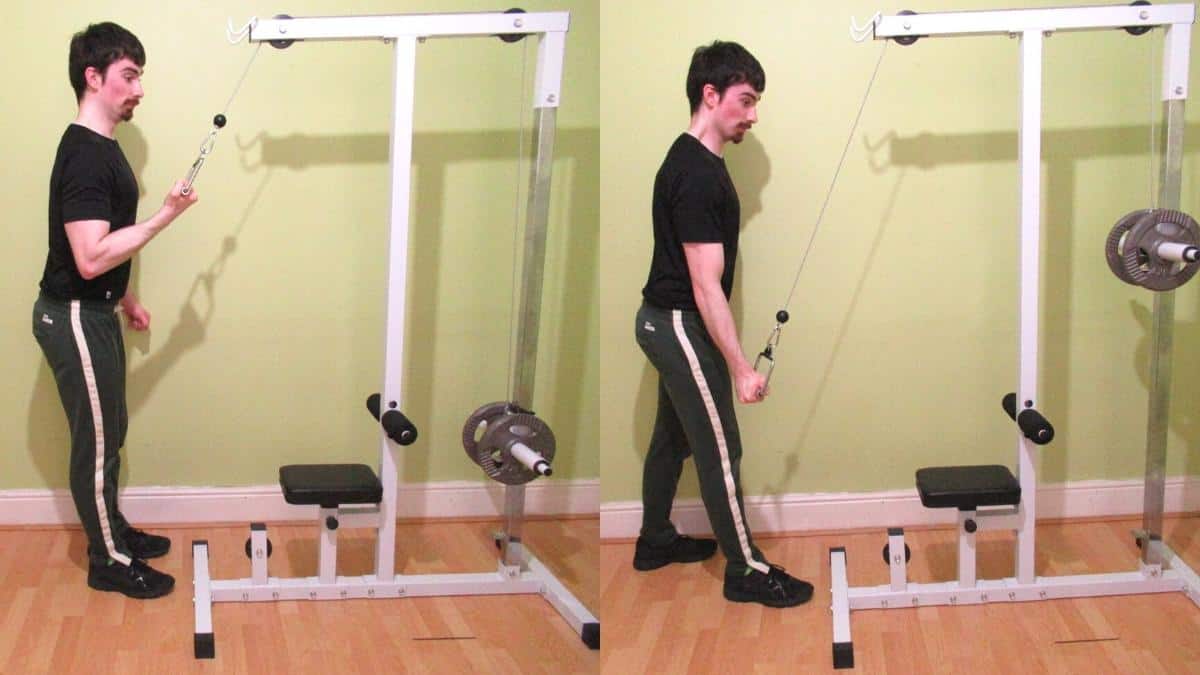 The main purpose of the triceps brachii is to extend the elbow, which is precisely what you're doing during a one arm reverse grip tricep pushdown.

As such, the one arm reverse grip tricep extension, like the cable tricep pushdown, is one of the most effective exercises for maximally isolating your triceps.

Sure, the long head of the triceps isn't as active during pushdowns because the long head acts on the shoulder joint as well as on the elbow. So in order to train the long head optimally, you need to place it in its strongest force-producing position, which is to say that you need to put your arms over your head and then extend your elbows.

However, despite it being the biggest muscle in the triceps, there's no need to train the long head in every exercise that you perform.

The medial and lateral heads need their fair share of work as well, and when you place your arms over your head, the long head gets trained at the expense of the lateral and medial heads. So in order to achieve optimal triceps development, it's critical to do some kind of pushdown (because the long head can’t dominate the movement during a pushdown) as well as plenty of overhead extensions.

This is where the one arm reverse pushdown flexes its muscle-building prowess.

How to do a one arm reverse grip tricep extension

Here are all of the advantages offered by the reverse one arm tricep pushdown, some of which you've probably never considered.

It improves your triceps symmetry

The reverse grip one arm pushdown helps you to develop symmetrical triceps by making you train each arm separately.

This unilateral training style makes your upper arms look more proportional, which in turn enhances the aesthetics of your physique.

Triceps symmetry is also the reason why many bodybuilders and physique athletes gravitate toward the one arm reverse cable pressdown. Having enough mass is essential to get noticed on stage, but if your body lacks symmetry, then you'll never achieve a top place finish in a physique show.

But the benefits of reverse grip one arm pushdowns aren't just aesthetic.

Having balanced triceps development goes a long way toward preventing the bar from becoming lopsided during your compound presses.

Keeping the barbell straight during your bench press and overhead press sets further equalizes the amount of stimulation that your triceps receive and also helps you to lock the weight out more efficiently.

It enhances your mind-muscle connection

Your brain doesn't have to split its focus between two limbs during cable one arm reverse grip pushdowns. This means that you can channel every ounce of your energy and focus into training each of your triceps to the best of your ability.

Having such an intense, unobstructed focus enables you to develop a stronger mind-muscle connection with your triceps, which in turn leads to a better pump and a more potent peak contraction.

Additionally, it's likely that you have a worse mind-muscle connection with your weaker triceps muscle, which, due to its unilateral nature, is something that the one arm cable reverse pushdown can help to correct.

When you can activate both of your triceps to a more or less equal degree, you're naturally able to output similar amounts of force from both sets of muscles.

This makes your bilateral exercises (skull crushers, overhead extensions, close grip bench press, etc.) more effective because, when you have an equally good mind-muscle connection with both of your triceps, they receive similar amounts of stimulation during every exercise that you perform.

It boosts your pressing power and skill

What is a reverse single arm extension in its most basic sense?

It's an elbow extension exercise.

As we established earlier, elbow extension is the primary function of the triceps. It's also the joint movement that occurs during the final phase of a bench press and shoulder press rep.

So by strengthening your triceps via single arm reverse grip pushdowns, you'll also be boosting your bench press and overhead press lockout strength, an asset that's invaluable if you're a powerlifter.

This is because you're getting your triceps used to locking out heavy weights—all by themselves—when you perform a one arm reverse grip pushdown.

It gives your arms a great pump

While it's technically possible to do one arm reverse grip triceps extensions and get great results, you're much better off reserving your low rep training for your free weight tricep extensions and compound presses.

Cable exercises like the single arm reverse grip tricep extension provide constant tension and, as such, are best performed for high reps so that you can maximize metabolite accumulation within your triceps and achieve an awesome arm pump.

This skin-splitting pump is further enhanced by the fact that the one arm reverse cable pushdown produces a very intense peak contraction, which is due to the fact that your shoulder is slightly extended during the movement.

Getting a great pump from the one arm reverse grip tricep pressdown is highly motivating because it makes your arms look bigger and more vascular while you're training, which encourages you to push yourself and test your strength.

It's a highly versatile exercise

The one-arm reverse pushdown is a remarkably versatile movement, especially considering that it's an isolation exercise.

You can do a one arm reverse sitting tricep pushdown if you want to eliminate momentum from the movement, something that's helpful if you often struggle to use the proper form when standing up.

Similarly, you can do single arm reverse tricep pushdowns on a stability ball if you want to work your abs while blasting your triceps (the kneeling tri pushdown is another good option for doing this).

If you want to enhance your triceps endurance and peak contraction strength, then you can also perform a one arm reverse tricep pushdown with an isometric hold.

And, if you don't have access to a cable machine, then the one arm reverse banded tricep pushdown is the way to go.

Conclusion: Is the one arm reverse grip pressdown worth doing?

If you want to build triceps that are symmetrical as well as muscular, then the one arm reverse grip pressdown is definitely worth doing.

While it's true that the one arm reverse grip tricep pushdown adds time to your workout due to the fact that you're training in a unilateral fashion, this extra effort is likely worth the symmetry gains if you already have good triceps development.

If you're a novice lifter, then you might not have enough mass yet to make any symmetry improvements noticeable. Nevertheless, the one arm reverse grip tricep extension is still a reliable insurance policy against future muscular imbalances, which is why it's an excellent exercise for anyone who trains their triceps.