Learn how to do seated tricep pushdowns on a flat and incline bench. 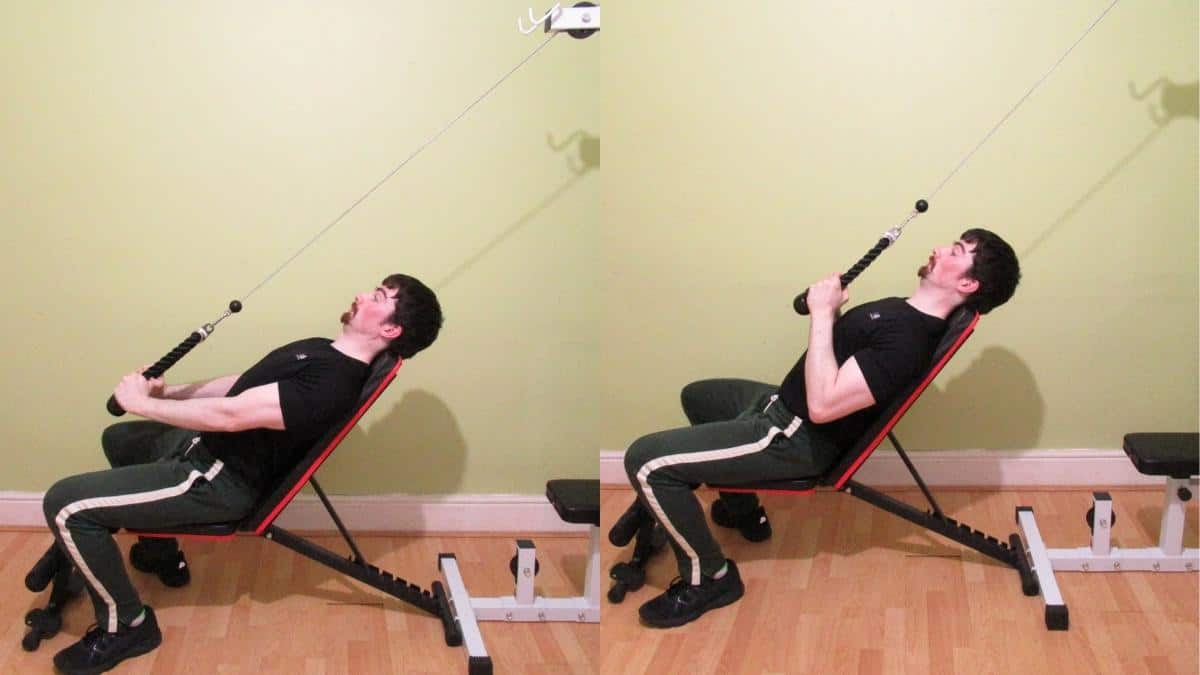 Elbow extension is the primary role of the triceps. But did you know that the biggest head of the triceps, the long head, also has a second function?

In addition to straightening the arm, the long head of the triceps also extends the shoulder. So whenever you raise your arms out in front of you and then perform a pushdown/extension, the long head of your triceps gets put under an intense stretch.

But there are other ways to perform the exercise as well. This guide shows you how to do 9 sitting tricep pushdown variations so that you never lack any training inspiration or workout ideas.

How to do a seated tricep pushdown

Now that you know how to do the rope version, it's time to discover the other ways to do the tricep pushdown on an incline bench.

The sitting tricep pushdown is exactly the same as the standing version in terms of execution.

The difference is that you can't generate momentum with your legs when you're sitting down, which may make it easier to lift with the proper form during the seated triceps pushdown.

Performing your pushdowns in a seated position means that you won't burn as many calories because your leg muscles aren't as active. So if you're trying to lose weight, then it's a good idea to perform your strength training movements in a standing position whenever possible.

Upright seated pushdowns burn fewer calories than the standing version. However, the sitting position also makes it harder to cheat on your reps.

This is because flat bench seated triceps pushdowns have you lift with your arms by your sides, which means that all three tricep heads get worked fairly equally (in other words, the long head can't dominate the movement when your shoulders are in a neutral position).

So if you want to give the lateral and medial heads of your triceps plenty of work, your best bet is to do the seated tricep pressdown on a flat bench.

To work your abs as well as your triceps, you can also do the Swiss ball pushdown.

Performing the straight bar pushdown on an incline bench feels a lot like doing a lying tricep extension, except that the cables provide much more consistent resistance than free weights.

Using a straight bar rather than a rope attachment also enables you to lift more weight because straight bars are easier to stabilize than tricep ropes.

The trade-off is that the straight bar incline bench pressdown is more likely to lead to tricep size asymmetries than the rope version. This is because when you're lifting the same training implement with both arms, there's always a chance that your stronger triceps muscle will dominate the movement, or at the very least, perform more work.

With the rope attachment, on the other hand, you have to lock both sides of the rope out separately, which helps to equalize the amount of stimulation that your triceps are receiving.

EZ bar pushdowns are the ideal exercise for gaining strength over the long term because, unlike straight bars, EZ bars have semi-pronated grips, which naturally put your wrists in a more joint-friendly position.

Therefore, when you use an EZ attachment, which is to say, a curved bar, you don't have to worry about hurting your wrists as you increase the resistance.

In terms of execution, the technique for the EZ incline tricep pushdown is exactly the same as it is for the rope and straight bar incline triceps pushdown.

The only difference is the attachment, so there's no need to change your form when you use a different kind of bar (though you may need to tweak your hand and elbow positions if the attachment is longer/shorter).

Additionally, although we're using an incline bench in the demonstration in order to work the long head of the triceps (it's the biggest tricep muscle, after all), you can also do the movement on a flat bench if you want to work all the heads of your triceps fairly equally.

The v bar tricep pushdown is similar to the EZ pushdown in that it places your hands into a semi-pronated position which, as noted, typically takes a lot of the pressure off your wrists.

However, it's possible that the v bar attachment might still irritate your wrists if you're lifting a lot of weight.

This is because some v bars force you into using a very narrow grip, which can feel quite unnatural for your wrists.

Other v bar attachments allow for a much wider hand position, which, in addition to producing a stronger peak contraction, also puts your wrists in a more comfortable position.

When performed in a standing position and on an incline bench, reverse grip tricep pushdowns produce a really intense peak contraction in your triceps.

This is because when you use a reverse grip, your shoulders have a tendency to become externally rotated, which in turn moves your elbows closer to your sides, which enables your triceps to contract with more force.

The only downside is that you can't actively push into the bar with the palms of your hand when you do incline tricep pushdowns with a reverse grip. So because you can't generate as much pushing force, you'll need to lighten the weight slightly when using a reverse grip.

This resistance reduction isn't necessarily a bad thing, however, because using an underhand grip takes the pressure off your wrists and tends to work your triceps better. Just make sure to grip the bar firmly so that it doesn't fly out of your hands mid-set!

Doing a cable one arm triceps extension on an incline bench is one of the most effective methods for developing symmetrical triceps.

In addition to ensuring that both of your triceps are receiving equal amounts of work, you can use your spare arm to palpitate the working triceps muscles on your opposite arm, a technique that can strengthen your mind-muscle connection and further enhance the effectiveness of the exercise.

Your sets will take longer to perform when you do the incline triceps pushdown one arm at a time.

However, if you have muscular imbalances or just want to make your triceps more proportional, then this extra gym time will be more than worth the symmetry improvements. After all, you don't need much rest between sets because, when you train unilaterally, your spare is resting while your other arm is working.

You can also do the one arm reverse grip pressdown if the overhand version of this exercise puts too much pressure on your wrists.

Don't have access to a cable machine but still want to challenge the long head of your triceps?

The incline band tricep pushdown is the way to go.

Unlike the cable versions of the exercise, which tend to give your triceps a great stretch but not much of a contraction, the banded incline tricep pressdown produces the strongest peak contraction of any exercise in this list.

This is because bands get heavier the more that they're stretched. So while your triceps will still get a good eccentric stretch (if your hands are far away enough from the band's anchor point), your triceps will receive an even better peak contraction because the band will naturally get heavier toward the end of the rep.

If you want to improve your ability to contract your triceps forcefully, then make sure to give the seated iso tricep pushdown ago.

One option is to perform your normal reps, but instead of holding the contraction for a brief second, you'll hold it for 3-5 seconds on each rep.

The other option, which is the best choice for improving your triceps endurance, is to perform a rep and then hold the contraction for 15-20 seconds. In this scenario, one prolonged peak contraction would count as one set, and you'd do 3-5 sets in total.

Because it really makes your triceps burn, the isometric incline tricep pushdown is a great way to finish off your triceps at the end of a heavy session.

Conclusion: Which version of the seated tricep pushdown is most effective?

The best version of the seated tricep pushdown depends on your goals.

If you want to prioritize the long head of your triceps, then do the incline tricep pushdown. This exercise puts your shoulders into a high degree of flexion, which activates the long head since that's the only tricep muscle that acts on the shoulder joint.

To give the lateral and medial heads of your triceps more attention, do the seated tricep pushdown in an upright sitting position on a flat bench.

As for which attachment to use, the rope is most recommended because you can "split" the ends of the rope to intensify the peak contraction. Additionally, rope attachments let you keep your wrists in a neutral position, which is widely considered the most joint-friendly wrist position for resistance training.