Challenge your triceps with these 7 one arm pushdown variations. 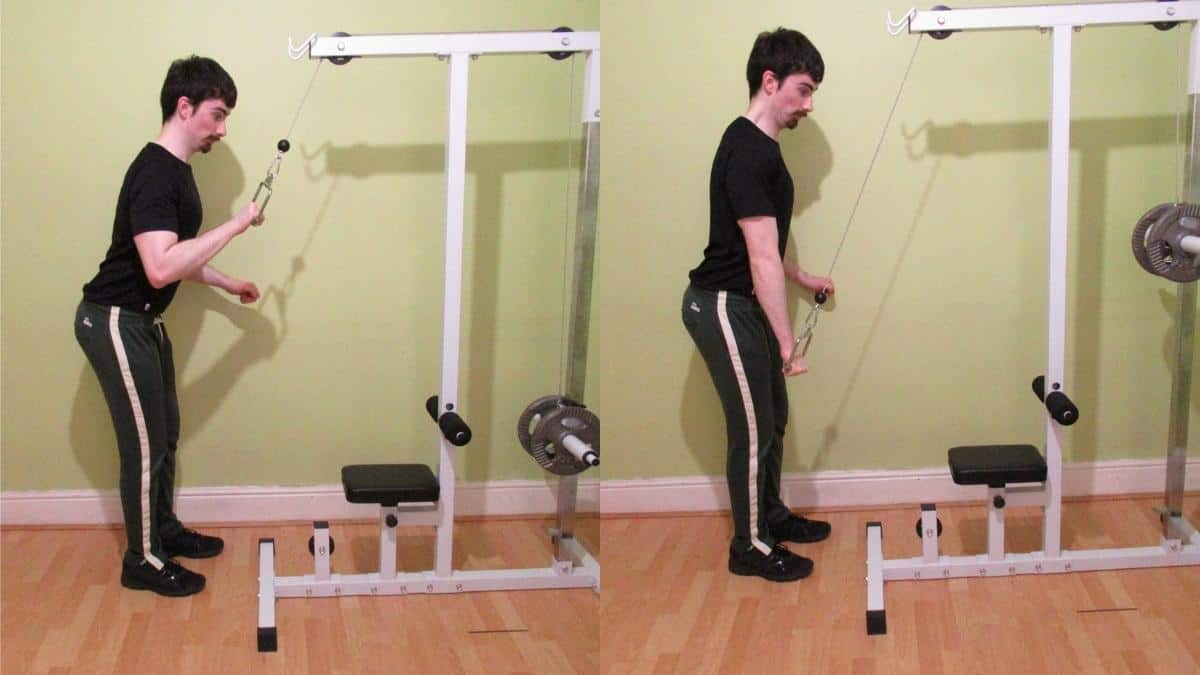 Elbow extension is the main role of the triceps muscles and is also the exclusive function that’s trained during a cable one arm triceps extension. Because of this specificity, the single arm cable extension is an excellent exercise for isolating the triceps, especially the lateral and medial heads.

Unlike the long head of the triceps, which acts on the shoulder joint as well, the lateral and medial heads only act on the elbow. So when you put your shoulders in a relatively neutral position—by keeping your arms pinned to your sides—the long head can’t dominate the movement like it can when your arms are above your head because it’s not in its optimal force-producing position.

The result? All three tricep heads get similar amounts of stimulation during a one arm tricep pushdown and the rope tricep press down. As such, the one arm cable extension is ideal if you’re seeking to grow your triceps muscles in proportion.

This guide shows you how to do 7 single arm tricep pushdown variations with the proper form and then discusses the pros and cons of the exercise.

How to do a single arm cable extension

Here are 6 more one arm cable pushdown variations that you can perform to sculpt symmetrical triceps.

The single arm rope pushdown is the same as the cable handle version in terms of execution. The difference is that when you use a rope, your hand is automatically placed in a neutral position. This joint-friendly grip takes the pressure off your wrist and, as a result, enables you to better focus on training your triceps.

Of course, not all gyms have single tricep ropes. So if all you have is a regular rope attachment, then you can just grab one end of the rope, which will require you to stand further away from the machine in order to get a full range of motion since the attachment is now longer.

Alternatively—and this is my preferred method when no single rope is available—you can do the single arm cable pushdown attachment-free (it's a great tricep pushdown substitute). More on this in a sec.

One arm cable pushdown (no attachment)

Many cable machines, when you remove the attachments, have rubber balls on the end of the cables. These balls are ideal for gripping because they enable you to keep your wrists in a neutral position as if you were doing a one arm rope pushdown.

Since the cables have to travel further when you do the single arm pushdown without any attachments, the exercise tends to exert more tension on your triceps even though the weight on the stack is the same.

If you have access to a dual pulley system or a cable crossover, then you can also save time by grabbing each cable with your respective arms. I recommend grabbing the right cable with your left arm and vice versa, as this “crossover” grip tends to keep the pulleys more balanced, which means that you can put more effort into working your triceps.

Alternatively, if you don’t have access to a cable machine but still want to train your triceps separately, then you can do the one arm banded tricep pushdown instead.

The mid pulley one arm triceps extension works the long head more than the standard one arm pushdown because your shoulder is in a higher degree of flexion (only the long head of the triceps acts on the shoulder joint, remember?)

Since the long head is the largest muscle in the triceps, the mid pulley single arm cable extension naturally has excellent mass-building potential.

Because of this long head emphasis, however, which increases the further your shoulders get toward overhead positioning, the exercise isn’t a direct replacement for the single arm cable pressdown (though it is still a fantastic exercise).

This is because the lateral and medial heads of your triceps don’t get worked as much when your arm is out in front of you since these heads don’t act on the shoulder joint. As such, the long head tends to dominate the movement whenever your shoulders are in a flexed (i.e., elevated) position.

So, by all means, perform the cable one arm extension from a mid pulley. Just make sure to do some kind of pushdown as well so that the lateral and medial heads of your triceps get plenty of stimulation.

One arm pushdown with a twist

Many lifters believe that twisting at the bottom of a cable one arm tricep extension intensifies the peak contraction.

But is this actually true?

The triceps, after all, aren’t affected by your wrist, forearm, or hand position. Or are they?

While your grip on the handle doesn’t directly affect your ability to contract your triceps, twisting at the end of each rep may bring your elbow closer to your side, which in turn leads to a stronger peak contraction.

It’s true that you can twist your wrists without moving your elbows, but in practical situations, joints almost never move in isolation. So when you use an underhand grip, for example, your shoulder becomes externally rotated, which then helps your elbow to move closer to your side.

Personally, though, I don’t feel much difference in triceps activation unless I’m twisting from an overhand grip into a neutral grip.

If you twist from an underhand grip to a neutral grip, for example, then the contraction won’t feel any more intense because your elbow isn’t moving any closer to your side—your elbow is already as pinned to your side as it can be when you do a one-arm reverse pushdown.

Although you’re not training each arm separately during a crossover extension, you are training both arms independently (if you were to do this exercise unilaterally, you’d feel off-balance).

I actually got this exercise from the late John Meadows, and it really is effective for building and burning out your triceps.

Essentially, you stand in the middle of a cable crossover and set the pulleys to the highest position.

Keeping the cables in front of you will make the setup simple and likely more shoulder-friendly. But you can also experiment with placing the cables behind your head, which gives the exercise more of an overhead extension feel.

Both options work well, and your triceps, in particular, the long head, will feel like they’re on fire after just a few sets of these single arm cable extensions.

The one arm sitting tricep pushdown stabilizes your legs and hips and thus renders these two body parts incapable of generating momentum and force.

This means that your triceps have to do all the work because you can’t use any (lower) body English to get the weight moving when you’re sitting down.

If you don’t have access to a weight bench, then you can also do single arm tricep pushdowns on a Swiss ball. Just note, however, that the exercise ball version requires much more core stability since you’re sitting on an unstable surface, which may make it harder to focus on working your triceps.

It’s the same story with the kneeling rope pushdown—you sometimes end up working your abs at the expense of your triceps.

The one arm cable pushdown is close to being a faultless exercise. It’s an excellent drill for building proportional upper arms, and you can perform it with a variety of attachments. However, training unilaterally isn’t always an option for time-pressed lifters.

Pro: It improves your triceps symmetry

The single arm tricep pulldown helps your triceps to look more symmetrical by making you train each arm separately, which ensures that both of your triceps are getting similar amounts of work.

Having a pair of symmetrical triceps will make your upper arms look more balanced and aesthetic.

This symmetry is especially beneficial if you’re a bodybuilder or a physique athlete because it’ll increase your chance of getting a top-place finish in your show.

Having proportional triceps muscles will also prevent the barbell from becoming lopsided during your bench press and overhead press sets. Keeping the bar balanced further equalizes the amount of work that your triceps are receiving and also helps you to lock out the weight more efficiently.

The single arm tricep pushdown is a joint-friendly exercise because it challenges your triceps with smooth, consistent resistance.

While free weights are far from dangerous when used correctly, they tend to put a lot of stress on your joints during certain parts of the rep, something that’s especially true with single-joint exercises like tricep extensions.

The single arm cable extension is what you would call a finesse exercise, hence why it’s often referred to as a one arm tricep pulldown (you’re not just pushing into the attachment with all of your might, you’re trying to move it down with your triceps).

You can do the one arm triceps extension with a single handle (both underhand and overhand), a rope attachment, or with no attachment at all. So it’s not like you’re tied to using one specific attachment, which is ideal if you often train in different gyms that don’t have the same equipment.

As for which attachment is the best, it depends on you. Try all the variations and see which exercise is a) most comfortable and b) provides the best stretch and contraction in your triceps.

The cable handle version will allow you to lift the most amount of weight because you can generate maximum force by pushing into the handle with the palm of your hand.

The single arm rope pushdown is similar. However, it requires more exertion from your gripping muscles because you can’t merely push your palm into the rope like you can with the handle (with the cable handle version, you could technically do the exercise without wrapping your fingers around the attachment, something that’s not possible with a rope).

Con: It makes your workouts longer

As effective as the one arm tricep pushdown is for developing muscular, symmetrical triceps, the exercise isn’t ideal if you only have a short amount of time to lift.

This is simply because you have to do double the number of sets when you train in a unilateral fashion.

Of course, since you don’t have to rest between arms, the extra sets won’t take that much longer to perform. And you could always do them in a literal back-to-back fashion whereby your set for one arm counts as the rest period for your other arm, a technique that’s perfect for burning out your triceps at the end of the session.

Conclusion: Should you do the single arm pushdown for your triceps?

If your triceps already have a decent amount of size but lack symmetry, then the one arm cable extension is definitely worth including in your resistance training program.

While it’s possible to lift heavy during the cable one arm triceps extension, you’re best off performing the one arm tricep pushdown for higher repetitions so that you can establish a stronger mind-muscle connection with your triceps.

For this reason, the one arm pushdown is an excellent finishing exercise to perform at the end of an arm session.

Yet, you can also do the cable one arm extension as the main (or exclusive) tricep movement during a push workout since it isolates the triceps so well.