How to perform a rocking tricep pushdown 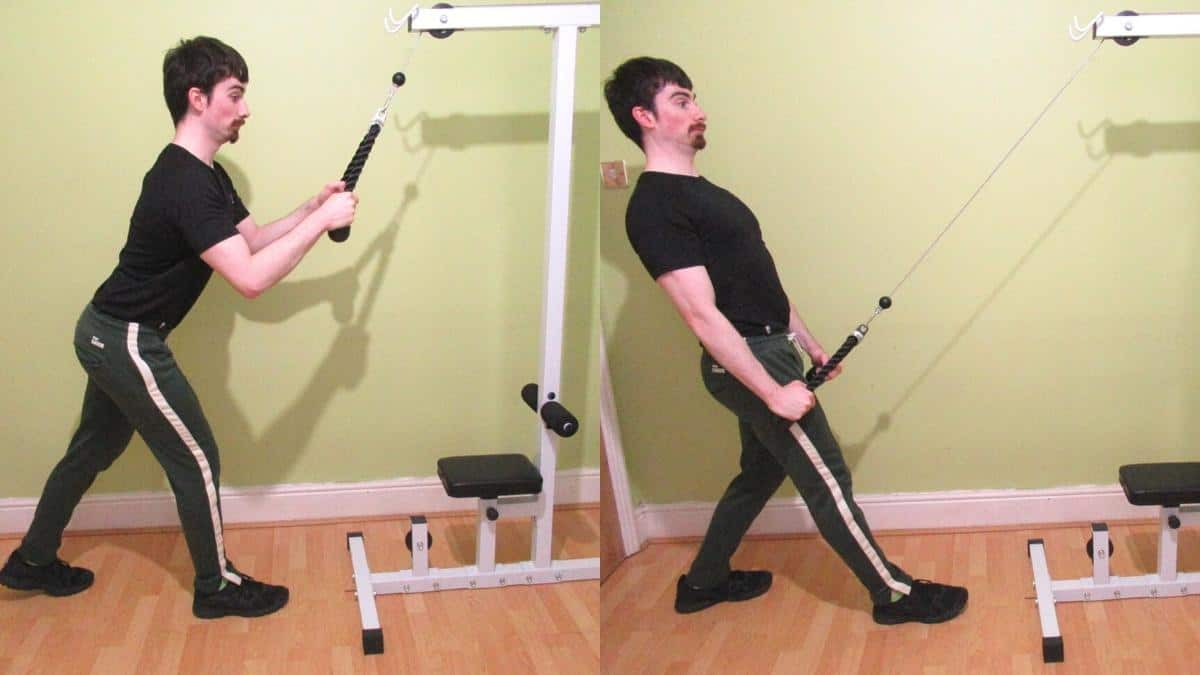 The rocking tricep pushdown trains both of the tricep functions—elbow extension and shoulder extension—and, as such, has excellent mass-building potential despite being an isolation exercise during which you need to lift relatively light.

Jeff Cavaliere of ATHLEAN-X created this optimized version of the rope pushdown, which is known simply as the rocking pushdown.

He’s performed it multiple times in his videos, but I decided to create a tutorial here (actually, a series of tutorials) because I couldn’t find a standalone rocking pressdown demonstration.

In total, you’ll learn how to do the rocking triceps pushdown in 5 different ways. So regardless of what attachments you have, you’ll be able to train your triceps effectively.

Also, check out the tricep drag pushdown, which is another tricep-taxing exercise created by Jeff Cavaliere.

How to do rocking tricep pushdowns

Rocking triceps pushdowns are best performed with a rope because rope attachments allow a greater range of motion than bar attachments. This means that you’re able to achieve a stronger peak contraction because you can get your shoulders into a higher degree of extension.

Yet, if you lift with the proper form, then you can also get great results from rocking tricep push downs by using a variety of other attachments and grips.

Of course, if you don’t have access to cables, then you can get similar results by doing a rocking band pressdown instead.

The rocking straight bar cable press down is a good alternative to the regular rocking pushdown for those who don’t have access to a rope.

The only difference is that, with the straight bar version, you’re using an overhand grip. This has two consequences.

One, using an overhand grip naturally makes your elbows flare out more, so try to keep your elbows tucked to your sides throughout the entire duration of your set.

Second, using a pronated grip is widely known to cause wrist discomfort for many people. But since you won’t be lifting particularly heavy during a rocking triceps pushdown, you’re unlikely to run into any wrist pain, providing that you use the correct technique.

Speaking of technique, the form for the straight bar rocking pushdown is exactly the same as the form for the rope rocking pushdown. You just need to pay closer attention to your elbow position in the straight bar version because, as mentioned, your elbows have a tenancy to drift further away from your sides when you use a pronated grip for pushdowns.

If the straight bar rocking tricep pushdown hurts your wrists, then you can just do rocking easy curl bar pushdowns instead.

As you’d expect, the form is exactly the same.

The only difference is that EZ bar attachments have curved grips, which enable you to lift with a semi-pronated grip and thus with more comfort (straight bar attachments, on the other hand, force your wrists into maximum pronation).

Using a semi-pronated grip also makes it easier to keep your elbows tucked in, which is one of the main form cues for any type of pushdown, especially the more technical variations such as the rocking pressdown.

The rocking reverse grip cable pushdown is a highly underrated exercise and one that you’ll likely never see performed in the gym.

Combining a reverse grip with the rocking technique absolutely lights up your triceps.

Using an underhand grip, as you’ll find out for yourself, pretty much guarantees that your elbows will remain pinned to your sides.

As Jeff talks about in his videos, it’s technically possible to rotate your wrists without moving your shoulders (and thereby your elbows). However, in practical situations, the body doesn’t work in isolation, and that tendency holds true for reverse grip rocking pushdowns.

Using an underhand grip lets you keep your elbows pinned to your sides, which in turn helps you to achieve more shoulder extension during the concentric phase of the rocking pushdown and thus a stronger peak contraction.

If you want to develop symmetrical triceps, then the rocking one arm cable extension is a great exercise for the job.

You can perform it with a single rope, single handle, or—if your cables have grippable balls/rubber on their ends—with no attachment at all.

My choice is the single rope because it enables me to keep my wrists out of trouble by using a neutral grip.

I also like doing the rocking single arm reverse grip tricep pushdown for the same reason that I mentioned above—using a reverse grip really intensifies the peak contraction.

Of course, your sets will take longer if you train each arm separately, which isn’t ideal if you only have a short amount of time for a workout.

Additionally, training unilaterally requires more balance, which is fine. However, having to focus on maintaining your balance isn’t ideal during an exercise like the rocking pushdown, which is very much an isolation exercise that’s designed to trigger triceps hypertrophy.

Why are rocking tricep pressdowns so effective?

Rocking tricep pressdowns are effective because they challenge your triceps with more consistent resistance than regular pushdowns.

Specifically, when you move your body back, the line of force from the cables is no longer going straight down; it’s moving diagonally and applying resistance to your triceps even when your elbows are locked out.

Although you might not realize it at a glance, rocking pushdowns also train both functions of the triceps.

This is because, during the eccentric portion of the rep, you should actually let your shoulders drift forward slightly and thus into flexion.

Then, during the concentric phase of the rep, as you lift the weight, you drive your shoulders toward you while extending your elbows. This puts your shoulders into extension.

What you have here is combined shoulder extension and elbow extension. This is a potent combination that you don’t get during regular pushdowns and one that works the long head of the triceps very nicely indeed.

Add in the aforementioned improvement in resistance consistency, and you can see why rocking pushdowns are such a formidable exercise for building the triceps.

Rocking tricep pushdowns are absolutely worth performing if you want to make regular pressdowns more challenging.

As I explained above, rocking triceps pushdowns tax your triceps in two ways.

First, they challenge your tris with more consistent tension. And second, they provide more long head activation due to the combined shoulder extension and elbow extension.

A rope attachment is most recommended for the rocking pushdown because it permits a more extensive range of motion than bar attachments while also encouraging you to keep your elbows pinned to your sides.