How to do reverse cable curls with the optimal form

Pronate your grip and watch your arms grow. 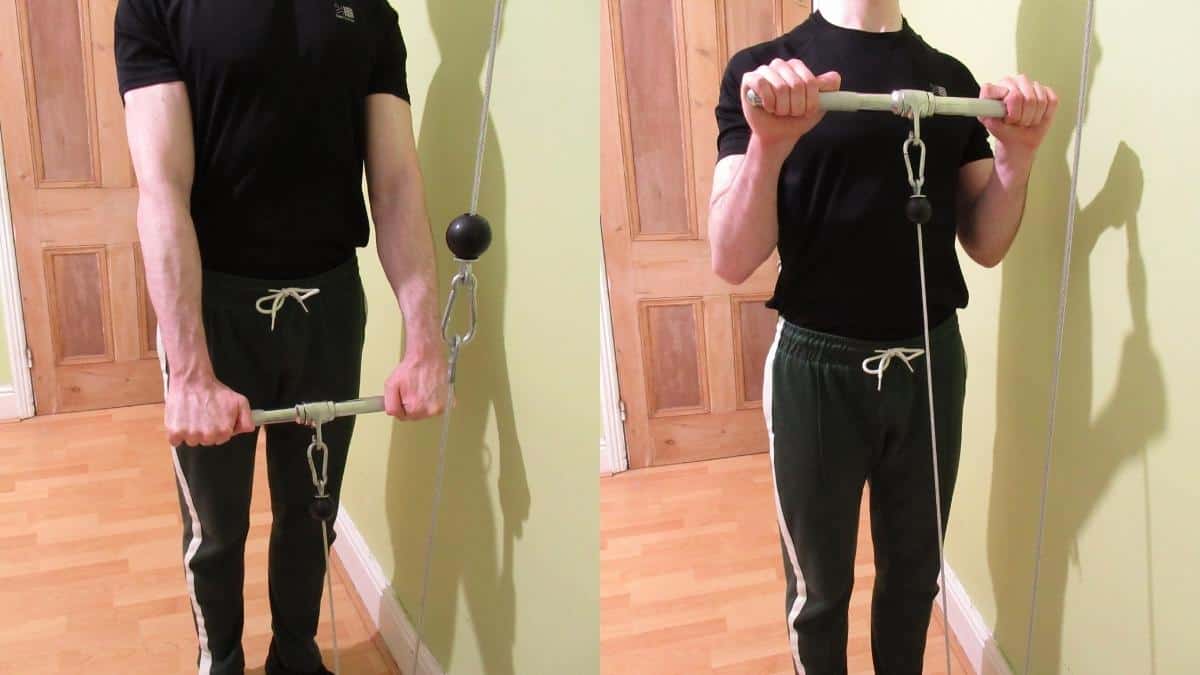 Most cable curl variations work the bicep muscles at the expense of equally important lower arm muscles like the brachioradialis. As such, we have an entire population of lifters with gigantic upper arms and toothpick forearms.

But if you're not gifted with arms like Arnold, you can still make your physique stand out by focusing on the areas that most people neglect. Reverse cable curls, which work the all-important brachioradialis muscle, do just this. But to get the best gains possible, you have to perform reverse curls correctly.

How to do a reverse grip cable curl

Reverse grip cable curls are super straightforward. You just put the pin in the machine and start curling, right? While this line of thinking is undoubtedly correct, there are a few nuances that you must take into account if you want to enjoy the best effects of this mass-building brachioradialis movement.

Partial reps can have their place in your workout as part of a burnout protocol. But their effectiveness heavily depends on the muscle in question. For example, research shows that peak torque for the brachioradialis (the prime mover in reverse cable bicep curls) is highest at 120-degrees of elbow flexion. [1]

Conversely, peak torque for the biceps occurs at about 80-degrees of flexion.

Therefore, if you want to beef up the tops of your forearms, you need to curl the weight as high as possible because this increases the amount of elbow flexion and thus the amount of brachioradialis activation.

Logically, partial reps are waste of time at worst or inefficient at best during cable reverse curls because the biceps remain the dominant muscle group (despite the pronated grip!) unless you curl past 100-degrees of flexion.

You could experiment with partial reps in the top half of the movement, but then you might also be sacrificing muscle growth because you won't be putting the brachioradialis under much of a stretch.

Yet more reason to use full reps whenever possible.

Not using a thumbless grip

Wrapping your thumbs around the bar during a reverse grip cable curl isn't necessarily wrong, but it will reduce the activation of the brachioradialis. [2] This is so because by letting the bar rest on your thumbs, you're engaging the forearm flexors at the expense of the tops of your forearm and your biceps.

This grip is obviously sub-optimal because the forearm flexors aren't the target muscle in an overhand cable curl.

So make an extra effort to use a thumbless grip and really squeeze the bar with the palms of your hands. If such a grip irritates your wrists, then you can always try using an EZ bar attachment, which is typically considered to be more joint-friendly.

You can also try the preacher barbell reverse curl if you want to prevent yourself from swinging the weight up.

Performing it last in your workout

Ever since Pumping Iron came out in 1977, the biceps have, quite frankly, received far more attention than their small size warrants. As such, many gym-goers completely forget about their brachioradialis muscle, which leaves them with an upper-body that lacks any kind of symmetry.

So, if you have lagging forearms like most people, start your arm workout with reverse curls to target the brachioradialis. This is within your best interest if you train for aesthetics because the brachioradialis is one of the most visible upper body muscles in day-to-day life, especially when your arms are hanging by your sides.

If you're looking for a full routine to follow, then you can check out our bicep cable workouts guide for some inspiration. It lists the most effective exercises as well as complete workouts that you can get started with today.

Despite what the lifting technique of some gym-goers may have you believe, the cable reverse curl is, in fact, an isolation exercise. As such, the aim of the movement is to keep as much tension on the target muscles—your biceps and brachioradialis—as possible.

So avoid the temptation to bend your knees and swing your hips in order to lift heavier weights. Bringing other muscles into the equation turns the drill from an isolation exercise into a sub-optimal compound movement.

Instead, initiate every rep with your arms. Your core should be strong and rigid, but you shouldn't be using your major muscles to lift the weight. It's surprising how even a small amount of resistance can set your arms on fire (yeah, lactic acid burns) when you lift with good form.

Lying cable curls are the exact opposite of reverse grip cable curls in many respects because they train your arms in a fully supinated position. This movement is also called the guillotine cable curl, and it's where you lie on a bench with the pulley positioned over your head, a position from which you then curl the bar towards your neck or forehead.

The intense peak contraction, which can help to improve your bicep mind-muscle connection, is the main benefit of this exercise. Because your arms are in front of your body when you perform this drill, and because of the constant tension that cables naturally provide, it produces a much stronger bicep contraction than those provided by free weight movements.

The seated cable curl is another good alternative if it's buff biceps that you're after. With this variation (which you can also do with a reverse grip), you can focus on lifting heavier weights to create overall biceps mass because you don't have to lie in any semi-weird positions. You just curl the weights and squeeze, which makes the setup and execution much more straightforward and most likely more conducive to hypertrophy.

The reverse cable curl is an underrated weight training drill that's easy to perform in terms of technique but tough on your arms nonetheless. When done correctly, this old-school bodybuilding exercise blasts your brachioradialis because it naturally places your biceps in a position of mechanical disadvantage.

As a result, by doing reverse cable curls before your regular bicep training, you'll build a more proportional upper body and freakier forearms now that you're prioritizing the often overlooked brachioradialis.

Since the brachioradialis is predominantly fast-twitch, you can indeed go heavy on your reverse cable bicep curls. However, due to the pronated grip, you probably want to stick to sets of 8-12 reps in order to limit any wrist discomfort.