Here are 4 standing dumbbell reverse curl pros and cons that you need to know about. 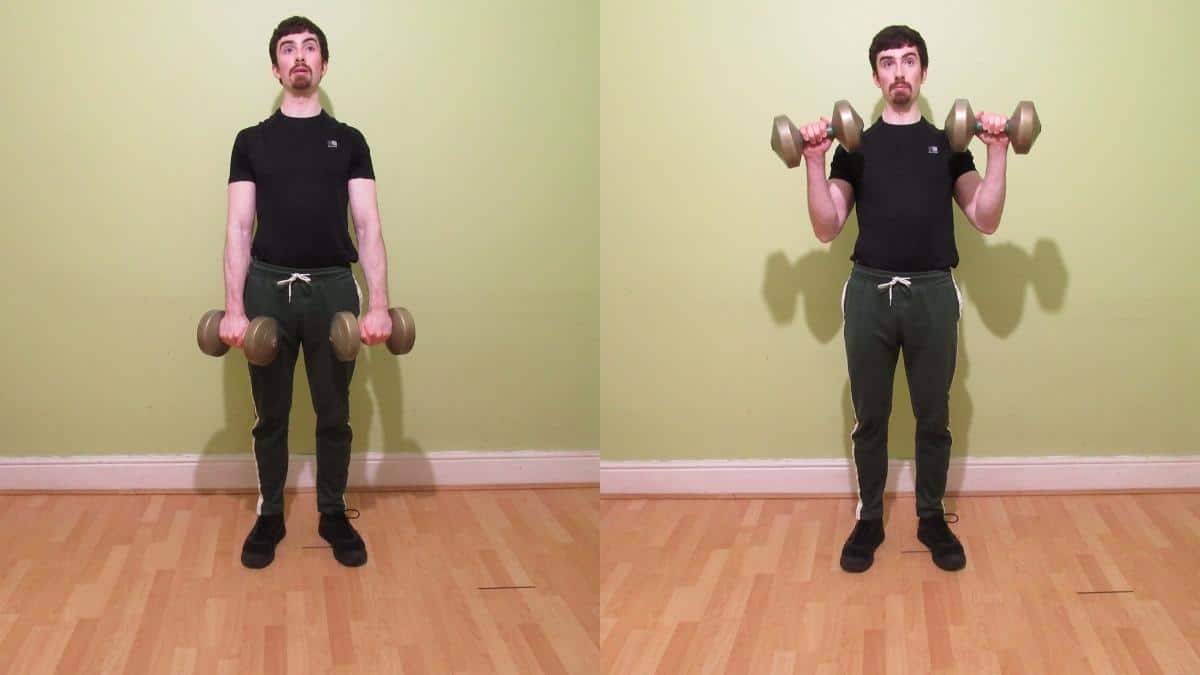 Because of the biceps brachii insertion on the radial tuberosity, the biceps perform forearm supination as well as elbows flexion. Knowing this, you can preferentially target your brachialis and brachioradialis muscles by performing a reverse dumbbell curl.

This is because doing reverse grip curls (i.e., curling with an overhand rather than with an underhand grip) reduces the biceps' ability to produce force, which in turn makes your brachialis and brachioradialis work harder.

How to do a standing dumbbell reverse curl

While the reverse DB curl can definitely add slabs of mass to your arms if you use the proper form, there are still a few drawbacks that you need to know about before including the exercise in your workout program.

Although dumbbell reverse curls still work the biceps to a degree, they primarily work the brachioradialis.

This is the long, thick forearm muscle that runs down the thumb side of your lower arm. [1] It's a powerful elbow flexor that becomes more active when you place your biceps in a position of mechanical disadvantage, which is to say when you curl with an overhand grip.

Since many lifters already have decent biceps but comparatively weaker brachioradialis development, reverse dumbbell curls are an effective exercise for building arms that are not only muscular but well balanced too.

In this regard, the sitting reverse dumbbell curl is another good option. While it requires less core strength than the standing version, you will need a weight bench to perform it properly, which might not be possible if you train at home.

Once you already have well-developed biceps, it becomes worth it to pursue a better peak as well so that your arms look more aesthetic, especially when viewed from behind in a flex position.

Not many lifters know this, but building the brachialis—despite it not being part of the biceps—can actually make the biceps look more peaked by pushing it out. Not only will this make the muscle belly look taller, but it'll also make your arms appear fuller and wider, which in turn will make your upper body look more imposing.

However, since the brachialis has a large proportion of slow-twitch muscle fibers, it naturally grows best from high reps and slow negatives. So after you've done a few heavy sets to focus on the fast twitch muscle fibers, perform a couple of sets where you really lower the weight slowly so that you can burn out your brachialis and make it grow. [2]

There's no getting around it; you're going to have to lift lighter weights during the DB reverse curl than during a supinated curl.

As we mentioned in our biceps workout for females, this strength difference is nothing to worry about, however, because it's completely normal to be stronger on supinated curls. After all, by using an overhand grip, you're naturally putting your biceps in a weak position where they can't supply much force.

The advantage, of course, is that the brachialis and brachioradialis have to do most of the heavy lifting, which gives them a much more potent muscle growth stimulus.

This is much the same for the reverse grip cable curl. The only real difference is that you don't get constant tension with free weights. Either way, don't get tempted to lift too heavy; otherwise, you'll end up using other muscles to swing the dumbbells up and thus take tension off the true target muscles.

Pro: You can do it almost anywhere

The dumbbell reverse curl is one of the most convenient free weight bicep exercises because you can do it virtually anywhere. While it's not entirely equipment-free, it's more accessible than a pronated preacher curl because you don't need any kind of bench. The only requirements are a pair of dumbbells and a small amount of space.

Conclusion: How to get the most from the dumbbell reverse curl

The reverse grip dumbbell curl is a simple yet effective movement for building the brachioradialis, brachialis, forearm extensors, and, to a lesser extent, the biceps.

Unlike the regular version, the reverse dumbbell curl helps you to sculpt more symmetrical arms because you need to lift each dumbbell independently. This ensures that both limbs receive equal work and thus grow in proportion.