How to do seated cable curls for your biceps

Give your legs a rest for more bicep growth. 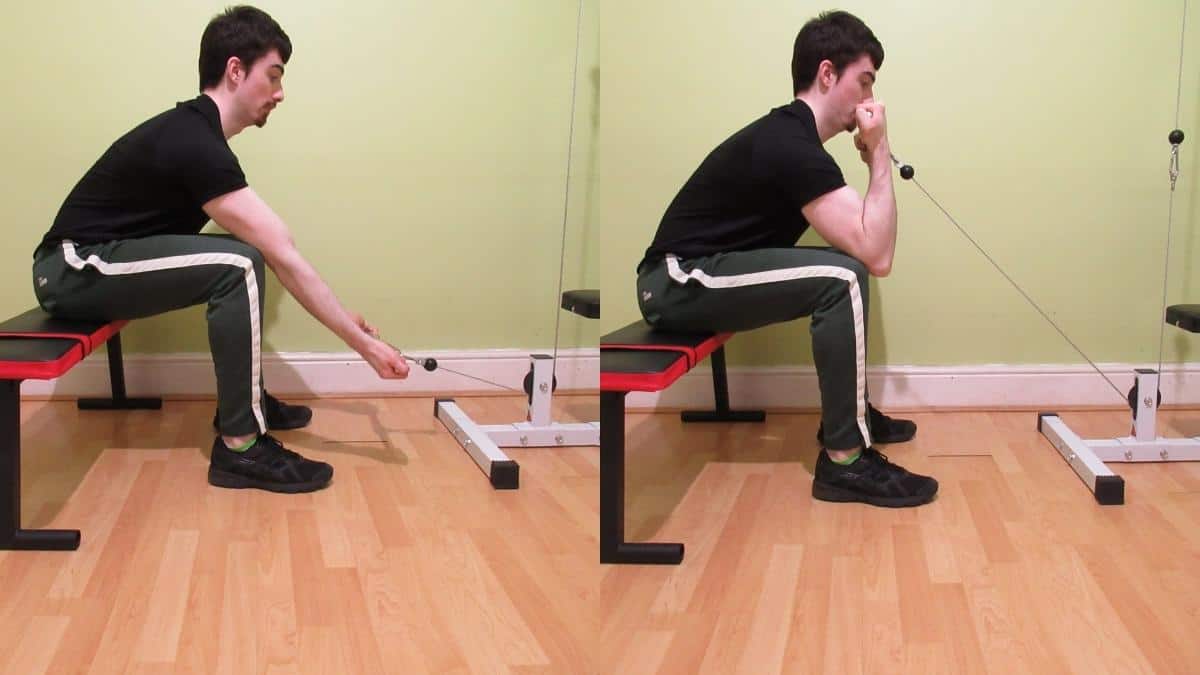 When you think of bodybuilding or weight training, the biceps brachii is usually one of the first muscles to pop into your head. From the front, the biceps make your arms look thick and masculine; from the back, they make your arms appear peaked and powerful.

Although the standard cable bicep curl is certainly a good mass-builder, seated cable curls let you emphasize the peak contraction part of the rep a lot more. As such, they're one of the most effective arm exercises for getting a wicked muscle pump.

The trouble is that most lifters perform the seated bicep curl and the seated cable curl completely incorrectly.

How to do a seated cable curl

First, let's talk about how not to do a seated cable bicep curl.

When most people do seated cable curls, they wheel a bench to a cable column, set the backrest to an upright position, place their forearms on their thighs, and then do a bicep curl. As you can gather from this description, such a lifting technique is sub-optimal because by only letting your arms go as far as your thighs, you're literally cutting your range of motion in half.

The seated bicep cable curl requires more setup time than other arm exercises and may not be feasible in a busy commercial gym. However, if you have the equipment at home or the luxury of training in a quiet gym, then you'll undoubtedly enjoy the benefits of this underrated bicep builder.

Doing seated cable curls, rather than the standing variation, makes it easier to isolate your biceps because you can rest your arms on your knees, a bit like how they're supported during a preacher curl.

This positioning prevents cheating and thus leads to more muscle growth because you can't swing the weight up with your shoulders or legs. Instead, your biceps are forced to handle 100% of the tension—and they get handsomely rewarded for their efforts with better muscle stimulation. [1]

Anytime that you need to squeeze your muscle during training is an opportunity to improve your mind-muscle connection. [2] But the seated cable curl, in particular, is arguably one of the most optimal exercises for the job because the movement becomes more challenging as your biceps become more contracted.

Therefore, by performing this training drill regularly, you'll get used to squeezing your biceps as hard as you can. Not only will this improved mind-muscle connection help you to flex your biceps better if you're a bodybuilder, but it'll also make your regular free-weight bicep training more effective since you won't just be training movements—you'll be training muscles.

In the popular imagination, heavy free-weight exercises are commonly thought of as mass-builders. Cables, on the other hand, are generally considered to be a secondary training tool that you use to get a pump rather than build size.

But this belief is only half true.

Free weights indeed build muscle mass—and plenty of it at that. However, when used correctly, cables can build just as much bicep size as free weights. After all, muscles mainly respond to tension. They have no idea what dumbbells, barbells, and cables are.

You could even argue that bicep cable exercises in general, and seated cable curls in particular, are more effective mass builders because they lend themselves better to bicep isolation since it's harder to cheat the weight up.

This is especially true for the seated variation because when your arms are braced against your knees, you couldn't use momentum to get the weight moving even if you wanted to.

If you find the bent-over torso position that I recommended for seated cable curls uncomfortable, then you can get virtually the same results by performing the cable lying concentration curl instead.

Like the seated cable curl, these guillotine curls work your biceps at a very short muscle length. As such, they naturally produce an intense muscle pump that will leave your arms feeling inflated.

Next up is reverse grip cable curls. This exercise is seldom performed for more than a few weekly sets by the majority of lifters, a fact which is only too evident in their physiques.

The verdict on seated cable curls

The seated cable curl is a fairly common exercise. The trouble is that most lifters perform it incorrectly. So unless you want sub-par gains, don't do this exercise while sat upright because you won't be able to get a proper biceps stretch.

Instead, bend over at the waist and rest your arms on your knees. Curling this way makes the peak contraction way more intense because you're training the biceps in their shortened muscle position.

For more comfort and an easier setup, it's recommended to do your seated cable curls on a row station so that the equipment is already in the correct position. When you're using the bench method, it can be hard to position the bench far away enough from the pulley without getting in people's way.