Learn how standing up and sitting down during curls works your biceps differently. 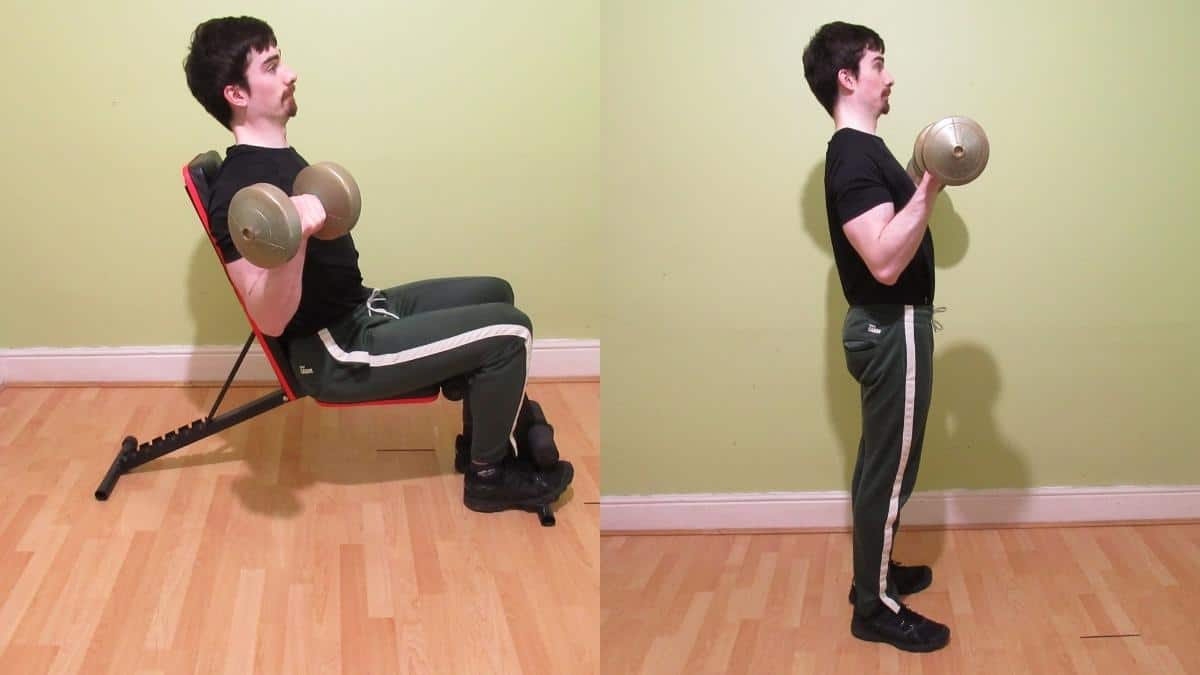 The biceps function to flex the elbow and supinate the forearm, so as long as you use the proper form, does it really matter whether you perform your curls standing up or sitting down?

This article explains the difference between the standing bicep curl and the seated dumbbell biceps curl and then helps you to decide which one is best for you.

Which one is better for gaining muscle?

It's easier to isolate your biceps during seated curls because the core stability requirement of the exercise is lower. In other words, because the bench helps to stabilize your abs, you can focus more attention on simply training your biceps to the best of your ability.

With standing curls, on the other hand, the fact that you have to maintain a much tighter core can make it hard to focus on your biceps.

So if you want to isolate your biceps as much as possible, then seated curls are the better choice. By bracing your back against the bench, you can reduce the movement to simple elbow flexion and keep the vast majority of the tension on your biceps.

You can also do Zottman curls sitting down if you want to focus on your brachialis and brachioradialis muscles in addition to your biceps.

Which exercise is better for gaining strength?

Since both exercises train the exact same movement pattern, you can gain strength on them at equal rates. However, many lifters swing the weights up during the standing version by generating momentum with their hips, legs, back, and shoulders. This gives them a false sense of strength.

With the seated version, however, you can't cheat the weights up with these muscle groups because they're all stabilized by the bench. As such, your biceps have to perform more work, which means that when you do gain strength, you can be confident that it's as a result of your biceps getting stronger and not because of the momentum.

The barbell seated curl is a popular exercise that you can use to bring up the long (outer) head of your biceps. However, due to the fact that you can't get a full range of motion on this movement, it should be used sparingly and only by advanced lifters.

Should you do both movements?

Your best bet is to choose either seated or standing dumbbell curls because they both work the exact same muscles and follow identical joint actions.

However, if you enjoy having variety in your workout regime, then you could do them both but on different days of the week.

Still, it's a better idea to choose one exercise and pair it with reverse seated dumbbell curls instead, seeing as the former works your biceps while the latter trains your brachioradialis. This combination will help you to build more proportional arms because you won't just be focusing on your biceps.

Both seated and standing curls are very similar exercises. However, for maximizing your muscle growth, the seated version is the better choice overall because it makes keeping tension on your biceps easier by removing much of the core stability requirements from the exercise.

But don't panic if you can't get a weight bench to do the exercise sitting down. The muscle activation and strength differences between the movements are minimal. Many lifters will be able to curl just as much weight in a standing position; it's just that sitting down can enhance your mind-muscle connection because you don't need to exert as much effort to keep your abs tight.