How effective are seated barbell curls for building the biceps? 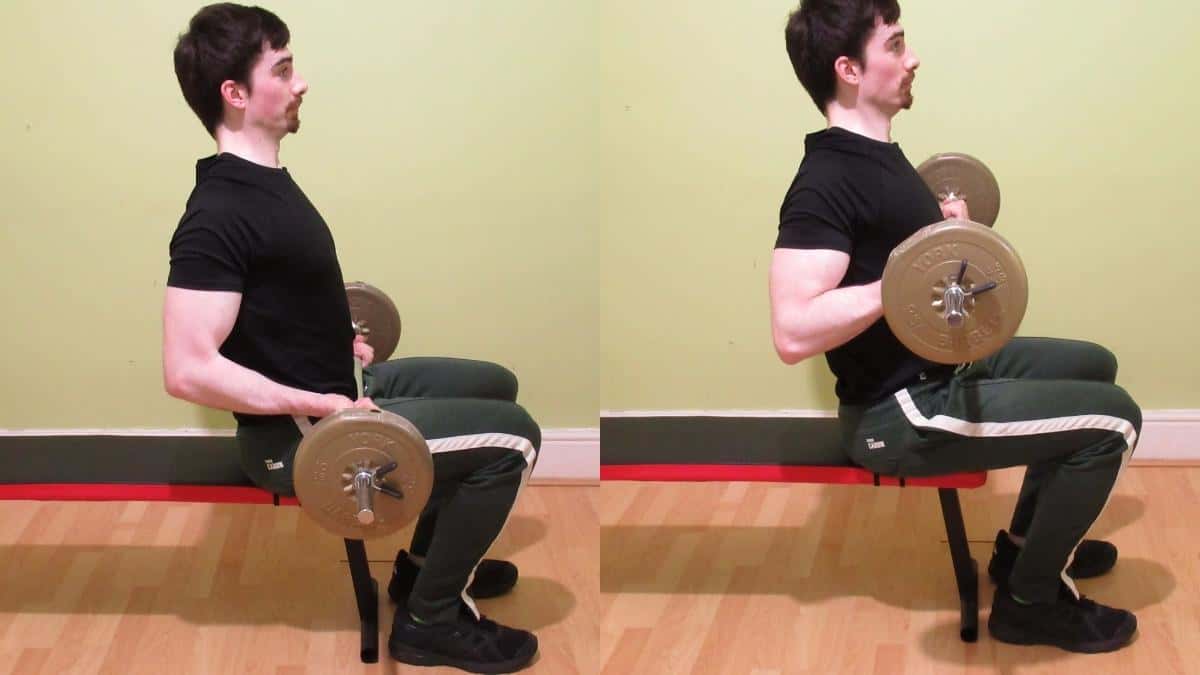 Because of the biceps brachii origin and insertion into the radius and the forearm fascia, you can maximize the effectiveness of the barbell curl by always using an underhand grip. This is because besides elbow flexion (moving your lower arm toward your upper arm), the biceps also perform forearm supination, which is to say, turning your palms up.

The seated barbell curl is a valuable exercise in this regard because it's much harder to cheat the weight up when you're sitting down; hence, you can keep more of the tension on your biceps. The problem is that the movement can impair your range of motion. However, the real trade-off is that seated barbell curls can improve your bicep peak—if you perform them correctly.

How to perform seated barbell curls

Seated straight bar curls are a superb drill to include in your barbell biceps workout—just not as a primary exercise. And you'll soon learn why.

The seated bicep barbell curl encourages you to lift with good form because you can't effectively swing the weight up with your legs, hips, or back when all of these body parts are stabilized by use of the bench.

As a result, your biceps and surrounding arm muscles are virtually guaranteed to get all of the tension from this exercise. Unless, of course, you swing the weight up with your shoulders, which is the single biggest mistake that you can make on a barbell sitting curl.

You would think that its conduciveness to strict form makes the sitting barbell curl good for beginners who are still learning how to feel their biceps working. Actually, the opposite is true. This movement is more suited to high intermediate and advanced lifters who're seeking to add the finishing touches to their physique.

More on that in a minute.

Con: Reduces your range of motion

Virtually no trainer or strength coach recommends performing partial reps unless you're training around an injury or want to burn out a particular muscle at the end of a heavy session. So why do the sitting bicep curl at all?

While it's true that full range of motion training will lead to more overall size gain than half repping, mass building isn't the primary purpose of a sitting barbell bicep curl. Rather, the aim of this exercise is to fix your lagging long head development, presuming, of course, that you actually have a lagging long head.

So while doing the barbell bicep curl seated might seem like a mistake at a glance, there's actually a sound method behind the madness.

To work on the other muscles besides your biceps (brachialis, brachioradialis, etc.), you can do seated DB hammer curls in the same workout as the seated barbell curl.

If you mainly focus on exercises like the straight bar preacher curl or the straight bar spider curl, both of which have you curl with your arm in front of your body, then you might well find that the long head of your biceps is underdeveloped.

You shouldn't worry about this if you're a beginner because your biceps won't yet have enough mass for advanced exercises like this to show their effects.

If, on the other hand, your biceps are well-developed but lacking that width or peak, then bringing up your long head makes a lot of sense.

The trick is to keep the bar very close to your body as you curl the weight. This way, you'll naturally shift more of the tension onto the outer muscle fibers of your biceps since your elbows will be drifting behind your torso, which in turn places the long head under a greater stretch.

The section that you're about the read focuses exclusively on seated barbell curls. To see a complete comparison between sitting and standing positions, click the link to learn the difference between seated and standing dumbbell curls.

You can also do a seated bicep cable curl if you want to do an exercise that's similar to seated straight bar curls but which also provides constant tension.

Alternatively, to focus purely on your brachialis and brachioradialis muscles, you can try doing a hammer curl with a barbell.

Should you do the seated barbell biceps curl or not?

Sitting barbell curls are an exercise of two halves. On the one hand, the movement is close to a waste of time for beginners because it naturally promotes half rep training.

However, this is actually a benefit for advanced lifters because doing a barbell seated curl while keeping the weight close to your body can help to bring up the outer head of your biceps.

This is partially due to the fact that your long head gets put under a more significant stretch when you let your elbows drift behind your body during a curl. But it's also because the brachioradialis and brachialis (the other two elbows flexors) are less active during the top half of a curl. Hence, you can put a greater portion of the tension on your biceps by sticking to the top half of the movement.

For building overall mass, however, full range of motion curls are your best bet. The seated barbell biceps curl is fine as a secondary exercise because it serves a worthwhile purpose. Just don't make it your primary bicep-building movement.