Which exercise is better for muscle growth: triceps extensions or dumbbell kickbacks? 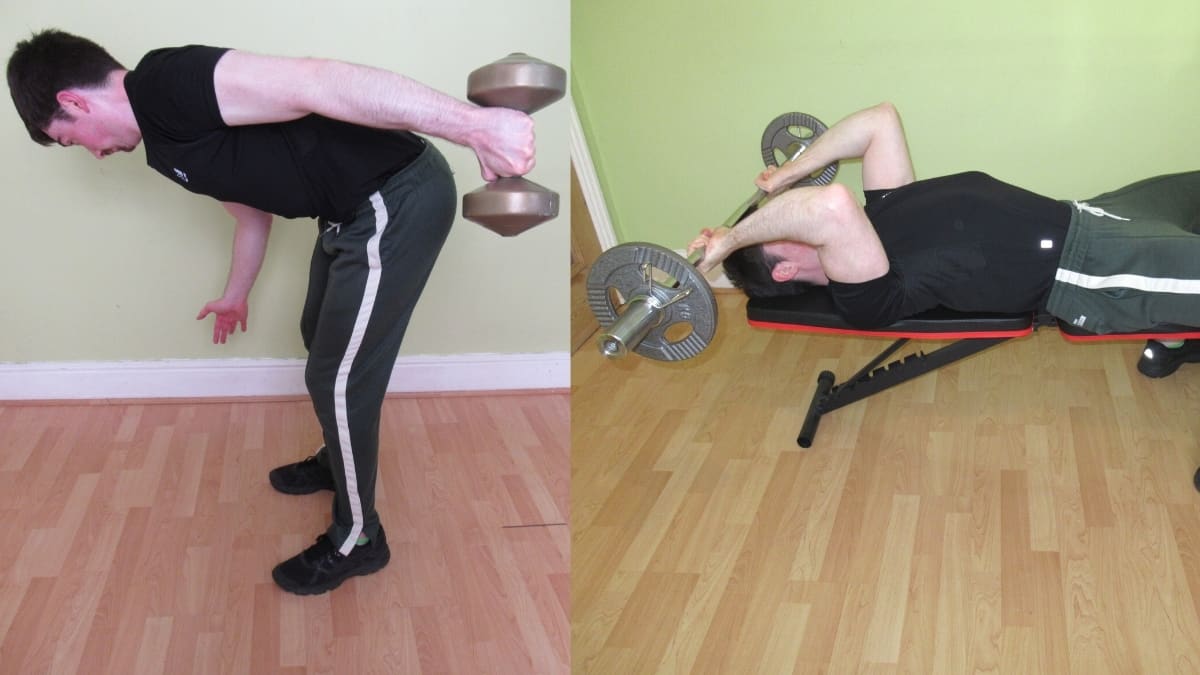 Today we’re comparing the nose breakers exercise (aka skull crushers) against dumbbell kickbacks to see which is most effective for working the tricep brachii muscle.

In this tricep kickbacks vs skullcrushers comparison, you’ll discover which movement is best for building muscle, which is superior for gaining strength, and whether or not you should include both exercises in your routine.

Tricep kickbacks vs skull crushers: Summary of the differences

First of all, it’s important to establish the fact that, as pieces of meat, your triceps only respond to tension. In other words, they have no idea what dumbbells, pounds, or kilos are.

Nevertheless, for gaining maximum triceps mass, you have to prioritize the long head because it’s the largest tricep head by far.

Many lifers believe that kickbacks emphasize the lateral and medial heads of the triceps. And although they work these muscles well, kickbacks actually train the long head more because they place your shoulders into maximum extension.

Since only the long head acts on the shoulder joint, that’s the head that does most of the lifting when your shoulders are extended behind your body, as in a kickback.

Kickbacks, on the other hand, provide your triceps with a far stronger peak contraction than any kind of skull crusher.

But, since you can lift significantly heavier on skull crushers, they provide much more overload for your triceps, which is of paramount importance for building muscle. For this reason, skull crushers are much better than kickbacks for stimulating hypertrophy.

Which one is better for gaining strength?

This one’s simple. Skull crushers are much better for gaining strength than bent over kickbacks.

Kickbacks train your triceps in their weakest (i.e., most contracted) position, which means that the triceps can’t produce as much force during kickbacks as they can during skullcrushers. Hence, you have to lift considerably lighter weights during kickbacks.

Skull crushers and tricep extensions, on the other hand, train your triceps when they’re in a stretched position, and when a muscle is lengthened like this, it’s capable of producing much more force than when it’s contracted.

As mentioned at the start of our skull crushers vs kickbacks comparison, skull crushers are also easier to progressively overload, especially when you do them with a bar. A 1 lb weight increase, which you can implement with fractional plates, isn’t much on a skull crusher, but it could be as much as a 20% increase on a kickback.

Would you ever increase your squat or bench press max by 20%?

Of course not! Not if you wanted to maintain good form.

Since it’s so hard to gain significant strength on kickbacks once your triceps are already relatively strong, you end up lifting the same weight for months and even years on end. So as you can see, extensions and skull crushers (see our skullcrushers vs tricep extensions comparison to learn the difference between them) are much better for gaining triceps strength than kickbacks.

Should you do skull crushers and tricep kickbacks?

You’d be forgiven for thinking that I don’t like tricep kickbacks—that’s not the case.

The only reason that it seems like I’m bashing kickbacks is that they’re up against the most effective tricep mass-builder of all time.

Obviously, if you only have time for one exercise, you should do skull crushers because they overload your triceps with more resistance, thus providing a better stimulus for your time.

For maximum hypertrophy, however, you should definitely do both exercises because they work your muscles from vastly different angles.

While skull crushers place your triceps under a far more substantial stretch (kickbacks hardly stretch your triceps at all), kickbacks, when performed correctly, provide a much more potent peak contraction.

Which movement should you perform first in the workout?

Start with skull crushers because they enable you to lift more weight than kickbacks. Do 3-5 sets of 8-12 reps of extensions and then move onto high rep kickbacks (15-20 reps per set).

Of course, you don’t have to do both exercises in the same session. If you train your triceps multiple times per week, then you could do skull crushers on a heavier, lower rep day in order to build mass.

Then, on a lighter training day, you could perform kickbacks for higher repetitions and train for the pump. Since you’re not going to gain significant amounts of strength on kickbacks without sacrificing the quality of your form, it’s best to stick to high reps and focus on the pump and feel in the muscle rather than on trying to increase the resistance.

The verdict: Should you do triceps extensions or dumbbell kickbacks?

As mentioned throughout this dumbbell kickback vs skull crushers comparison, there’s no need to choose between the exercises; you can and should do both.

While heavy presses and skull crushers will likely account for 90-95% of your triceps growth, you can eke out more development by training your triceps in a shortened muscle position, which is to say, by doing kickbacks.

Just make sure to start your workout with skull crushers so that you can make the most of the exercise’s high loading potential. Since you’re not going to be lifting much weight on kickbacks anyway, it’s fine to do them when you’re fatigued. Kickbacks are, in fact, a great way to end your workout, especially when you perform them for high reps.