Learn the key differences between these two common tricep exercises. 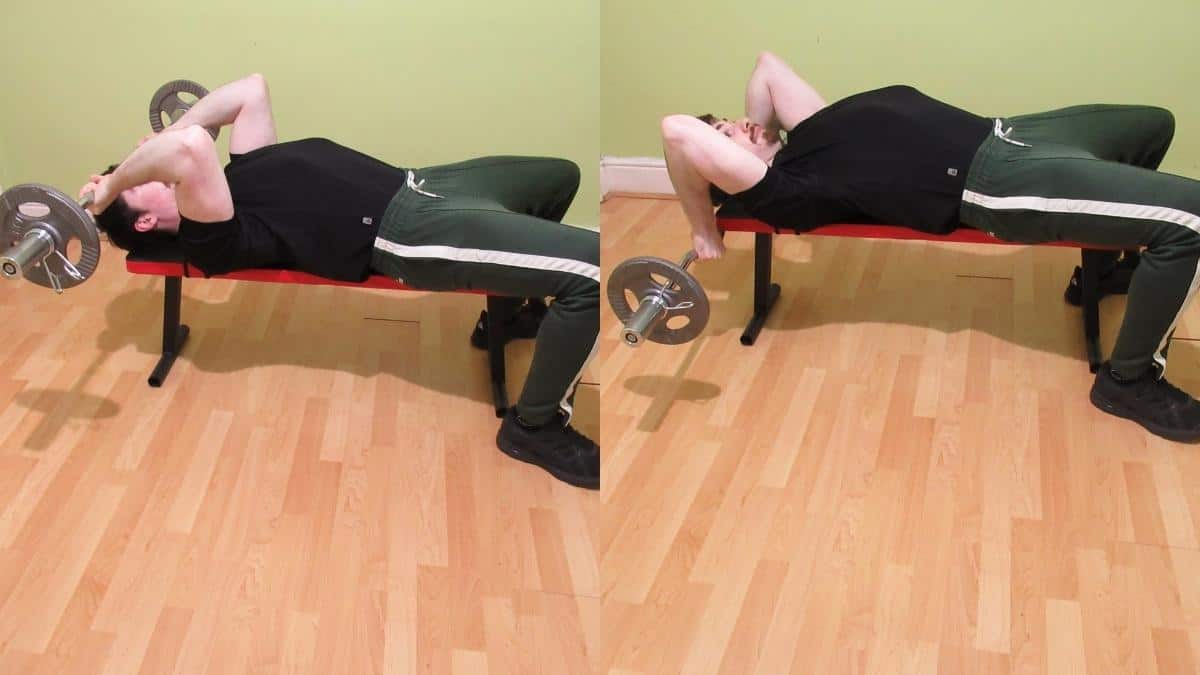 What's the difference between the EZ bar skullcrusher and triceps extensions?

Are skull crushers and lying triceps extensions the same thing?

As you'll soon learn, skull crushers and triceps are extensions are either identical exercises or completely different movements depending on who you ask.

So the first port of call in our lying tricep extension vs skullcrushers comparison is to define what we mean by triceps extension.

In its most basic, biomechanical form, a triceps extension is simply an elbow extension. First, you actually flex your elbow to put the triceps under a stretch; then, you extend your elbow to contract your triceps and complete the rep.

So a triceps extension could be a skull crusher, an overhead extension, or it could be a pushdown.

These three exercises are all types of tricep extensions.

Let's take a look at the variations, one by one, and see how they differentiate from one another.

Let's get straight into it.

A lying tricep extension and a skull crusher are virtually the exact same exercise.

On the other hand, lying triceps extensions are almost always performed by lowering the bar behind your head (otherwise, it would be a skull crusher).

So while you could argue that a true skull crusher involves bringing the bar down to your face, this isn't advisable—for most people—if you want to maintain healthy elbows. This is perhaps why the exercise has morphed into a behind-the-head extension in recent times—it's just better for your elbows, and it gives your triceps a greater stretch.

You can also see our French press vs skull crusher comparison to learn how skull crushers stack up against another popular kind of tricep extension.

Overhead extensions are performed in either a standing or seated position and always have you lower the weight directly behind your head and neck.

Skull crushers are always performed in a lying position, and because of this, they allow more shoulder movement than overhead extensions.

This is significant for the triceps since the long head performs shoulder extension as well as elbow extension.

So by allowing some back and forth shoulder movement during your skull crusher reps—something which isn't possible with overhead extensions—you're actively training both functions of the long head at the same time and giving your triceps a better workout because of it.

Overhead extensions also place your shoulders into a higher degree of flexion and, as such, generally put more strain on your rotator cuffs than skull crushers.

The disadvantage of skull crushers is that, however unlikely, there's always a risk that you could drop the bar on your face. So make sure that you grip the bar firmly (thumbs around the bar, please) and avoid lifting excessively heavy weights.

If we take cable tricep extension to mean a pushdown, then the movement is very different from skull crushers.

Pushdowns are great for developing the lateral and medial heads of the triceps because these two heads don't cross the shoulder joint. Thus by doing pushdowns, you're optimally training the only function of these heads: elbow extension.

Pressdowns, since they're typically performed with cables, also put less pressure on your elbows than skull crushers.

But for building the most prominent triceps head—the long head—skull crushers are superior because they permit large amounts of shoulder movement and thus train both functions of the long head: elbow extension and shoulder extension.

The crucial take-home message is that you don't have to bring the bar down to your face during skull crushers just because the exercise name has the word skull in it.

You will, in fact, keep your elbows safer and give your triceps superior stimulation by lowering the bar behind your head because then you'll be training both functions of the long head.

Also, just because tricep extensions and skull crushers are similar doesn't mean that you can't do more than one variation. A good setup in this regard would be to do heavier skull crushers for the long head, followed by cable extensions to focus on the lateral and medial heads.

To see how skull crushers compare to a compound exercise, check out our skull crusher vs close grip bench press comparison. You might be surprised at the differences.

I hope that this tricep extension vs skull crusher comparison cleared up the differences for you. As you can see, there are multiple ways to name and categorize exercises, and, for this particular kind of exercise, both extensions and skull crushers are appropriate names.