Tricep pushdown vs skull crusher: Which one is better?

Learn whether you should do skull crushers or cable pushdowns for maximum triceps mass. 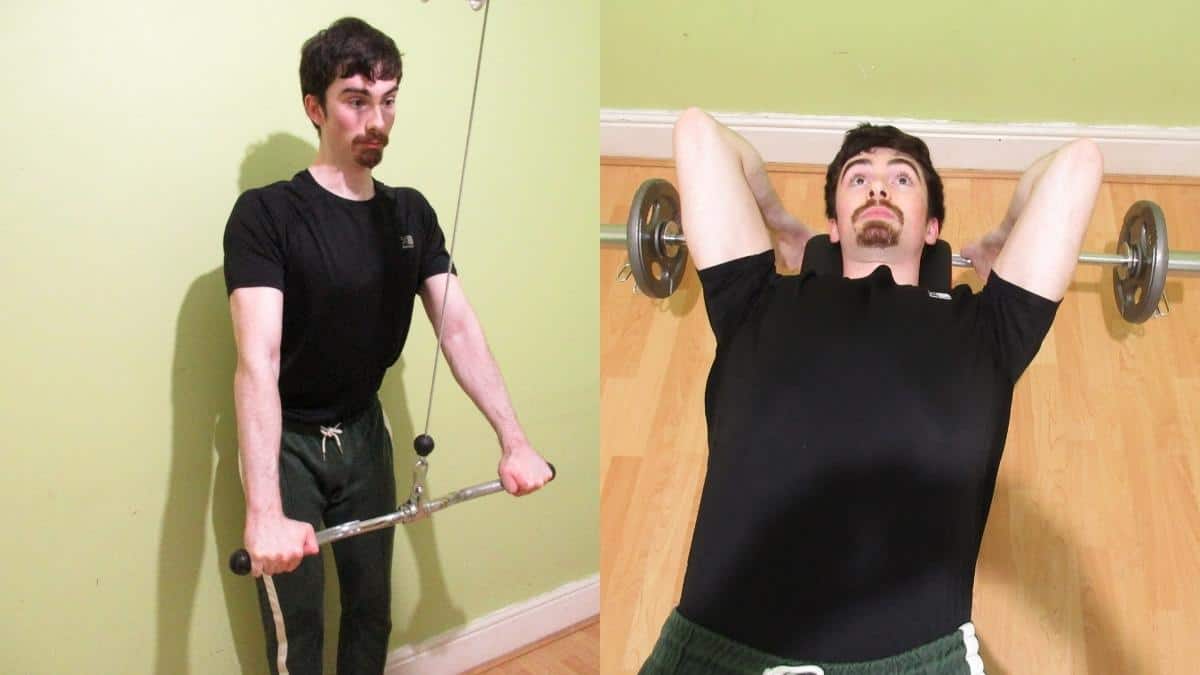 Both the tricep skull crusher and the tricep pushdown are excellent exercises for building your triceps and thus bulking up your arms (the triceps account for about two-thirds of your upper arm size).

But which movement is the most effective for building the tricep muscles?

As you'll soon learn, the answer depends on which head of the triceps you want to work.

Unlike the lateral and medial heads of the triceps, the long head (the biggest head) crosses the shoulder joint and thus has a dual function: elbow extension and shoulder extension.

So since skull crushers, when performed correctly, allow for some back and forth shoulder movement, they're better for recruiting the long head than tricep pushdowns.

On the other hand, research shows that straight bar pushdowns are optimal for targeting the lateral head of the triceps.

Similarly, rope pushdowns have been shown to elicit higher levels of activation in the medial head.

This makes perfect biomechanical sense because pushdowns are a pure elbow extension exercise.

Hence, the lateral and medial heads are performing most of the work (the long head is still active to a degree, but it's not maximally recruited because your arms are by your sides).

Given that both skull crushers and pushdowns isolate the triceps, whichever exercise enables you to overload the triceps with more resistance—you would think—builds more muscle.

However, this line of reasoning is complicated by two crucial factors.

Since skull crushers and pushdowns are done with different equipment, the resistance isn't equal. Performing a 100 lb pushdown is easier than doing a 100 lb skull crusher because the former exercise requires less stabilization.

So even if you're lifting heavier weights on pushdowns, you may not actually be challenging your triceps with any more tension than you would with a lighter skull crusher.

Second, since skull crushers train the biggest of the three tricep heads—the long head—better than pushdowns, they're likely superior for gaining size.

This isn't to say that the lateral and medial heads aren't important for gaining mass because they most definitely are. It's just that gaining maximum mass requires emphasis of the long head, something which skull crushers help you to more easily achieve than pushdowns.

All else being equal, a bigger muscle is a stronger muscle. So based on this line of reasoning, skull crushers are better than pushdowns for increasing the strength of your triceps because they build more mass due to their long head emphasis.

That said, strength has a significant skill component to it, which is one reason why many powerlifters can out-lift bodybuilders despite having smaller muscles.

Strength is also highly specific; if you want to get strong at pushdowns, the best exercise to increase your strength is pushdowns. It works the same way with skull crushers.

But what about compound lift strength?

Should you do skull crushers before pushdowns?

You should ideally do skull crushers before tricep pushdowns because they require more stabilization and are slightly more complicated to execute correctly; thus, they also need greater output from your central nervous system.

Since skull crushers are better for building triceps size, you also want to perform them for lower reps than pushdowns. Again, low repetition work is best done at the start of your session when you're at your freshest and capable of producing the most force.

If the lateral or medial heads of your triceps are severely lagging behind your long head, however, then you could make a case for beginning your workout with pushdowns.

Still, if you're trying to beef up your arms, then you can never have too much long head development, so you should probably always start with skull crushers if maximizing triceps hypertrophy is your primary goal.

In a similar vein, if you can't choose between triceps extensions or dumbbell kickbacks—two more very popular tricep drills—then check out our comparison to see which exercise is the most effective.

You don't need to do pressdowns and skull crushers, but doing both exercises is certainly a good idea.

Skull crushers emphasize the long head, whereas pushdowns give more attention to the lateral and medial head.

So while you don't have to do these two exercises specifically for optimal triceps development, you do need to train all three heads via isolation exercises of some kind.

You can see our French press vs skull crusher comparison for more exercise ideas and to learn how skull crushers stack up against another popular movement.

Which exercise is safer?

While skull crushers aren't unsafe when performed with the proper form and an appropriate amount of weight, they do carry a higher injury risk than pushdowns.

Skull crushers tend to put more torque through your elbow joints than pushdowns, something that you can lessen by lowering the bar behind your head rather than to your face.

Additionally, there's always the risk, no matter how small, that you could drop the weight on your head during skull crushers. So make sure to grip the bar tightly and only use a weight that your triceps can truly handle.

Is a skullcrusher and tricep pushdown the same movement?

No, skull crushers emphasize the long head of the triceps and are always performed lying on a bench.

Conversely, pushdowns focus on the lateral and medial head of the triceps and are typically performed in a standing position.

For this reason, your best bet is to perform both exercises if you want to achieve optimal triceps development.

Hopefully, our tricep pushdown vs skull crusher comparison cleared up the key differences. While the exercises certainly share a lot of similarities, they both emphasize different areas of the triceps and have a different lifting techniques.