French press vs skull crusher: What are the differences? 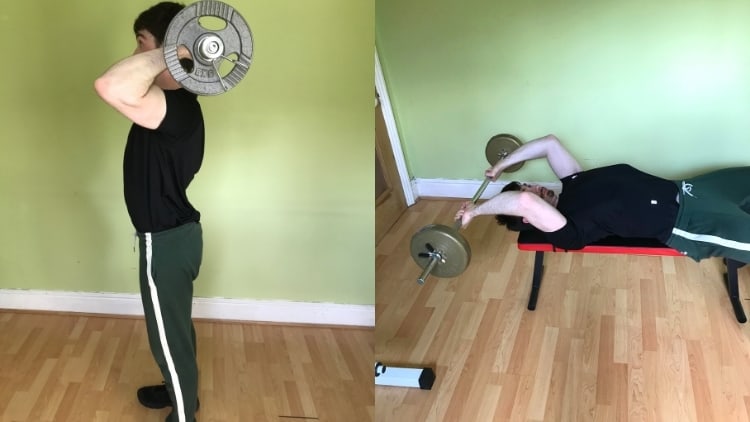 To some lifters, the French press and the skull crusher are the exact same exercise.

But to others, the movements are far from equal and in fact, have some rather unique, if nuanced, differences.

This standing French press vs skull crusher comparison illuminates the key differences between these two heavyweight tricep exercises and explains which one is best for building the triceps brachii.

Table of Contents show
What’s the difference between the French Press and Skull crusher?
Which one is best for triceps growth?
Do you need to do both exercises for optimal triceps development?
Which exercise should you do first?
Which one is safer?
French press vs skull crusher: The verdict

What’s the difference between the French Press and Skull crusher?

The main difference between the French press and skull crusher is the position in which the exercises are typically performed.

Skull crushers are always performed in a lying position, and you can lower the bar to your chin, forehead, or—and this is most recommended—behind your head.

French presses, on the other hand, are usually performed in a seated or standing position, and, as such, you always lower the bar behind your head.

Some people, of course, consider the skull crusher and the French press to be the exact same exercise—both forms of triceps extension (see our tricep extension vs skull crusher comparison for more info).

Which one is best for triceps growth?

Many lifters already know that the long head accounts for most of your triceps mass—roughly two-thirds.

Unlike the medial and lateral heads of the triceps, the long head performs shoulder extension as well as elbow extension. As such, for optimal development, you need to perform exercises that train this dual function simultaneously.

Both skull crushers and French presses are excellent exercises in this regard.

However, for gaining maximum mass, skull crushers are likely better than French presses because they allow for more shoulder movement and thus better activation of the long head.

With the French press, your shoulders are in a fixed position. So while you’re getting a good triceps stretch, you’re not getting as much long head recruitment because your shoulders aren’t as free to move forward (i.e., extend) as they are during skull crushers.

Similarly, the French press provided virtually zero tension at the top of the rep because your joints are supporting the weight. But with skull crushers, if you keep your shoulders back slightly, then you can actually still get some triceps tension even when your elbows are completely locked out.

Do you need to do both exercises for optimal triceps development?

There’s no need to do the skullcrusher and the French press for optimal triceps growth because they both work the same muscle and have a virtually identical movement pattern (though, as mentioned, skull crushers permit more shoulder movement).

In fact, for this reason, it may actually be unadvisable to do both exercises within the same workout because you’re essentially just performing the same movement twice.

You’d be much better off picking one of them and then doing different exercises to work your triceps from more varied angles.

You can, of course, do both exercises but on different days of the week. This approach lets you train your triceps with a higher frequency (great for hypertrophy) while enabling you to perform more quality training volume since you won’t need to do the exercises back-to-back (so you’ll be less fatigued and able to lift heavier weights/do more reps).

Which exercise should you do first?

Since skull crushers allow for more shoulder movement than the French press, they typically enable you to lift more weight, which means that they’re likely a better mass-builder.

For this reason, it’s a good idea to do skull crushers before the French press so that you can overload your triceps with the most amount of resistance.

Any differences between these two highly similar exercises are minimal but nonetheless worth noting when you’re in pursuit of maximum triceps hypertrophy.

Also see our dips vs skullcrushers comparison if you want to learn how skullcrushers stack up against a popular bodyweight exercise.

Which one is safer?

Since the French press puts your shoulders into a higher degree of flexion than skull crushers, it typically also places more strain on the rotator cuffs.

In my experience as a coach, more people also experience elbow issues with the french press because your elbows remain in a fixed position.

On the contrary, skull crushers allow for liberal amounts of shoulder movement (and thereby elbow movement) and generally take tension off your elbows by involving, via a long head stretch, plenty of shoulder flexion and extension.

Dropping the bar on skull crushers is, of course, much more dangerous (at least for you) than losing control of the bar during French presses because the weight could fall on your face and cause a severe injury.

Let’s go over a quick recap: The French press is usually performed standing, whereas the skull crusher is always done in a lying position.

Although it’s possible that you could drop the bar on yourself (though highly unlikely if you maintain a firm grip on the bar and don’t lift excessively heavy), skull crushers are safer than French presses because they don’t place your shoulders in an extreme amount of flexion, something which can hurt your rotator cuffs.